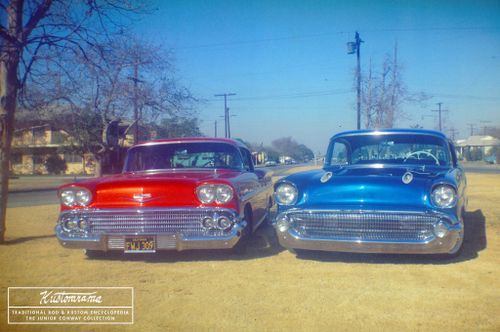 Candy Apple Beauties! Most of us know Phil Curry's mildly restyled 1957 Chevrolet Bel-Air from the cover of Rod & Custom July 1963. This photo was snapped right after Junior had given it a Candy Blue over White Pearl base paint job at his shop Junior's House of Color. The freshly painted 1958 Chevrolet belonged to Danny Dingillo. Photo courtesy of Junior Conway. 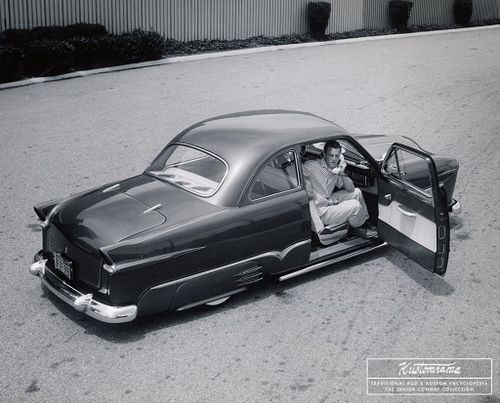 A photo of Junior with the second version of his 1950 Ford. This iteration became known as "The Teardrop," and the photo was taken at the Compton Drive-In in the spring of 1957, a well-used location for photo shoots. Unfortunately, the place is long gone, torn down. Photo courtesy of Junior Conway. 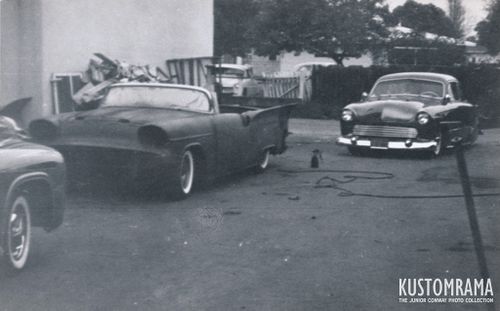 A construction photo of the Aztec with Junior’s Shoebox in the back. Junior was involved in painting the Aztec. The truck to the left is Johnny Zupan's 1956 Ford. Photo courtesy of Junior Conway. 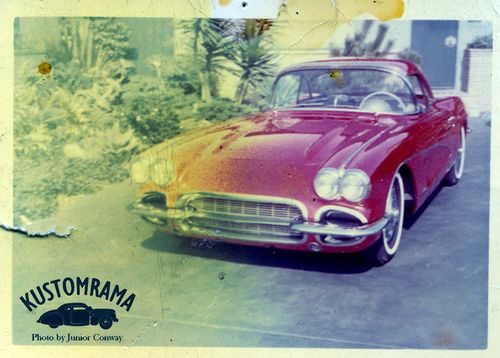 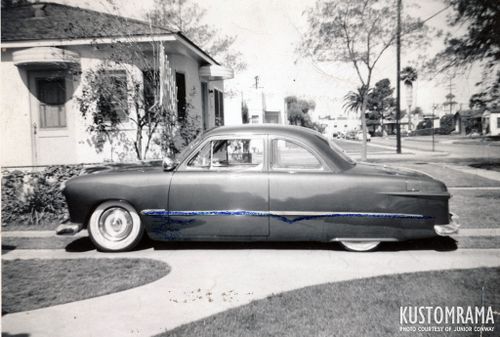 An early photo of Junior Conway's 1950 Ford, showing a sidetrim suggestion drawn with a ballpoint pen. Notice the flames on the front fender as well. Photo courtesy of Junior Conway. 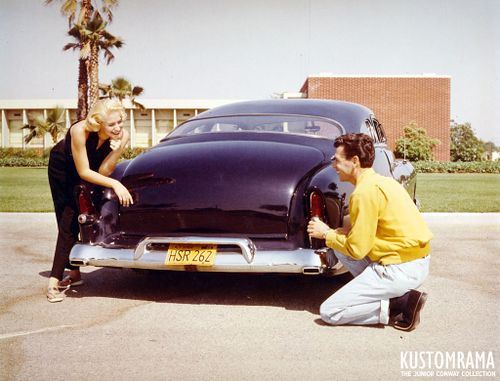 A photo of Buddy Alcorn with his Ayala and Barris Kustoms restyled 1950 Mercury custom. We believe the girl in the photo is his sister Donna. Photo courtesy of Junior Conway. 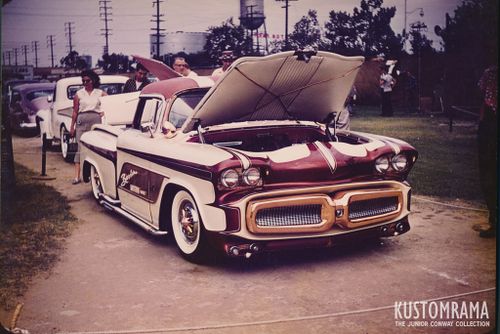 The Kopper Kart at an outdoor car show in 1958. The Rod & Custom Magazine’s Dream Truck and Bob Metz's 1950 Buick, the XM105 can be seen behind the Barris Kustoms promotion vehicle. Photo courtesy of Junior Conway. 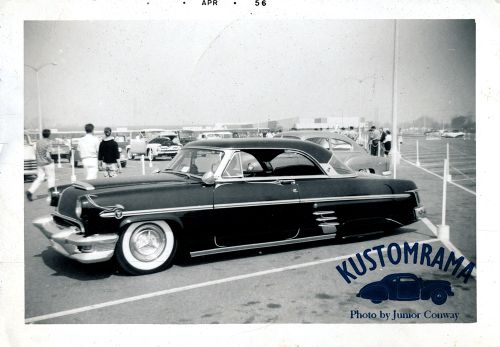 In January of 1953, Herb Conway bought a mildly restyled 1950 Ford. He sold the car to his little brother, Hersh "Junior" Conway, who turned it into one of the most famous shoebox customs of the 1950s. After selling the Ford, Herb bought a 1954 Mercury in December of 1954 that he decided to give a mild custom treatment. Photo courtesy of Junior Conway. 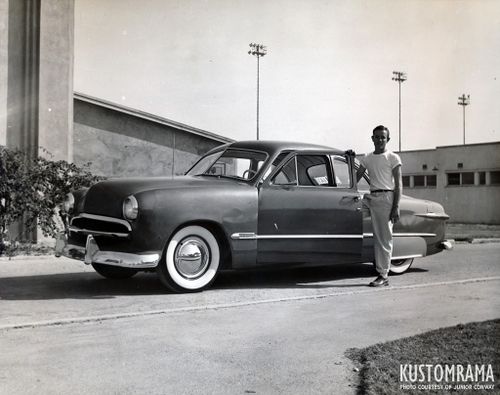 In 2013, while living in Lynwood, Olav Kvipt of Kustomrama was able to become friends with Junior Conway; "While living in California, I was lucky enough to visit a lot of the old-time customizers and painters that I’ve had read and heard so much about while I was growing up in Norway. One of these guys was Herschel “Junior” Conway."[1]

One Wednesday afternoon after work, late in July, Brad Masterson and Olav had lunch at Bob’s Big Boy Broiler in Downey, a really popular hang-out place back in the 1950s for car enthusiast. The place had recently been restored back to how it appeared in its hay days, and every Wednesday night there was a gettogether where people displayed their cars, eat food and talk shit. "After finishing up a greasy cheeseburger, I suggested to go and check out Junior’s House of Color, which was only a town west of Downey, in Cudahy."[1]

"We cruised by in Brad’s green chopped fastback on the way back home. We could not see any lights on inside the front office, however I spotted Junior’s Ford truck parked by the curb. I stepped up to the front door of the shop, peaking into the office. Since the door was locked, I knocked on the window to check if there were anyone there. Apparently, I set off the alarm. Nice first impression! Then Junior showed up from the alley behind the shop, thinking some thugs were breaking into his place. He saw our ride and quickly realized that we were custom folks. He told us that he was bothered with some punks doing graffiti on his building, so he kept watch to catch them red-handed. We quickly hit it off, and Junior welcomed us into his shop. Inside was a variety of different cars, Junior is ranked as one of the best painters in the world, and as Bill Hines quoted, “He’s the only one that does million dollar paint jobs”."[1]

Inside the paint booth was a rare Porsche 911RS Carrera. In the shop was Hitler’s old Mercedes, Jesse Lopez T-Bird, his daughters’ Mustang and a 1940 Ford Coupe. "He showed us around, showing us all the details, explaining the procedures to achieve such premium craftsmanship that went into these cars. You know it’s pricey when the panel is as smooth and glossy on the inside, as on the outside! Yes, Junior cuts and buff the inside of fenders, hood, and trunk by hand! He also cuts and buffs the exterior all by hand as well. We talked until midnight and were left stunned by all the stories we heard. He has an incredible memory and remembers everything down to the smallest detail. I asked him if I could come back later to look at his photos, and he promised to gather as many photos as he could so I could scan them!"[1]

One by one, the photos Olav scanned will be added to this page, so be sure to check back every now and then.

Please get in touch with us at mail@kustomrama.com if you have additional information or photos to share about The Junior Conway Photo Collection.