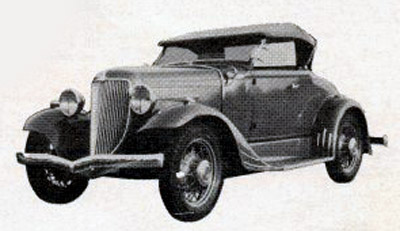 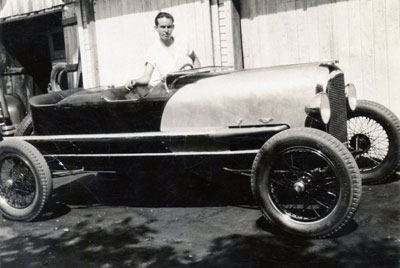 One of the first known organized amateur speed trials was held at Muroc in 1931. It was sponsored by Gilmore Oil Company of Los Angeles. The driving force behind the event was George Wight, the owner of Bell Auto Parts. George realized that something had to be done to coordinate the haphazard dry lakes meets. He got Gilmore Oil Company to sponsor the speed trials if the hot rodders could come to an agreement regarding rules and regulations. Early in 1931 Wight sent letters to rodders in the area inviting them to an organizational meeting to be held in East Los Angeles. The rules that were made were fairly simple in the beginning. In the interest of fairness, classes were established according to engine type: Model T flatheads, Model T Rajos, Model T Frontenacs and Chevrolets, Model A flatheads, and Model A overhead valve conversions. Supercharged cars were not allowed to compete. The first organized meet was held March 25, and the second was held April 19, 1931. The speed trials were open to all cars within the designated class. A pace car would start up a dozen racers at a time. At around 50 mph the pace car would drop back and the racers would continue to accelerate to the finish line. No "wildcat warmups" were allowed, and any car that jumped the start would be given a penalty of a hundred foot handicap when the race was restarted. The need for safety was recognized, and cars returning from a speed run were limited to 40 mph. The cars ran as a group, and the two fastest cars from each class were eligible to run in the open competition from which a single winner would emerge. No records exist of the two Gilmore sponsored runs held in 1931, but it has been documented that Ike Trone won the Gilmore trophy for first place in the Main Event at the second met on April 19th. Ike ran a fenderless, stock bodies 1929 Ford Model A roadster with a Riley head.[1]

Before the 1931 season ended, the Muroc Racing Association had been formed, complete with officers and a race program. It collected a one dollar entry fee which was used to meet the expenses. The same year the Purdy Brothers developed an electrical timer to clock the cars speeds. These two helped formalize the meets radically.[1]

Hot Rods Built or Completed in 1931

Custom Cars Restyled or Completed in 1931

Please get in touch with us at mail@kustomrama.com if you have additional information or photos to share about 1931.