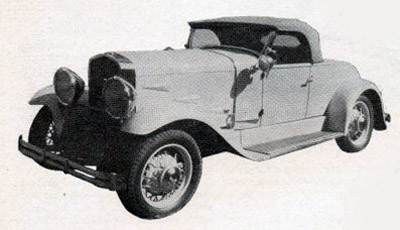 Due to the great depression taking place, it wasn't common for a teenager to have his own car in the 1930s. If you were lucky enough to have a car, you took care of it, and didn't trade it off because the fashion had changed. One such lucky teenager was early custom pioneer Frank Kurtis. Frank, who was manager of Don Lee's Los Angeless Coachworks, owned a 1928 Ford Model A Roadster that he had bought new. The car was somewhat restyled, featuring a chopped top and windshield. When the 1930 Fords arrived at the showrooms, Kurtis quickly made deal for a set of fenders. The 1930 Ford fenders were longer and more graceful, and called for more car. Frank mounted the A-Bone's transverse front spring on a perch in front of the crossmember, race car style. With a longer wheelbase, Frank face lifted the old Model A with an extended the hood, home fabricated radiator shell and grille. He installed Cadillac headlights and 18-inch wheels. Franks's Model a Custom was quite sensational for its time. There was nothing "hung on" it, except for a spotlight, and a new trend in smoothing the lines of stock cars was emerging.[1]

Custom Cars Restyled or Completed in 1930

Please get in touch with us at mail@kustomrama.com if you have additional information or photos to share about 1930.