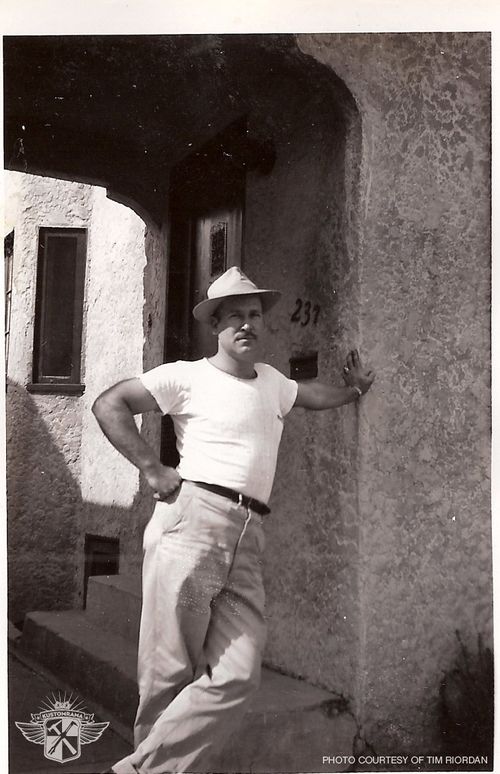 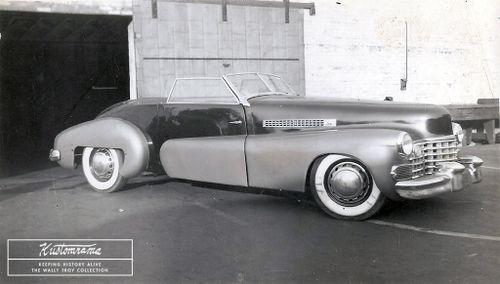 A Cord with a Cadillac front. Tim believes this was a wrecked car that Wally installed a Cadillac drivetrain and a 2-speed rear end from an Auburn on. Photo courtesy of Wally Troy, provided by Tim Riordan. 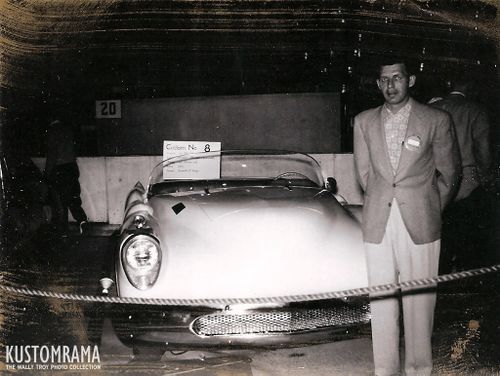 A photo of Kenneth Kamp with his fiberglass-bodied Otter at an indoor car show. We believe this photo was taken at the 1954 Indianapolis Custom Auto Show. Photo courtesy of Wally Troy, provided by Tim Riordan. 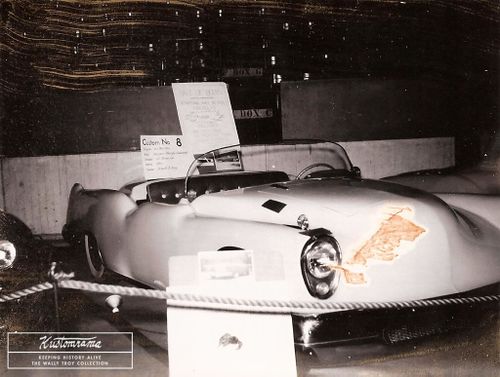 Kenneth, who went by Ken, ran a body shop in Norwood, Ohio in the early 1950s. He worked for General Motors as well, and in 1953, when Chevrolet came with their fiberglass-bodied Corvette, he decided that he wanted to get ahead of the market and build a fiberglass-bodied car. Kamp built nine cars between 1953 and 1955. None of them were accounted for in 2020. Photo courtesy of Wally Troy, provided by Tim Riordan. 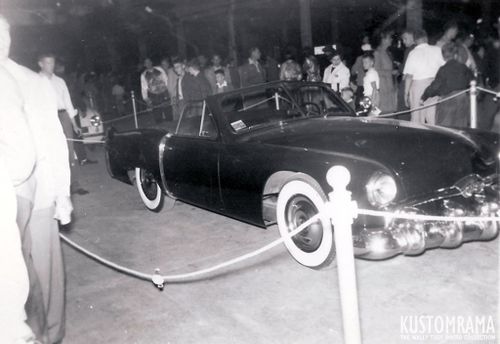 A photo of the Frantz Custom taken at the 1954 Indianapolis Custom Auto Show in Minneapolis, Minnesota. Photo courtesy of Wally Troy, provided by Tim Riordan.

Walter J. Troy was born June 1, 1914 in Bay City, Michigan, the son of August and Martha Froz Troy. Wally’s father moved his young family to Detroit where he could find more opportunity to practice his carpentry trade.[1]

After completing the 8th grade, Wally felt ready for life. He told a story of leaving home, hopping a train to anywhere, only to have the train stop at the same train yard he began from at the end of the day. He then worked at odd jobs which instilled an interest in automobiles. Wally’s first car was a worn out Model T Ford his uncle gave him when he was 14 years old. He used spare parts from area salvage yards to modify the car, thus began a love for customizing cars. A few years later he hopped a train again and this time he got off in Chicago. He stood on a street corner near the train station (after exiting the train) pondering his next move when a car pulled up to the corner. As luck would have it, Wally recognized an acquaintance from home who asked Wally what he was doing in Chicago. Wally responded, “I’m looking for a job.” The acquaintance said he was working for Joe Shaheen’s salvage yard in Springfield, Illinois, and invited him along. Wally hopped in the car.[1]

Wally was employed for three years by H. & H. Auto Parts in Springfield until his entrance into military service. There he gained experience as an automobile mechanic. He disassembled, repaired, and overhauled engines, transmissions, clutches, etc., of automobiles and trucks. He ground valves, adjusted brakes and aligned wheels. His heart was not in mechanic work – but auto body.[1]

Wally married Janet J. DeRosa on December 9, 1941. He served in the U.S. Army during World War II from August 1942 to January 1946. There he was an automotive mechanic NCO. He supervised 24 men in the control and coordination of motor transport activities. He served with the 167th Field Artillery for 22 months in the Philippines and Japan, and Netherlands East Indies.[1]

At the war’s end, Wally and Janet lived a short time in Glendale, California running a body shop with Janet’s brother and his longtime friend, Joe DeRosa. In 1947 Wally and Janet moved back to Springfield and purchased a Standard Oil Station located at 2907 S. MacArthur Blvd. The station was turned into Wally’s Garage. Later Wally expanded his business by becoming a Southern Auto Supply dealer. At the shop, Wally catered to the newly forming hot rod scene with custom auto speed parts. The building was large enough for Janet to also operate “Wally and Janet’s Restaurant” while Wally ran the garage on one side and the gas station on the other. Behind the businesses Wally’s carpenter father built them a small two-bedroom house at 1014 W. Maple South from which they never moved.[1]

In 1952, Wally wanted to prove to himself he was as good if not better than the big boys at customizing autos. His first attempt was to customize and enter a 1950 Oldsmobile "88" Convertible at the 3rd annual Indianapolis Custom Auto Show. Wally's build was based on a wrecked 1950 Oldsmobile 88 Convertible, and total investment was $6000, although magazines published a figure of $2200. The build reportedly took 8 months to complete. Once completed, Wally's Olds received lots of attention at the Indianapolis Custom Auto Show, and it was featured in several magazines such as Hot Rod Magazine August 1952, Hop Up September 1952, and Motor Trend September 1952. In Trend Book 105 Restyle Your Car the Olds was named one of the year’s top 10 customs by editors of Motor Trend Magazine. At the Indianapolis Custom Auto Show Wally won the “Special Award for Outstanding Design” with the “Troy Special”. Preston Tucker, was in attendance at the show and made a point to stop Wally and tell him the 1950 Oldsmobile was the finest car in the show. Wally would later say that hearing praise from Tucker was better than any 1st place trophy! Wally was not the sentimental type when it came to his vehicles, and he sold the Troy Special locally not long after it was completed.[1]

Two years after Wally debuted the Troy Special he was invited to attend the 1954 Speedorama Auto Sports Show in Minneapolis, Minnesota. For that show he set off to build another custom, dubbed the Troy Custom, out of a 1953 Buick convertible. The Buick frame was modified with Buick and Cadillac body sections. The taillights, quarter panels and rear bumper on the car were mostly late model Cadillac parts, and the engine and running gears were also borrowed from a 1953 Cadillac. Wally used to complain about cars being lowered at the time were not drivable when the springs were cut in order to lower the profile of the car, so instead he sectioned 9 inches out of the entire body, retaining the original suspension. When Wally arrived at the Speedorama Auto Sports Show in Minneapolis, the Troy Custom could be driven directly down the ramp to the convention center hall with no issues, while many other lowered customs had to be dollied sideways down the ramp to prevent them from bottoming out. The show provided $50 a day to Wally as an invited participant. He was also given a brand new Jaguar to drive while at the show, since entries could not be removed until after the show. At the show, the "Wally Custom" was parked next to GM's new Buick cars of the year, and show attendees wanted to know how to buy the sleek convertible. The dealers had to explain potential customers that it was not a production car being offered. Due to this, Wally's car was eventually moved to accommodate Buick and their display. Wally won the best custom award at the show, and according to Wally, George Barris had entries at the show as well. When George heard the news about Wally winning best custom he got furious and attempted to remove one of his cars. Security stopped him as soon as he started it up. When they told him he couldn't remove his car until the show was over, George punched the accelerator with the car in neutral redlining the engine, blowing a rod out of the side of the engine block. The explosion rocked the convention hall and spilled oil everywhere. As with the Troy Special, Wally sold the the Troy Custom not long after it was completed as well.[1]

By the end of his career, Wally was making 1964 and later Mustangs into convertibles. Troy died in 2000 at the age of 85. One of the last things he worked on was a 1957 Cadillac that he was making into an El Camino. The build was never completed, and Wally had it buried at his farm west of town.[2]

Thanks to Tim Riordan the Wally Troy Collection has found its way to Kustomrama.

Please get in touch with us at mail@kustomrama.com if you have additional information or photos to share about The Wally Troy Photo Collection.