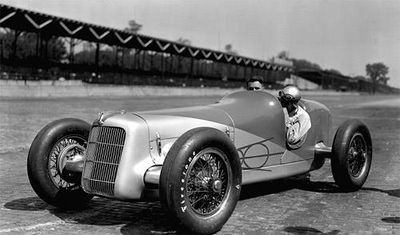 One of the race cars Preston Tucker and Harry Miller built for Ford.

Preston Thomas Tucker (1903-1956) was a car-crazy kid who hung around auto speedways and grew up to create an automobile called the Tucker, a car that was years ahead of its time. He was a man of pioneering spirit, ingenuity and daring, who revolutionized Detroit in the 1940s with his stunning "Car of Tomorrow." It was streamlined, futuristic and fast--the car every American dreamed of owning, at a price most people could afford.

Preston Tucker teamed up with Harry Miller to build a few race cars for Ford at Indy.

After his first automotive venture with the Tucker 48, Preston managed to salvage his machine shop in Ypsilanti, Michigan. Short after the end of the Tucker 48, Preston began thinking about a new car, the new Tucker. In 1952 Preston met Alexia de Sakhnoffsky. At the meeting, Preston presented the basic ideas of his new Concept Car. The Carioca was planned to utilize a maximum number of available parts, and a minimum of parts that had to be built from new tooling. The Carioca should also be a car that could be put together with little difficulty. Preston wanted to build cars that were fun to drive. His conception of a fun car was a sporty looking vehicle of intriguing design, whose performance was sparkling, and which could be sold at a profit for $1,000. The Tucker Carioca was to be sold in kit form.

Please get in touch with us at mail@kustomrama.com if you have additional information or photos to share about Preston Tucker.