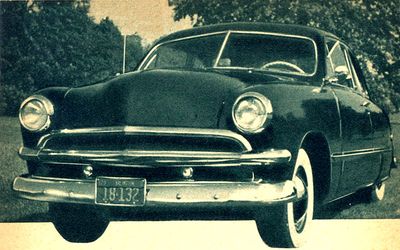 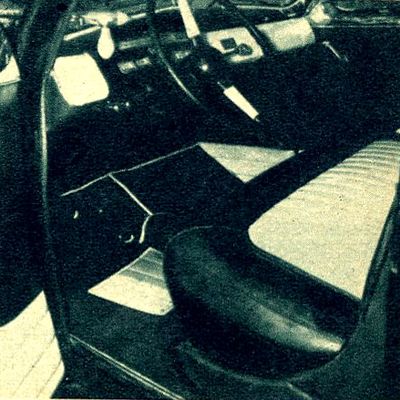 1949 Ford Club Coupe owned by police-officer William C. Jeunette of Arlington County, Virginia. Policemen can be the strangest people. They're supposed to be mean, we hear, and they don't want anyone to have a good time, we are told. That isn't always true! Cops can be pretty good guys if they want to. Officer Jeunette was a typical law-enforcement agent who appreciated the finer things of life in the automotive sense of the phrase. He said, "As a member of the Arlington County Police Department, Arlington, Virginia, I have found that most honest-to-goodness-hot-rodders are really a swell bunch of guys who can depend on the backing of the Arlington Police Department 100%".[1]

William's Ford featured custom bodywork, upholstery and engine. The stock hood was swapped in favor of a 1951 Ford unit. The top bar of the grille originated from a 1951 Ford as well. A straight grille bar was installed to achieve a smoother look. The car was nosed and decked, and fit with fenderskirts. A Chevrolet license plate guard was fit to the rear bumper. To get the right stance, it was dropped 2" in the rear. Whitewalls and chrome moon-discs wrapped up the style. The interior was done in black and white Naugahyde. Black and white carpets extended the color scheme down to the car's floor. The most extensive modification on the car nestled under the hood. A 1952 Ford mill was installed to increase the car's performance. The engine was bored to 3 3/8" and stroked to 4 1/8", giving a displacement of 296 cubic inches. Offenhauser heads, Edelbrock dual manifold, and an Iskenderian cam all do their part toward dragging that last horse out of the stable. A Mallory ignition furnished the spark.[1]

Policemen are just about as inevitable as death and taxes, but if the were all like William Jeunette, car enthusiasts would find the world a better place to live in.[1]

Please get in touch with us at mail@kustomrama.com if you have additional information or photos to share about William C. Jeunette's 1949 Ford.