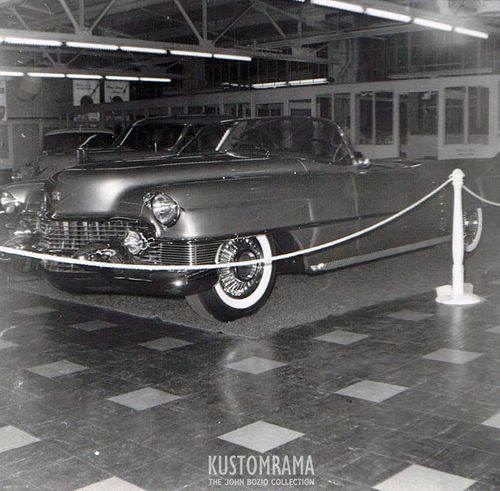 A photo of the 1953 Cadillac Le Mans concept car taken at a Hartford, Connecticut Cadillac dealership in 1953. The neat two seater was built by GM under the regime of Harley Earl. John, who was 17 years old at the time, hunting chicks with his customized 1949 Buick Super convertible, was really impressed with the Le Mans. Four Le Mans convertibles were built, and one of these ended up with shoe magnate Harry Karl. Harry had Barris Kustoms restyle it for him. Unfortunately, the Barris Kustoms restyled Le Mans was destroyed in a fire in 1985. The fourth Cadillac Le Mans went missing on November 8, 1953, and has not been seen since then. Several investigators and enthusiasts have tried to locate the missing Le Mans without luck. We asked John, and he claimed he had nothing to do with the disappearance of it! Photo by John Bozio. 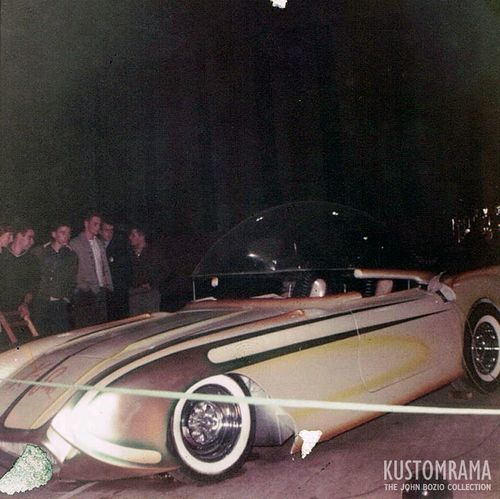 A photo of Ron Aguirre's 1956 Chevrolet Corvette, the X-Sonic, taken at Frank Maratta's first National Rod & Custom Show in Hartford, Connecticut in October of 1961. This version of the car featured a scallop paint job by Larry Watson of Watson's House of Style. Photo by John Bozio. 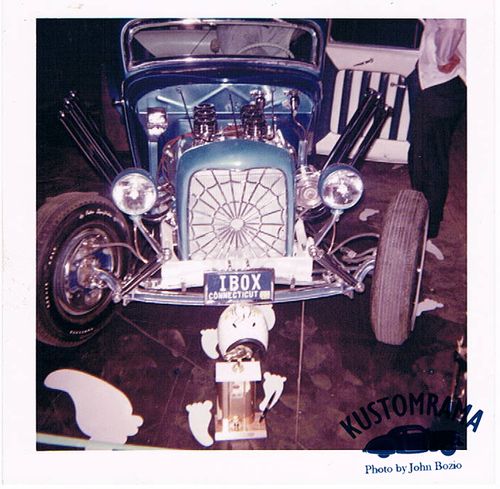 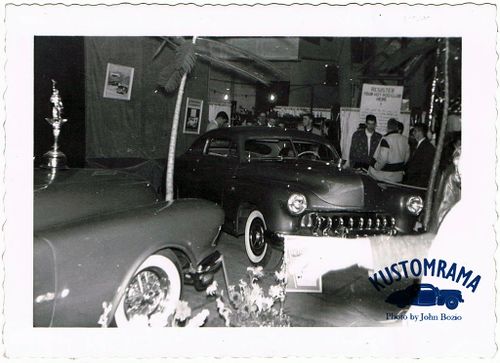 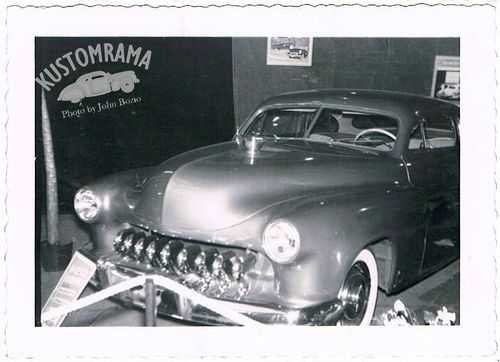 Another photo of George Remington's 1949 Mercury from the 1956 Hartford Autorama. Bozio and Maratta were friends, and John used to hang out at Frank's Body Shop when he was building the Mystery Merc. Frank did also have a speed shop, and that was were John bought most of the speed parts for his blown Hemi powered 1940 Ford. George's Mercury is still around, currently owned by pinstriper Anthony White. Photo by John Bozio. 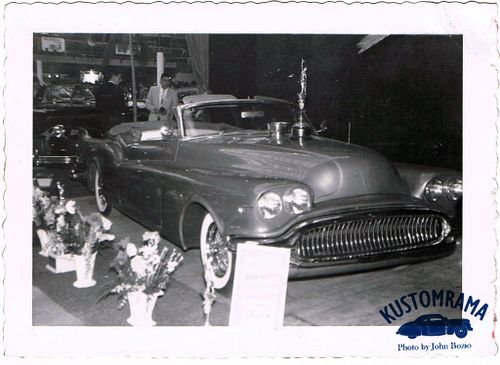 The 1953 Buick Skylark convertible that Maratta displayed at the 1956 Hartford Autorama was restyled for a Doctor that Bozio can’t remember the name of. The Doctor worked at the Hartford Hospital, that was just down the street from Frank’s shop. The build was started in 1955, and completed in time for the 1956 Hartford Autorama in February. The build was not completed when the souvenir program for the show was made, so that contained under construction shots of the car. What is interesting about this custom is that it has quad headlights, or as the souvenir program described it “dual-twin headlights”! The first production cars in the US to have quad headlights could be seen on the streets late in 1956 as 1957 models. Titled “New Customizing Ideas”, the cover of Motor Trend June 1956 contains a quad headlighted 1954 Ford F-100 truck belonging to Martin and Morris Srabian. Known as the Wild Kat, the iconic truck was restyled by Barris Kustoms. Barris have for a long time been credited as the originators of the quad headlight styling with this truck. Andy Southard photographed the Wild Kat at the 1956 Monterey Kar Kapades in March of 1956. By then the scallops had been pinstriped. The photos that appeared on the cover of Motor Trend June 1956 shows it prior to the pinstriping, so those photos were at least taken before March of 1956. John Bozio believes that Frank finished the Skylark late in 1955, so it might happen that Frank was ahead of the famous Barris Brothers! According to the book “Barris Kustoms of the 1950s”, “the Wild Kat was the first vehicle ever to feature quad headlight styling, beating Detroit by two years.” Well, at least their production cars. In 1954 Cadillac debuted two concept cars named the “La Espada” and the “El Camino” at the GM Motorama. Both these featured dual headlights controlled with an Autronic Eye. Photo by John Bozio. 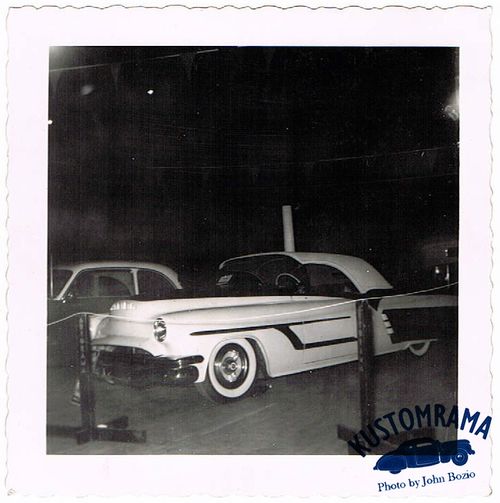 Bruno and Reino Maki's 1953 Oldsmobile convertible at an indoor car show. The car, also known as The Maki Special, was restyled by Bruno and Reino, two brothers from Fitchburg, Massachusetts. The boys' father, a master craftsman in the art of body building, brought his knowledge of metal shaping to the US from Finland, where he was born. John believes he took this photo at a local car show in 1954, but it could also have been taken at the 1956 Hartford Autorama. Photo by John Bozio. 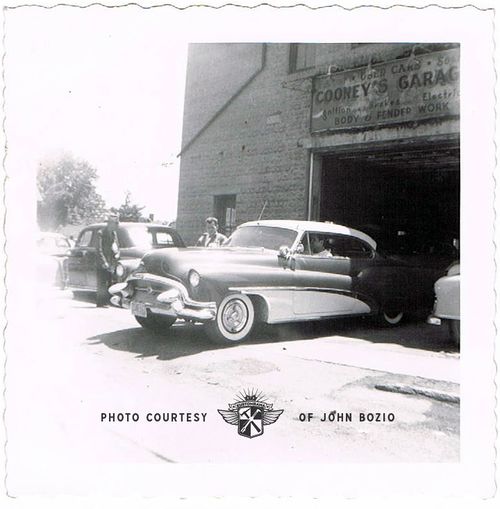 An early photo of John Bozio's 1953 Buick Roadmaster taken in 1957, outside Cooney's Garage. This photo was taken the Sunday morning the Buick was completed, and John was driving it out of the garage to go driving around town and show it off. Don Cooney is standing next to the Buick in the photo. Photo courtesy of John Bozio.

John Bozio is an East Coast customizer from East Hartford, Connecticut. John bought his first car, a 1939 Buick Century, at age 15 in 1951. The Buick was John's first custom attempt, and it was restyled, featuring a late model Buick grille, a set of 1948 - 1952 Cadillac sombreros, a single spotlight, fenderskirts, a 1951 Mercury dashboard, leopard upholstery a dual carb manifold from a 1941 Buick and more. Two years later, at age 17, John bought his second car, a 1949 Buick Convertible. Being a customizer at heart, John restyled his second Buick as well. John worked out of Cooney's Garage, and he learned the skills of auto repair and body work by hanging out at Don Cooney's shop from the age of 12. At age 14 John entered trade school, to become a machinist.[1]

John bought his third car, a 1953 Buick Roadmaster, in 1955. The Buick was restyled between 1956 and 1957, and it gained national recognition when it was featured in the first issue of Custom Illustrated in 1958. John retired in 1997, and moved from Connecticut to South Carolina to get away from the cold, snow and ice. John has scanned and shared his photos with Kustomrama, so on this page we will regularly add photos from John's collection.[1]

Please get in touch with us at mail@kustomrama.com if you have additional information or photos to share about The John Bozio Photo Collection.