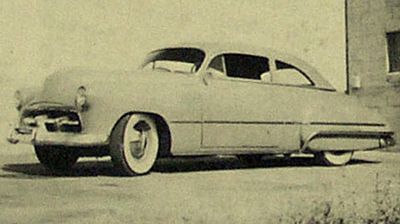 Spencer's Chevy as it looked when it was painted yellow with a purple top.

Spence's Chevrolet as it sat after it had been repainted and featured in Trend Book 105 Restyle Your Car in 1952. Photo by Al Paloczy 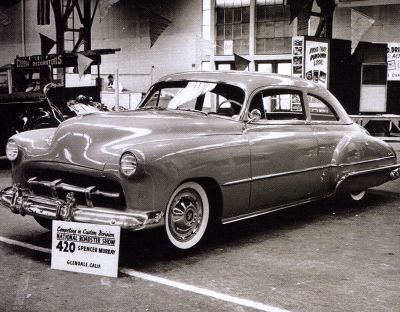 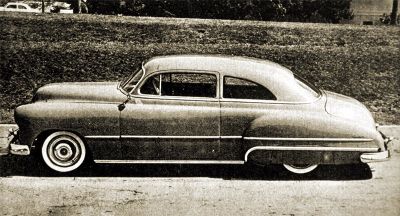 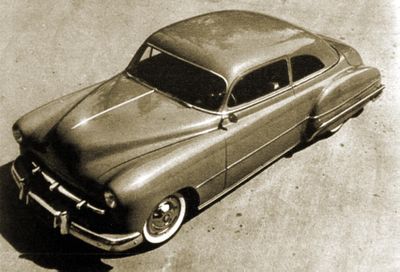 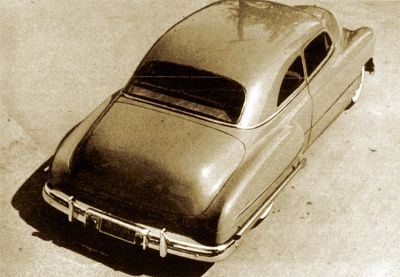 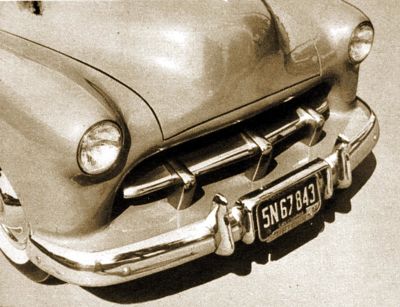 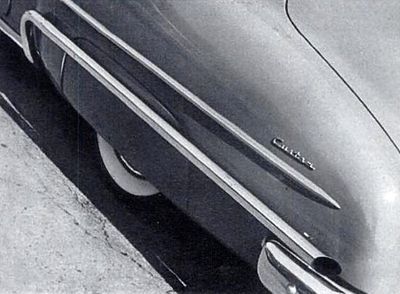 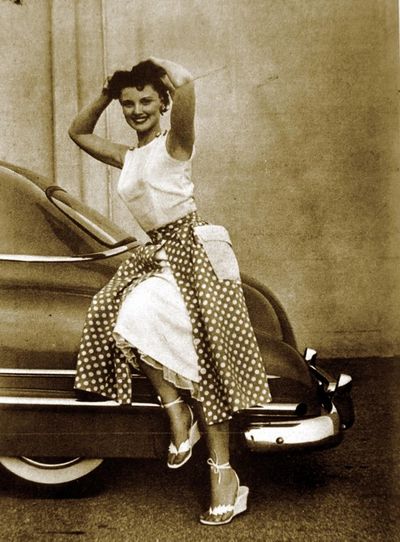 1949 Chevrolet restyled by Link Paola at Link's Custom Shop for Spencer Murray of Glendale, California. In 1948, when the brand new 1949 Chevrolet was released, Spence decided to sell his 1946 Chevrolet in favor for a brand new 1949 Chevrolet fastback Deluxe. At the time Spence worked for Link Paola at Link's Custom Shop. The 1949 Chevrolets were fast sellers, and within a couple of months they began to show up at Link's shop for fender and repair stuff. Link had a friend at an insurance company who arranged for Link to buy at auction Chevys that had been totalled. The theory was to buy totals for a couple of hundred dollars, rebuild the car and re-sell it for an easy profit. At the shop they got it so they could strip down any bodystyle 1949 Chevrolet and rebuild it within a couple of hours. One day a customer came in and was in a hurry to buy a rebuilt 1949 Chevrolet. Link did not have a car ready to sell, but he had just gotten a wreck in that a truck had fallen on. The body was squashed flat but the frontend sheetmetal and chassis were OK. So Link came up with an idea. Take the flattened body off the wreck and replace it with the body Spencer's nearly-new fastback. That way the customer could have the car in a couple of days. Link also promised Spence that he would come up with a replacement body when one became available, and that he would customize it for free. Link came to Spence with a 2-door sedan bodyshell, and Spence had a heck of a time getting him to chop it. After Link finally came around to chop the top 3 inches in September 1950, Spence convinced one of the other guys at Link's chop to help him with the rest of the customizing. Neither of them were bodymen, and the work was performed after hours and on Sundays.[3] According to Hop Up June 1952 the body was channeled 2 inches over the frame, but Spence can confirm that this was not the case as the car was not channeled at all. But the car was lowered, making the overall height of the car 4 feet 10 inches. The hood and deck lid were shaved. The door handles were removed, and replaced by electric push-buttons. According to Hop Up June 1952 the deck lid on the Chevy was raised and lowered by an electric motor, this was not true either.[4] The headlights were frenched, and the stock grille was replaced by a floating Plymouth grille bar inside a molded Mercury grille opening.[5] The stock windshield was replaced by a one piece glass, probably from an Oldsmobile. The taillights were relocated to the bumper guards, and the car was fit with an unique external dual exhaust.[5] The outside tail pipes extended from the body at the rear of the rocker panel molding, they curved upward and to the rear ending at a point directly over the rear bumper. Spence's Chevy was initially painted yellow with a purple top. The dark color above the light one, had an opposite effect on the top chop and made the top look high and the body thin, so Spence repainted the car.

The engine was bored and ported. The head milled, and large valves with heavier valve springs were installed. Quick steering was achieved by shortening the stroke of the tie-rod idler-arm. This reduced the turning of the steering wheel from four and one-half turns to two and one-helf turns, lock to lock.[4]

In 1952 Spencer entered his Chevy at the 3rd National Roadster Show in Oakland, where it took 2nd place behind Joe Bailon's 1941 Chevrolet Coupe, Miss Elegance.[1]Third place at the show was taken by a one of the Barris cars that were entered at the show. According to Spence, George Barris never forgot that Spence beat him at the show.[3] Dean Batchelor of Hop Up Magazine saw Spencer's Chevy at the show, and had Ralph Poole photograph it for Hop Up June 1952. After attending the Oakland Roadster Show Spencer entered his Chevy at the 1952 Indianapolis Custom Auto Show that ran during the week before the 500-mile race. Dean Batchelor thought the long trip in a taildragging custom would make a cool story, so he sent Ralph with Spence to take photos along the way. The result was published in Hop Up September 1952 under the title "6000 miles in a Custom". Dean had Spence write the story, and it inspired him to ask Spence if he would consider leaving Link's Custom Shop to work at Hop Up.[6] Spencer later sold the car, but can't remember who bough it or the circumstances.[3]

Please get in touch with us at mail@kustomrama.com if you have additional information or photos to share about Spencer Murray's 1949 Chevrolet.