From Kustomrama
(Redirected from Spence Murray)
Jump to: navigation, search 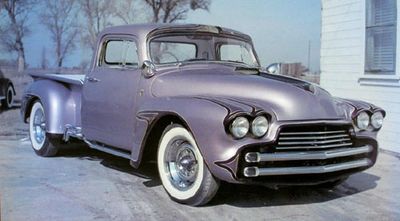 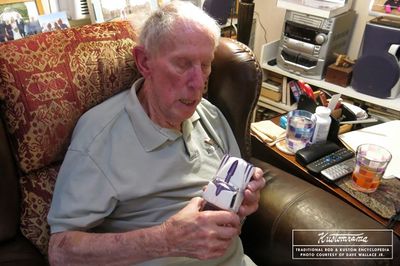 Dave Wallace Jr. stopped by Spence in May of 2019 to interview and photograph him for a story. Spence and Carolyn were still living at home, but after a major stroke, Spence had a hard time getting around the house alone. His mind was full strength, Dave assured Sondre Kvipt of Kustomrama. This photo shows Spencer with one of the limited edition diecast Dream Trucks that were made. Photo by Dave Wallace Jr. 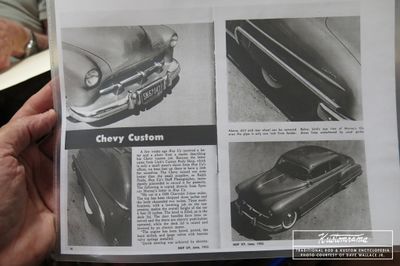 Spence showing Dave the featured story on his 1949 Chevrolet from Hop Up June 1952. Photo by Dave Wallace Jr. 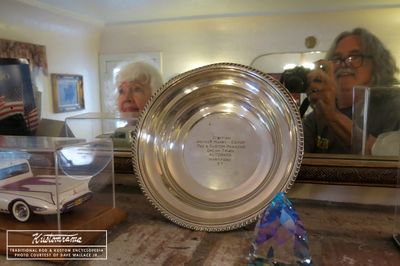 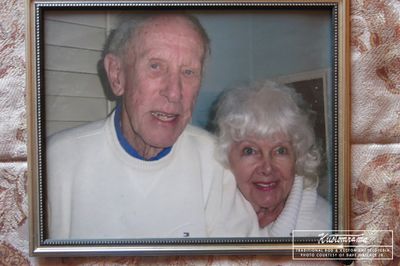 Spence and Carolyn met while they were both working for Petersen. Photo by Dave Wallace Jr. 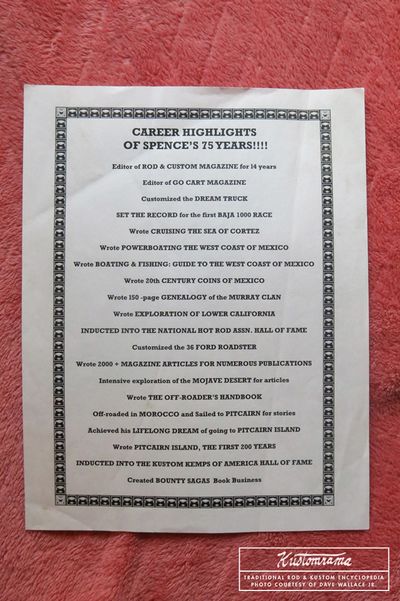 Spencer "Spence" Murray (01.05.1927) was the first editor of Rod & Custom Magazine. He had always been into customs, and bought his first car, a 1941 Ford Convertible in 1943. Later the same year he sold the mildly customized Ford and bought a 1941 Chevrolet Convertible that he had Link Paola restyle slightly. The work was done just before Spence was drafted to the U.S. Navy. After becoming a civilian, Spence sold the 1941 Chevrolet and bought a 1946 Chevrolet that he also had Link Paola customize.[1]

In early 1948 Spence went to work for Link Paola at Link's Custom Shop after hours. At the shop Spence sanded cars and drove the tow truck. When the new 1949 Chevrolet was released Spence decided to sell his mildly customized 1946 Chevrolet in favor for a 1949 Chevrolet fastback DeLuxe. After swapping the body for a 2 door sedan with Link, the guys at Link's Custom Shop customized the car for Spence as a favor. After customizing the Chevy, Spence entered it at the 3rd annual Oakland Roadster Show in 1952. At the show Spencer's car took 2nd place behind Joe Bailon's 1941 Chevrolet Coupe, Miss Elegance.[2] Dean Batchelor of Hop Up Magazine saw Spencer's Chevy at the show, and had Ralph Poole photograph it for Hop Up June 1952. After attending the Oakland Roadster Show Spencer entered his Chevy at the 1952 Indianapolis Custom Auto Show that ran the week before the 500-mile race. Dean Batchelor thought the long trip in a taildragging custom would make a cool story, so he sent Ralph with Spence to take photos along the way. The result was published in Hop Up September 1952 under the title "6000 miles in a Custom". Dean had Spence write the story, and it inspired him to ask Spence if he would consider leaving Link's Custom Shop to work at Hop Up. It was an easy decision for Spence, and he started to work for Hop Up on his 26th birthday January 5th, 1953. Spence was listed as Hop Up's Associate Editor in the April 1953 issue, and his job was to write photo captions, and help the secretary Mabel typing labels for subscriber copies. At Hop Up Spence was paid $35.00 a week. Work started at 8:30, and went on to 5:00. Lunch was 30 minutes from exactly noon.[3] Due to its small size, the circulation and ad revenue of Hop Up was limited. Growth was needed, and Hop Up became a full-size magazine by March 1953. The new size did not become a hit with dedicated readers who demanded the staff to bring back the little Hop Up. Since it was physically impossible to resurrect the small size, the guys at Quinn Publications decided to give born to a brand new pint-sized magazine named Rods and Customs. Rods and Customs made its debut May 1953, and In order to avoid hiring new people, Bill Quinn assigned the new magazine to Spencer without lessening his Hop Up duties. [4]

Spencer eventually sold the Chevy, but can't remember who bought it or the circumstances for selling it. His next car was a 1954 Chevrolet hardtop that he had Von Dutch stripe. Spence and his wife shared the Chevy for a while, but when he went to work at Hop Up Magazine they needed another set of wheels, so Spence bought the 1950 Chevrolet Pickup that was eventually turned in to the The Rod & Custom Magazine’s Dream Truck.[1]

In 1955 Robert E. Petersen bought Quinn Publications, and Spence and the rest of the Hop Up staff moved into Petersen's office at 5959 Hollywood Blvd. Spencer stayed with Rod & Custom until 1959. After the April 1959 issue, Spencer took a hiatus, but returned once more as editor after Rod & Custom became full-sized in August 1961.[3]

After 28 on and off years at Petersen Publishing, Spence worked for Road & Track twice for a total of 7 years. He worked for Argus Publishers Corporation in between, as well as freelancing back to Petersen from Hawaii for a year. Today Spence is semi-retired, but contributes regularly to - and work exclusively for - The Rodders Journal.

Dave Wallace Jr. stopped by Spencer in May of 2019 to interview and photograph him for a story. Spencer and Carolyn were still living at home, but after a major stroke, Spencer had a hard time getting around the house alone. His mind was full strength, Dave assured Sondre Kvipt of Kustomrama.

Please get in touch with us at mail@kustomrama.com if you have additional information or photos to share about Spencer Murray.