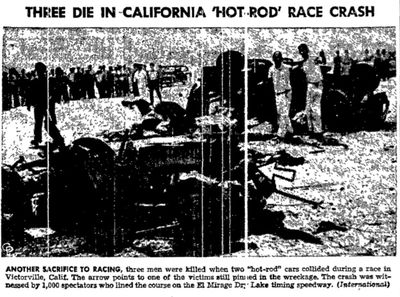 A newspaper clipping about the fatal crash from the "Daily Courier, Friday, May 27, 1949".

Sunday, May 22, 1949 Rulon entered his roadster at a Bell Timing Association sanctioned race at El Mirage. Rulon was 21 years old at the time, and he ran in the "C" lakester class with the old roadster. At the time, Rulon's roadster was powered by a 276-cid 1942 Mercury flathead engine.The engine was hopped up sporting Evans heads, an Edelbrock manifold, a Clay Smith cam and Potvin ignition. After finishing a run, McGregor was returning to the starting area. He crashed into the side of a 1940 Ford coupe patrol car driven by Gents member Robert Fadave. Fadave had made three runs already, but was not on the race course. He had picked up Jackson Pendleton and John Cuthbert and was driving around. Fadave fails to see Rulon as he is speeding towards the starting line, he decides to take a fatal short cut, angling right across the race course. Rulon's accelerating roadster T-bones the coupe squarely in the driver side, the roadster bounced off into the air and rolled over. Both cars were traveling between 60 and 90 MPH at the time of the collision. The coupe flipped over, rolled and slide a few feet before it came to rest. Nearly all panels on the coupe were smashed up in the accident. Rulon and Jackson were killed instantly and Robert died while being transported in an ambulance to San Bernardino County Hospital. John had serious injuries, but survived the crash.[2] Right after the accident a few spectators pulled out their cameras and took some pictures. Bell Timing Association officials and others tried to wrest the cameras away and destroy the films. Hot Rod Magazine intentionally downplayed deadly lakes racing accidents since it was felt that unfavorable publicity could result in a stoppage of racing. One of the spectators witnessing the accident was Lynn Yakel. Lynn was driving onto the lakes with Frank Leonard and Connie Weidell in a 1936 Ford coupe. Lynn remembers seeing the coupe cutting across the course, they all noticed it, and he remembers that someone said "What's that asshole doing?" Yakel recalls people who were trying to take pictures had their cameras smashed. He also remembers that after a few hours they resumed racing at the lake.[1]

Please get in touch with us at mail@kustomrama.com if you have additional information or photos to share about Rulon McGregor's Lakester.