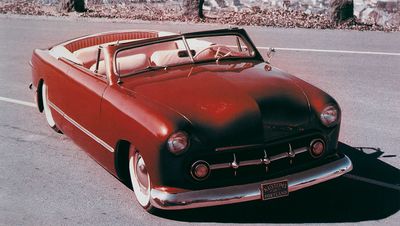 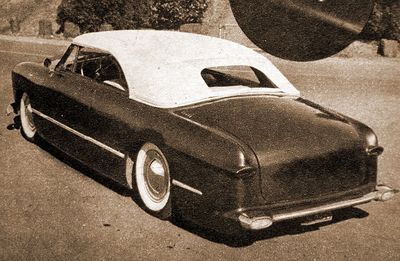 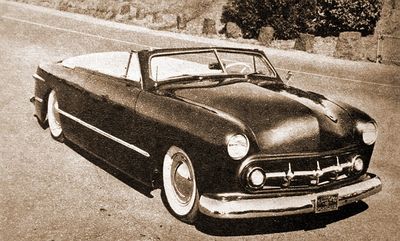 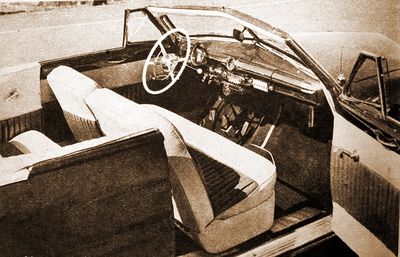 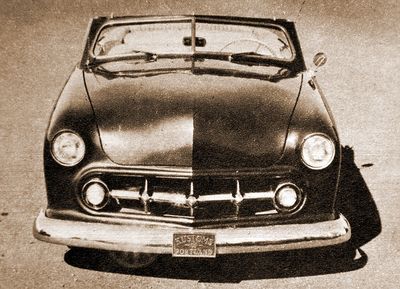 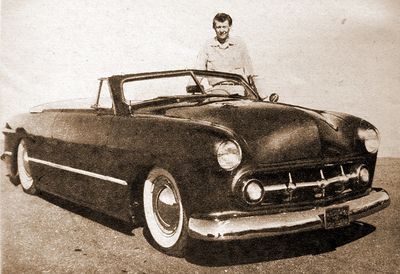 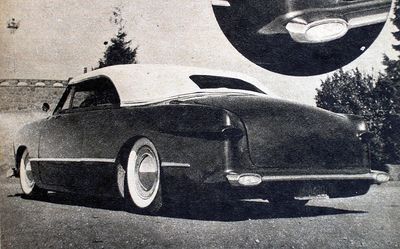 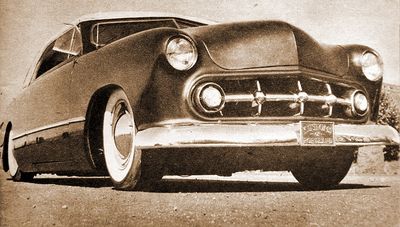 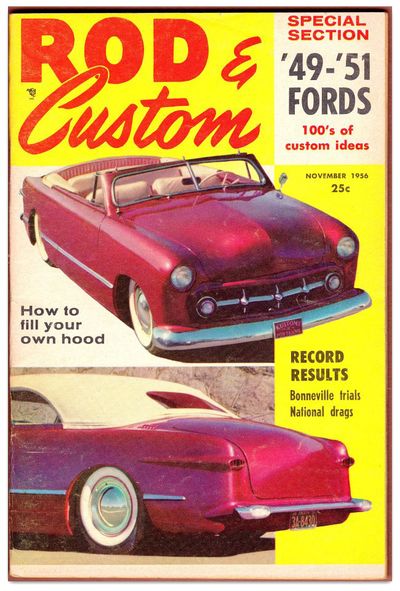 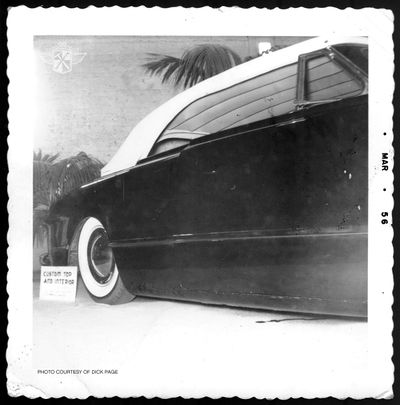 This photo from the Dick Page collection dated March 1956 shows Roger's custom at a 1956 car show in Tacoma, Washington. 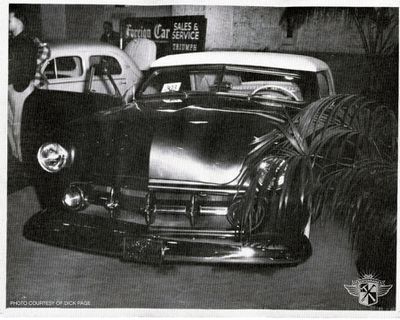 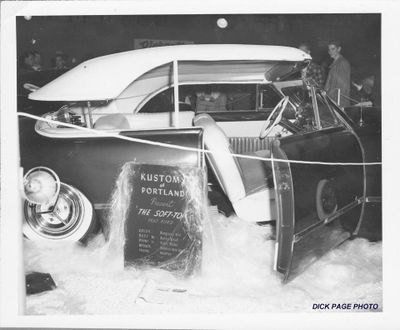 Don Telen's Ford at the 1957 Portland Roadster Show. Don showed the car under the name "The Soft Top". Photo courtesy of Dick Page.

1950 Ford Convertible restyled by Bob Mead of Forest Grove, Oregon for Kustoms of Portland member Roger Cunningham of Portland, Oregon. Roger wanted a low, long and different car to drive around in. Roger had owned several other customs before and decided wisely what car to purchase for his next project. He weighed the pros and cons of rebuilding carefully and ended up with a clean, stock 1950 Ford Convertible. As soon as Roger acquired the car, he turned it over to his buddy Bob Mead in order to have it restyled. Bob began a series of modifications which, over a period of two and a half years, transformed the stocker into a beautiful custom car. Bob started by lowering the car. The front spindles were reversed and a small section of the front coils were removed in order to give it a total drop of 8 inches. Nearly normal spring travel was retained. The rear of the frame was stepped enough to give an 8 inch drop with medium sized lowering blocks. The car was low, but maintained very good riding qualities. The mud guards and valances were reworked to allow full clearance at all points of wheel travel. The rear wheel openings were given a full radius to complete the lowering job. Up front, the headlights were frenched by using a combination of 1950 Chevrolet and 1952 Ford rings. The taillights were frenched and recessed 3 inches. The hood was filled, peaked and rounded. The deck lid was also shaved and the door handles were removed. Roger wanted to have a 1953 Chevrolet grille, and he did not want to use the stock Ford grille shell. Bob solved the problem by forming a new grille shell from exhaust tubing. The front bumper was retained but it was filled and re-chromed. The rear bumper was removed and a roll pan installed which was molded around a 1955 Chrysler back-up light bar. The bar matched the shape of the taillights and was just the right length.[2]

The next step was the interior. Roger stripped out the stock upholstery and had the windshield chopped 4-1/2 inches. The car was then turned over to Lee Hetzler of Hollywood Auto Upholstery for a full treatment. A padded top was chosen and while Lee built the tube frame for the top, he sent out the window frames for a chop to make them match the windshield. The top was made in one piece and padded. After that, the seats were redone in pink and burgundy pleats rolled over foam rubber. Door panels and carpets were done in the same color combination. Since the well for the convertible top would no longer be used, Lee built an upholstered shelf to cover the space. This also made it possibly to drop the rear windows out of sight when the back of the top was left open.[2]

As a final and third step, the body was painted with a dozen coats of "Frozen Orchid" lacquer. All complete even to the door pulls, the car ended up exactly as Roger wanted; a comfortable, yet entirely different car that attracted a lot of attention.[2]

Later on the Ford was owned by Kustoms of Portland member Don Telen. Telen called the car "The Soft Top".[3] Don showed the car at the 1957 Portland Roadster Show. At the show, it came third in the Full Custom Convertible class.[4]

Please get in touch with us at mail@kustomrama.com if you have additional information or photos to share about Roger Cunningham's 1950 Ford.