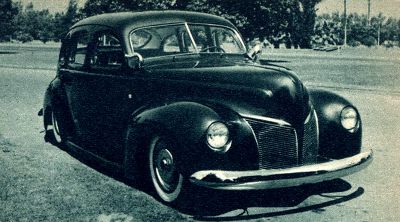 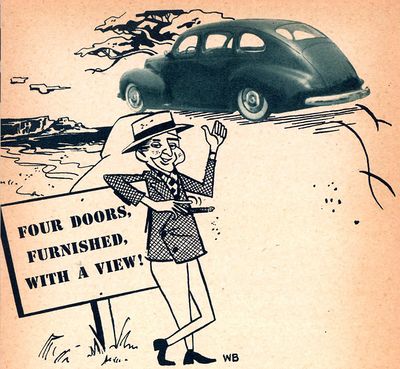 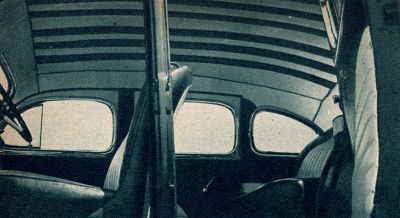 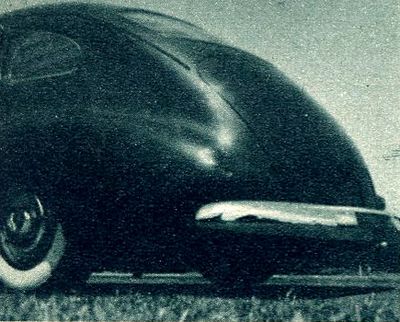 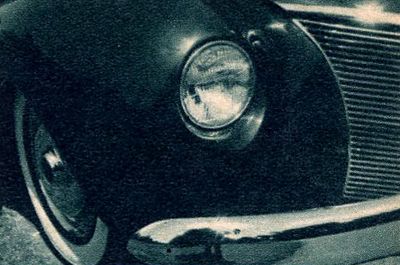 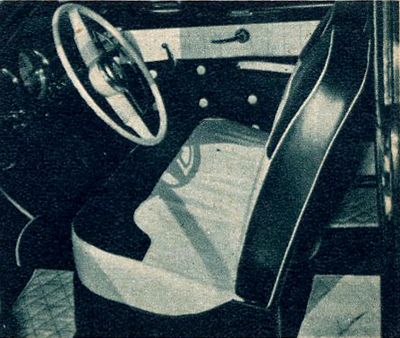 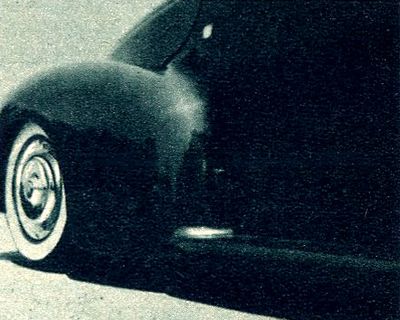 1940 Mercury 4-door sedan restyled by Gordon's Custom Shop for Real estate agent Mel Lehman of Fresno, California. The car took four months and almost $3000 to complete. Four-door sedans are not traditional customizing material, apparently for the reason that they are awkward to chop. However, there is no reason why a four door can't be just as sharp as another body style. With the current emphasis being places on square feet of glass area by the stock car manufacturers in Detroit, it seemed kind of mid-Victorian for Mel to cut this area down while all the new cars were building it up! The windshield would require raising the top to increase the glass area! That would be unthinkable to do, but the back window particular on these models was never famous for its rearward visibility anyway. A 1950 Ford rear glass was installed to achieve a sweeping view. The stock Merc headlight rims were reversed and inverted to fit, then welded to the underside of the fenders, making a tunnel-like effect. 1948 Chevrolet bumpers were acquired and shaved for guards and bolts. The rear bumper featured a cut out for the license plate. The achieve a smoother look, the car was nosed and decked, and the door handles shaved. Small crests on the cowl panel contained push-buttons for the doors. The rear fenders were molded to the body, and custom taillights were built. The front fenders were frenched into the running boards and body. To smooth out the running boards required filling 362 holes![1]

The big sedan might look slow, but a hopped up 59AB block provided power for the car. The engine was ported and relieved, and bored and stroked an eight of an inch each. The new engine was fully balanced and assembled, using Navarro heads of 9:25 to 1 ratio combined with an Edelbrock triple manifold. A Harman & Collins cam gave the valves boost they needed to get the wheels rapid in motion. Mel succeeded where others have failed in the never ending quest for individuality in modes of transportation. The interior was all refurbished, and the pleated and rolled leather upholstery contrasted nicely with the chrome plated window reveals.[1]

Please get in touch with us at mail@kustomrama.com if you have additional information or photos to share about Mel Lehman's 1940 Mercury.