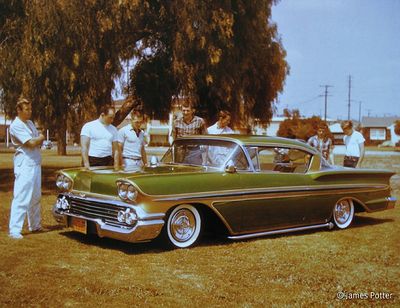 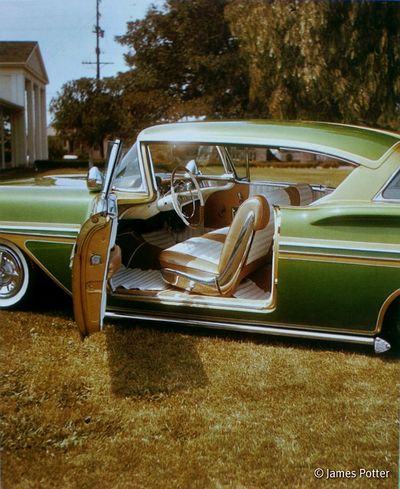 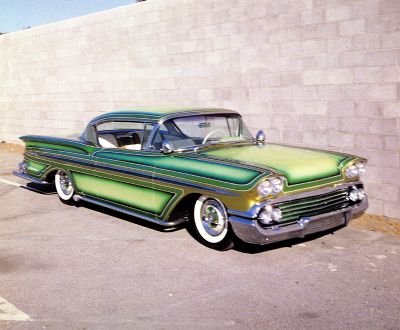 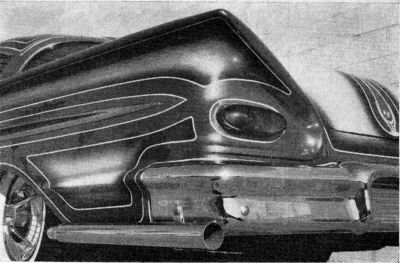 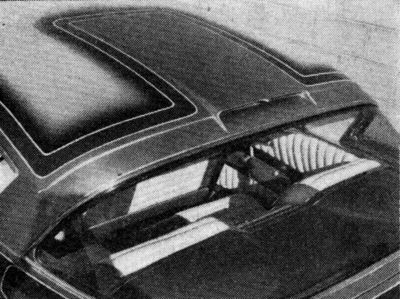 1958 Chevrolet Impala restyled by Walkers Body Shop for Jim Doss of Bakersfield, California. The car was nosed, decked and shaved for door handles. The trim was discarded except for the main chrome spears for the side trim, which they reversed. The taillights were swapped in favor of a pair of Pontiac units which were frenched. The original Impala roof scoop was reworked with a center peak. The stock grille was kept, but it was color-trimmed green. The unique exhaust treatment featured a full length lakes pipes that were routed back inside the wheel wells and re-emerged as Bellflower tailpipes behind the rear wheels. Kolor-trimmed Dodge Lancer hubcaps and dual spotlights were added. The Impala were slammed to the ground by cutting the coils and installing lowering blocks. Once the crew at Walker's was finished with the bodywork, it was sent to Watson's House of Style to have it panel paint. The first time Larry Watson painted it lime green and green, later he would paint it lime green with a multitude of colors consisting of transculent green, gold and pearl frost for paneling. The panel paint was highlighted with white stripes.[1] The interior was upholstered gold and white, the gold was matched exactly as the gold scalloping on the body. All garnish moldings were chrome-plated.[2]

Please get in touch with us at mail@kustomrama.com if you have additional information or photos to share about Jim Doss' 1958 Chevrolet.