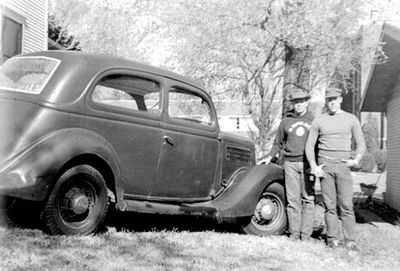 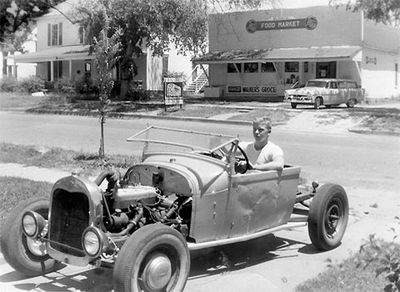 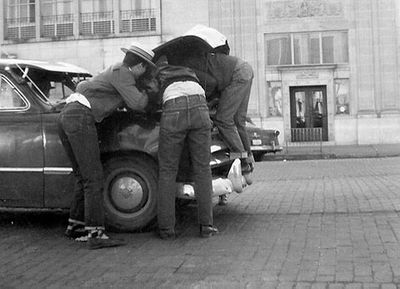 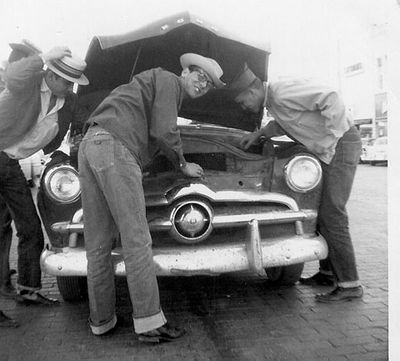 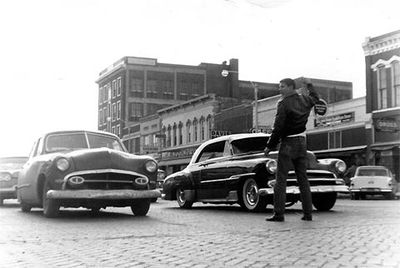 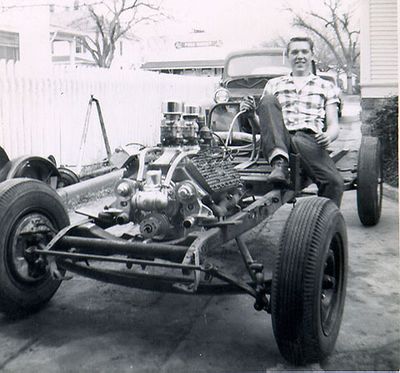 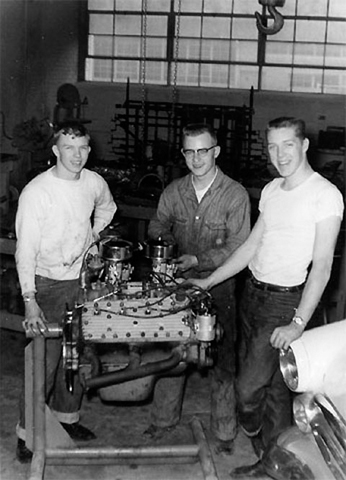 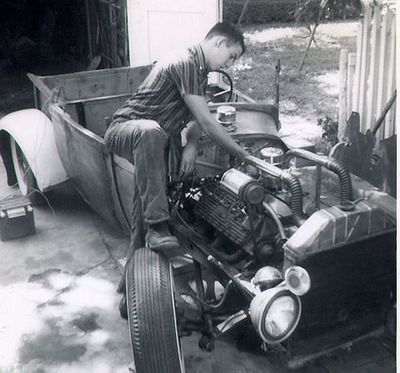 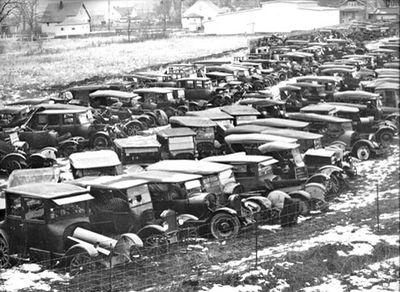 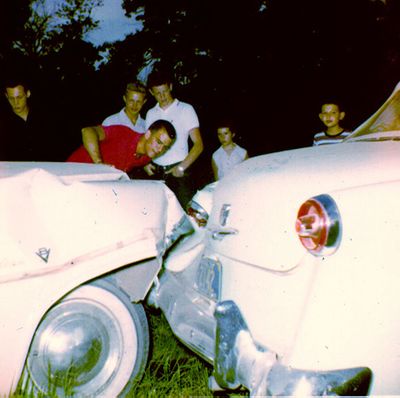 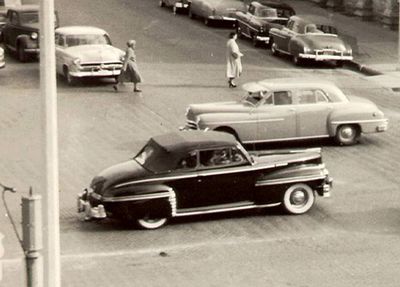 1953 - Mitchell's 1948 Mercury cruising down Ninth and Main in Winfield 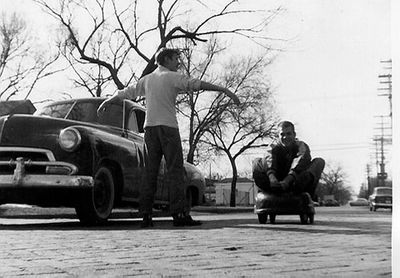 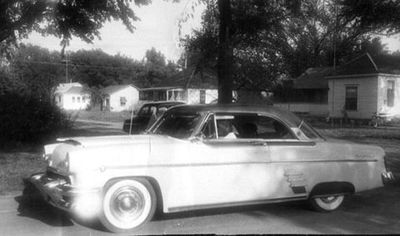 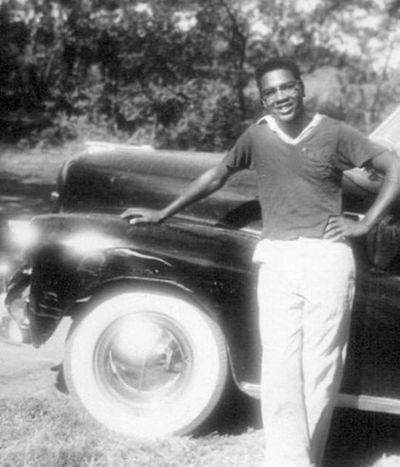 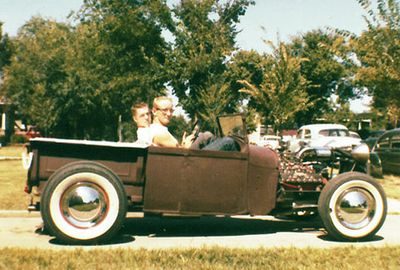 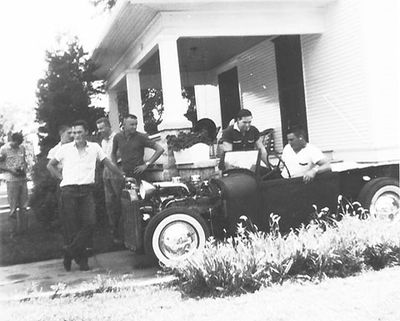 September 1956 - Bill and Jim Bottorff's Model A Roadster Pickup in front of the Bottorff residence. 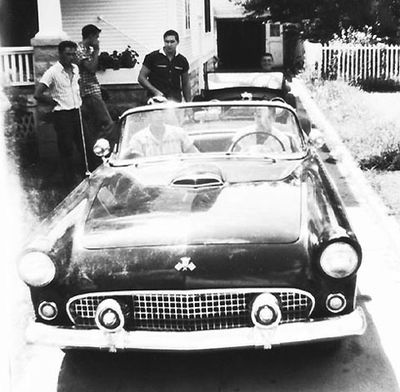 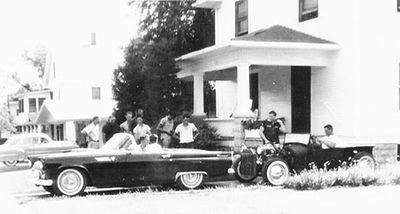 September 1956 - Donnie Jenkins' 1956 Ford Thunderbird, and Bill and Jim Bottorff's Model A Roadster Pickup in front of the Bottorff residence. 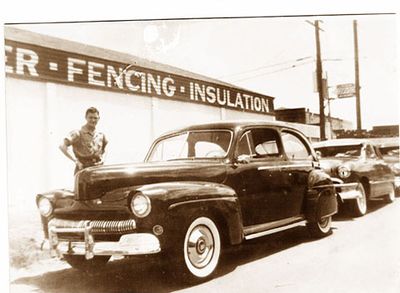 Donnie Jenkin's 1946 Ford This picture was taken in 1955 on Manning St. just north of Ninth Ave. in Winfield. Donnie has just turned 15 and his dad Bus Jenkins has had this car, a 1946 Ford Tudor, customized for him as a birthday present. 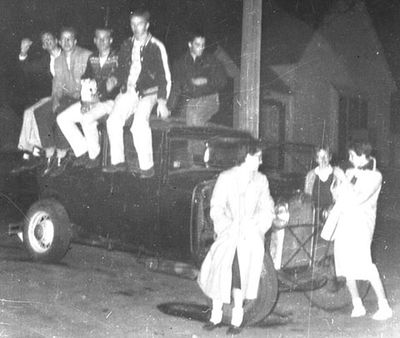 September 1956 - A Ford Model A which was bought for 50 bucks of pooled money. 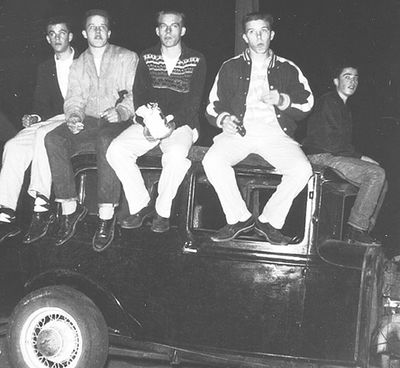 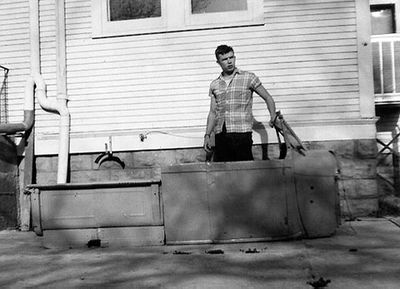 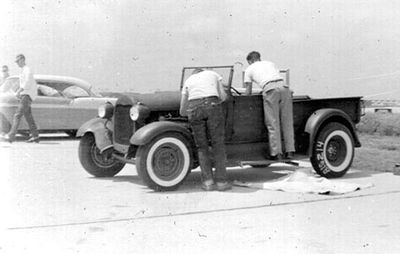 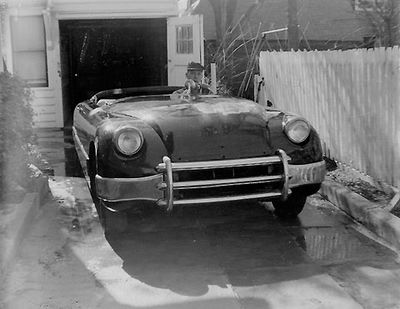 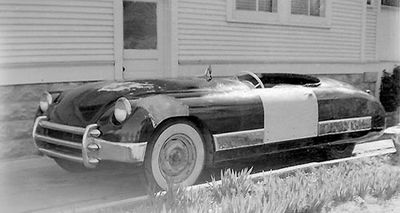 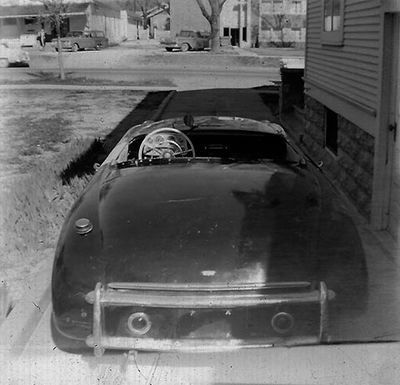 Kustomrama takes you back to the mid fifties, to the town of Winfield. Winfield is a city located in Cowley County, Kansas. We are following Bill Bottorff and his brother Jim Bottorff. Bill has let us use his scrapbook to show you how it was back in his days. On this journey, we will meet Bill, his brother Jim and their friends from the Winfield High Vikings.

According to Bill, Jim equipped this old Ford with a "stock engine", "that was at least what he told the Kansas Sheriff. After having chased Jim for some distance and loosing ground the Sheriff called ahead and had a road block set up. After getting Jim's explanation of what kind of engine was under the hood, the Sheriff demanded that the hood be opened. There it was for all to see, a 1956 Chevrolet 265 Corvette engine. The Sheriff went nuts and Jim reiterated that indeed it was a STOCK Corvette engine just as he said".

Bill Bottorf purchased this 1954 Kurtis Cad in Denever, CO in August of 1960. In November of 1960 Jim and Bill managed to run it off a cliff out side Manhattan, Kansas. Here is Bill's version of the story: "The car is shown in these pictures after most of the damage has been repaired and the car driven from Manhattan to Winfield at Thanksgiving with no windshield, with snow on the ground, in freezing temperatures. Boy was it a cold ride. We borrowed football helmets from K-State (Jim was on the football team) and wore shop googles and made the 160 mile drive. This was a great car, it would go over 120 mph that I know of, and was pretty simple to work on. Of course going a hundred and twenty in a car with a Studebaker front suspension and a wobbly idler arm was a little scary. It had a fiberglass body with aluminum doors, hood and trunk. The cowl in front and behind the driving compartment was cast aluminum. The windshield was held in a frame of chromed cast brass which was crushed when we went off the cliff and landed upside down. By some miracle we both survived uninjured. The car was in surprisingly good condition considering we had flipped over and landed upside down.When we went over I just took the steering wheel and pushed up until I was down by the floor pedals. Jim flopped over to where I had been sitting. After we came to rest, there was only room for Jim to reach down and open the inside door handle on the passenger side and push the door open with both feet. Somehow we got out and climbed up to the road and thumbed a ride back to town. Next day we hired a wrecked to get the car and drag it back to the fraternity house in Manhattan. We had about a week to get it fixed up enough to drive it home to Winfield for Thanksgiving vacation. A funny note: when we stopped in Pleasant Grove for gas and brake fluid (that is why we went off the cliff) I went around the side of the station to the bathroom. When I came back the filling station guys were running around the car like a pit crew at Indy. I jumped in the passengers seat and Jim burned out like we were being chased. I asked what was going on and he said he had told the station guys that we were in a cross country race and had wrecked last night outside of Chicago and were trying to make up time. He sure had those guys jumping!

Since that time I have found out that there were only seven of these cars built. They were made by Frank Kurtis of race car fame. Frank had earlier designed a car for Mad Man Muntz who had built several hundred cars of this style on a longer chassis. The first cars were built with an aluminum body and then more were were built with steel bodies. They were called :"Muntz Jets". After Muntz went broke, Kurtis got some of the assets of the Muntz company to settle the debt. Kurtis built seven fiberglass bodied, two passenger cars before finding out that he couldn't make any more money than Muntz.

We put a plastic boat windshield on the car and traded it for a chopped and channeled '1932 Ford coupe with no engine or trans."

Please get in touch with us at mail@kustomrama.com if you have additional information or photos to share about Jim Bottorff.