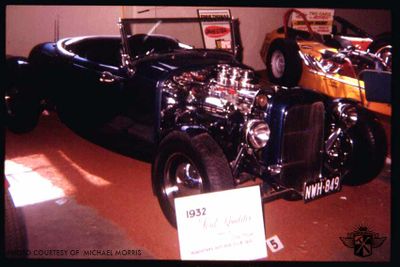 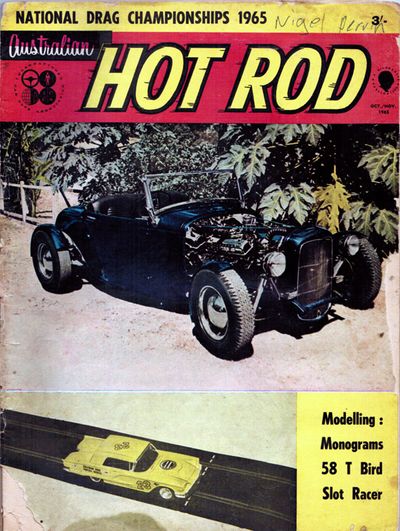 An early version of Gary's roadster as it appeared on the cover of Australian Hot Rod October/November 1965. This photo was taken before Gary installed a nerf bar up front. 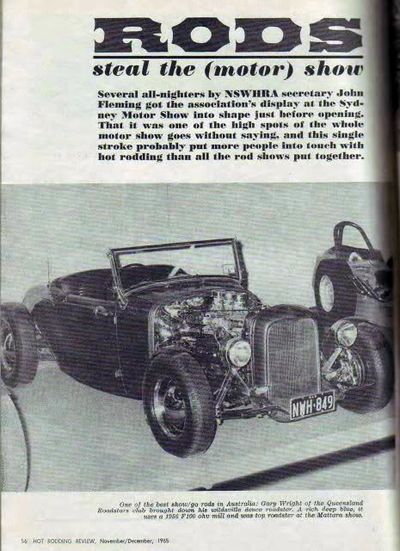 This photo of Gary's roadster from the 1965 Sydney Motor Show was printed in Hot Rodding Review November/December 1965. 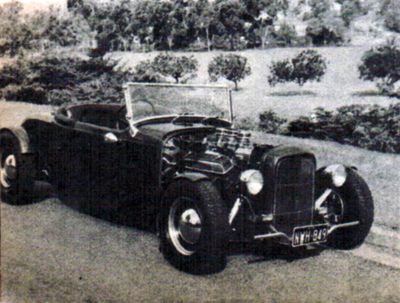 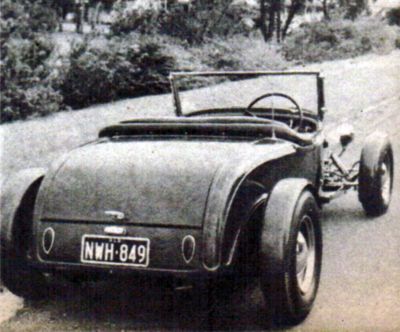 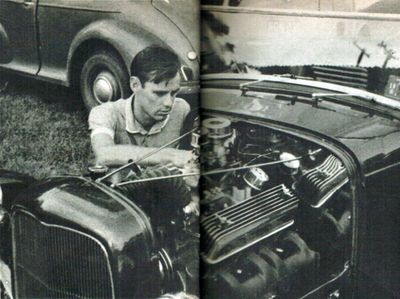 Gary with the roadster. Photo by Terry Vine. 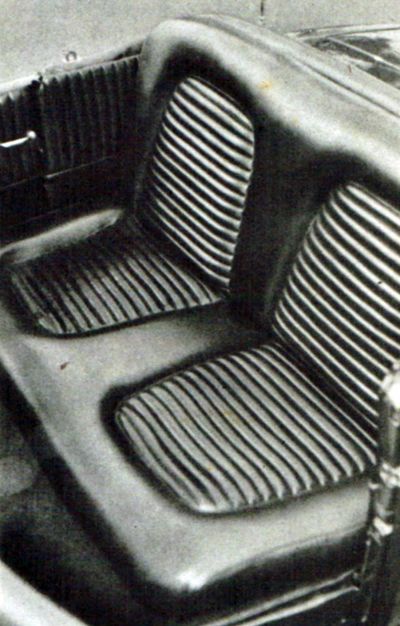 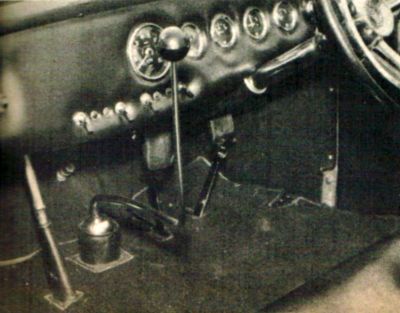 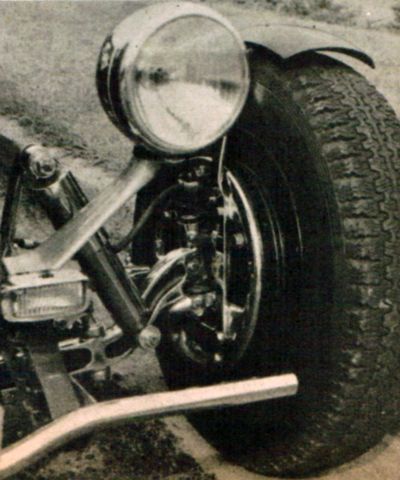 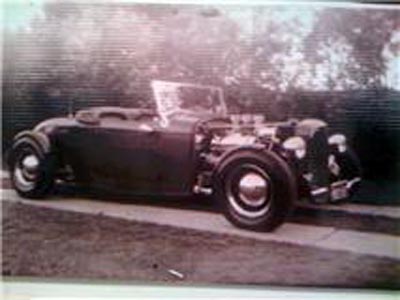 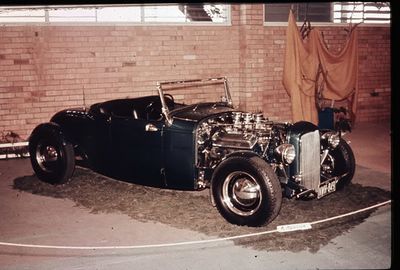 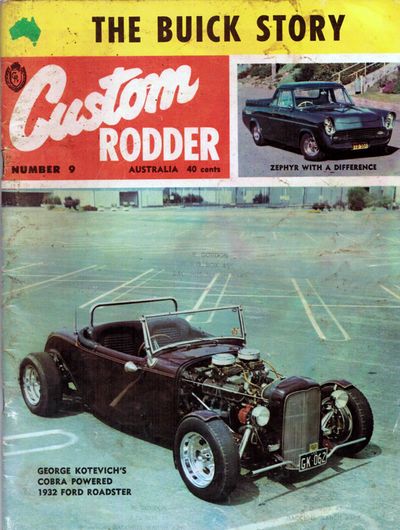 Gary's old roadster on the cover of Custom Rodder Australia Number 9. This photo was taken after George Kotavich had bought it and modified it.

Michael Morris bought the remains of Gary's old roadster in 2003. After buying the car, Michael spent the next 10 years hunting down the correct parts for it in order to put it back to how it was first built in 1963. Photo courtesy of Michael Morris. 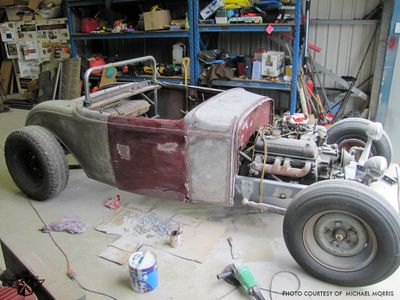 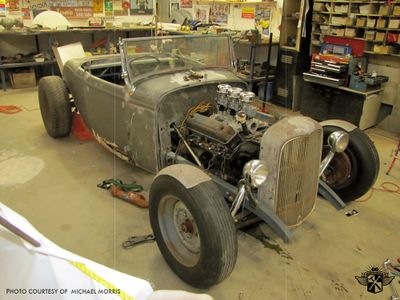 1932 Ford Roadster owned and built by Queensland Roadsters Club member Gary Wright of Australia.[1] Gary got the hot rodding bug from reading books on the sport, and the roadster was his first hot rod building attempt. The build was completed in 1963[2], featuring a deep blue Gulf Stream Blue lacquer by Terry Collier of Brisbane. Before the car was painted, Gary spent eight solid hours of buffing the chassis smooth. Five additional hours were spent buffing the front axle for the chrome platers. The upholstery was done in black deerhide by Kevin Burton Upholstery in Brisbane. The seats were rolled with pleated inserts, and the doors were trimmed to match. Black piping was used for a luxury look, and the carpets featured trimmed edges. Kevin did also pad the dash in the car. The instruments in the padded dash included tachometer, oil, gas, temperature and ammeter gauges. A radio was also built into the dash. The front end was fit with simple, tube-type nerf bars and headlights mounted on custom light brackets. Parking lights were installed on the base of the custom light brackets. Teardrop 1939 Ford taillights were used in the rear, and motorcycle type fenders were installed on all four corners, a very popular adoption in Australia at the time. The wheels were reversed Ford steelies, running Pirelli tires up front and Olympic at rear. The spindles were from a 1948 Ford. Gary's roadster was originally powered by a 1956 Ford F100 272 engine that featured an Edelbrock manifold and three Stromberg 97 carburetors. The compression ratio was 8 to 1. The headers were reversed Ford units with Lukey mufflers. The rockers were Aluminum. The engine was hooked to a 1939 Ford transmission. Twin exhaust pipes peeped out from under the rear panel.

Gary bought the old roadster for $1800 AUD. An additional $2350 AUD were invested in order to get the car into show condition. Once completed, Gary won many awards with the roadster at car shows, such as Best Interior and Top Roadster at the 1965 National in Syndey, Best Roadster and Top Car at the Mattara Show in Newcastle, and Best Motor, Best Paint, Best Roadster and Top Car at the Taree Show. A photo of the car from the 1965 Sydney Motor Show show was printed in Hot Rodding Review November/December 1965, and according to the caption in the magazine, Gary's roadster was one of the best show/go rods of Australia at the time.[3] It returned to the National in 1966, where it took home the Best Interior award along with a third place in the roadster bracket. While Gary owned the car, it was also featured on the cover of Australian Hot Rod October/November 1965.

Gary sold the roadster to George Kotavich in the mid 1960s. Gary painted the car metallic burgundy, before he later on replaced the running gear with a 289 Windsor engine, that was hooked to a C4 transmission and a customline rear end. This was done when the Windsor's first became available. George sold the old hot rod to Bert Weingot, and from there on it went trough various owners, losing parts on the way. In 2003, Michael Morris of New South Wales, Australia, ended up witht the body, grille, headlights, front fenders, windscreen, shock mounts and a few other bits and pieces. After buying the remains, Michael spent the next 10 years collecting all the correct parts for the car it in order to restore it back to how it looked on the old photos he had found of it. Michael did also get in touch with Gary, testing his memory of 50 years ago about how it was originally put together.[2]

Please get in touch with us at mail@kustomrama.com if you have additional information or photos to share about Gary Wright's 1932 Ford.