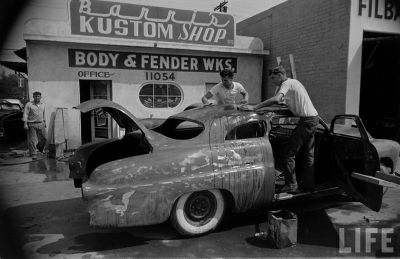 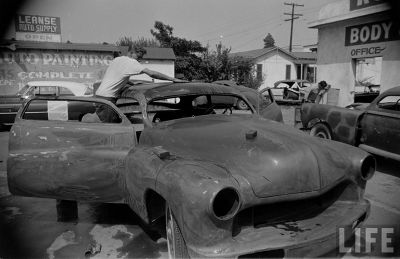 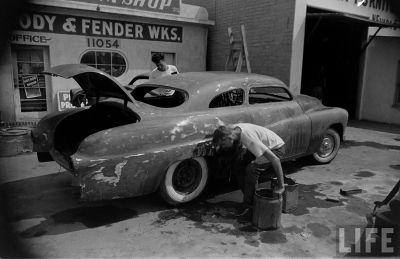 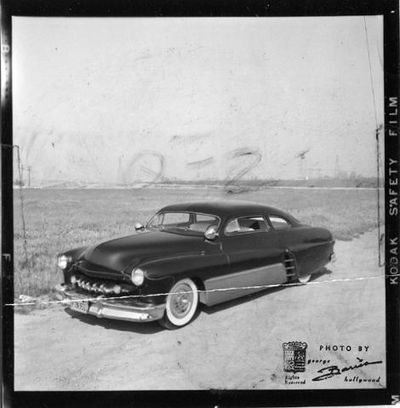 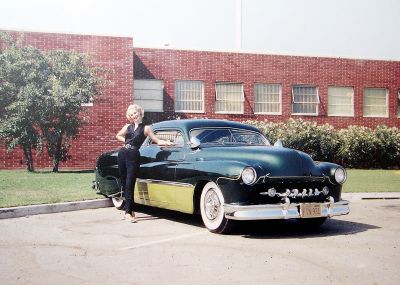 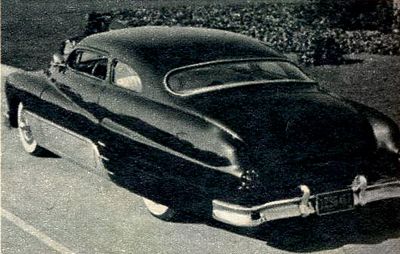 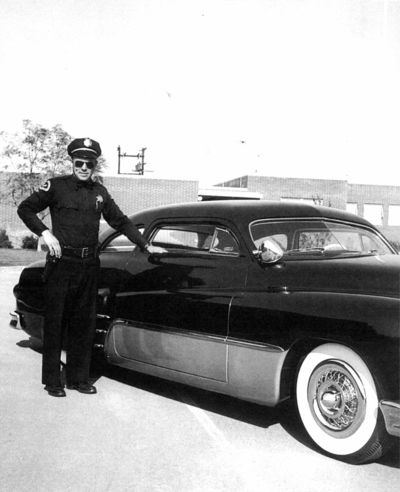 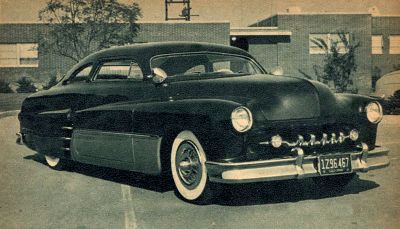 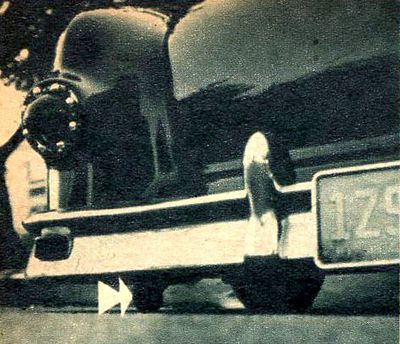 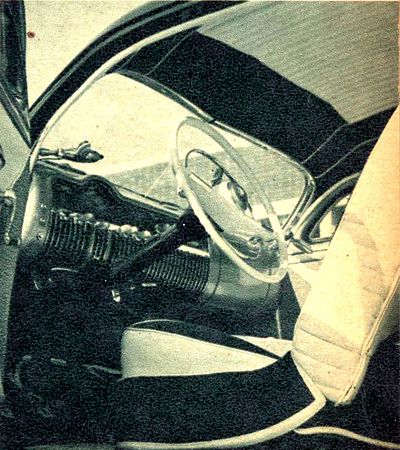 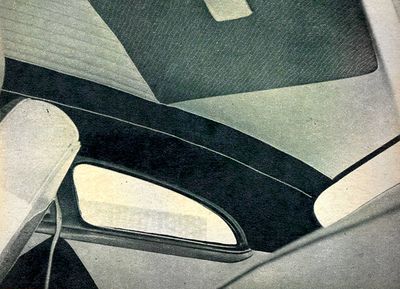 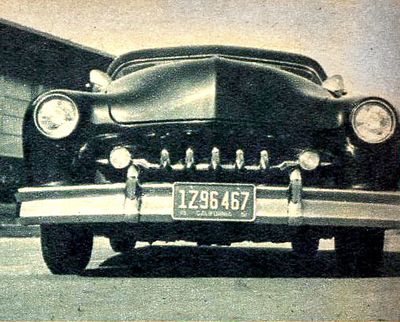 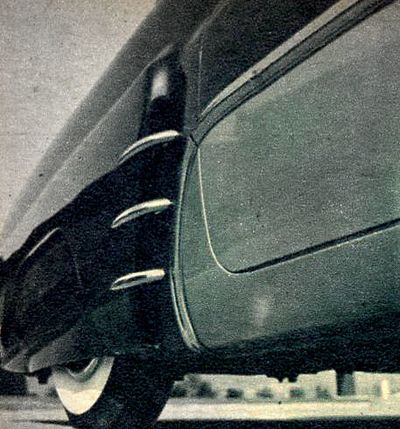 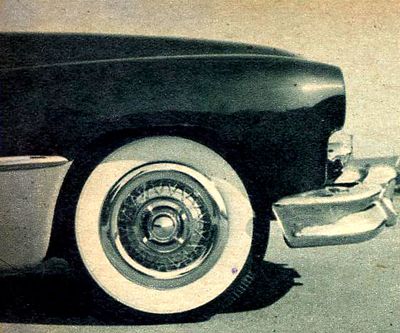 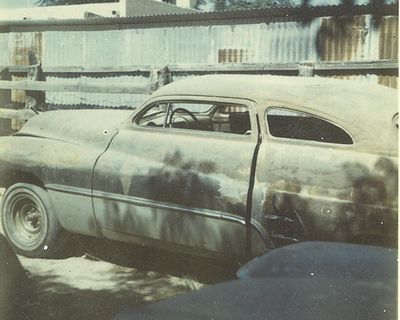 The Merc as it sat in 1974. Notice that all the lead from the beltline has melted away. 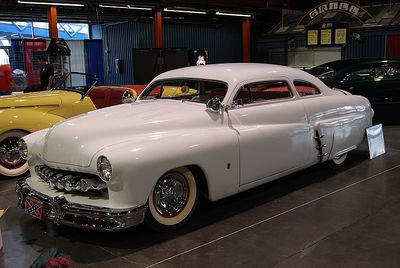 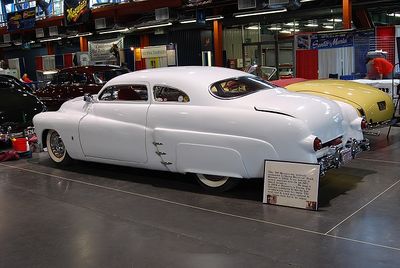 1950 Mercury Club Coupe restyled by Barris Kustoms for Frank Sonzogni of Lynwood, California. Frank worked part-time for Barris Kustoms and was a full-time police officer in Lynwood. He handed his car over to Barris Kustoms in 1953 for a makeover. This was one of those projects that seemed to take forever, In between working two jobs, his own car was constantly put aside. The car was built in a two years span.[2] The top was chopped 3.5 inches, and tapered to a 5 inch chop in the back. The B pilars were slanted forward and the rain drains were removed to achieve a cleaner look.[3] Frank filled the hood and rounded the hood corners as well. Both hood, doors and deck lid were shaved for handles and unnecessary trim, they were electrically operated by push buttons. A pair of 1952 Ford headlight rims were installed and frenched.[3] The grille shell was rounded and Frank installed a modified 1954 DeSoto floating grille bar. Frank swapped out the rear fenders for a set of 1951 Mercury quarter panels which he stretched to 10 inches. The frenched taillights were 1956 Ford lenses, which were set into a pair of 1953 Chevrolet parking lights housings. The rear gravel pan was molded to the body, and a set of 1951 DeSoto bumpers were added. The exhaust was routed throug the bumper.[3] Frank added a set of reversed 1953 Dodge side trims to outline the second color on the lower side panels, which fit awfully well to the Merc. Functional air scoops with 1953 Chevrolet trim teeth were crafted on the lower front section of the rear fenders.[3] Sonzogni modified the A arms up front,de-arched the front springs, re-spaced the coils and used a 6 inch step in the frame with 4 inch lowering blocks in the rear.[2] Dual Appleton spotlights and Ford wire hubcaps wrapped up the style. Once the bodywork was done, it was painted two-tone green with lime gold.[3] Finally Gaylord installed a white and green interior of green frieze and white Naugahyde. Frank highlighted the interior with a set of custom Bob Hirohata dash knobs.[2]

In the late 1950's, the car caught fire, it was by then located in Phoenix. In 1974, Larry Dames found the Merc, this time it was hiding in Tucson. He purchased the car and restored it back to show quality. The hood, deck-lid and roof were replaced, and all the custom work had to be redone once again. The car is still around, and is still owned by Larry Dames.

Please get in touch with us at mail@kustomrama.com if you have additional information or photos to share about Frank Sonzogni's 1950 Mercury.