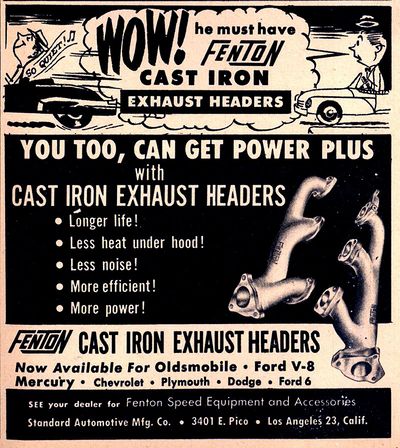 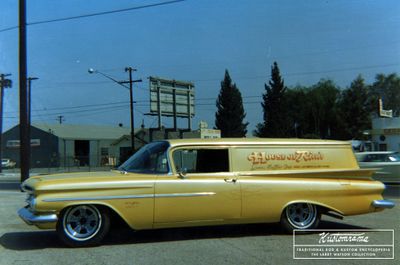 House of Rim's. A photo of Keith Christensen's 1959 Chevrolet Sedan Delivery from The Larry Watson Collection. Keith's sedan delivery ran hydraulic lifts, and it featured a Murano pearl yellow paint job with Gold leaf inserts by Larry Watson. It ran Fenton wheels when this photo was taken. The wheels were given to Keith personally by Aaron Fenton. "Aaron was an attorney that found the automotive more lucrative than practicing law. He wanted additional advertising and knew we were in the center of the wheel market, so he offered up a set of his newest wheels. I visited his factory and warehouse at least once a week to pick up products and at the same time, established a good friendship with him." Photo from The Larry Watson Collection, courtesy of Roger O'Dell. 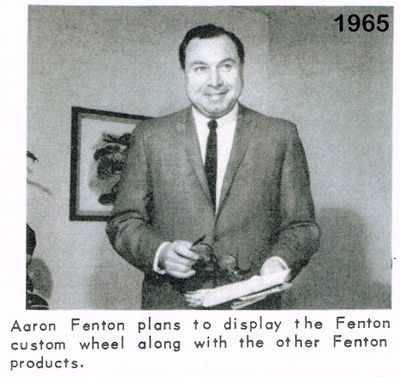 A photo of Aaron Fenton taken in the mid-1960s. Photo courtesy of www.vintagewheelcatalogs.com.

Fenton was a major auto parts manufacturing company in Gardena, California. Keith Christensen bought wheels from Fenton in the 1960s to sell at his shop Gene's Mufflers and he became good friends with its founder Aaron Fenton. "He was a lawyer in the earlier years" Keith told Sondre Kvipt of Kustomrama in 2020, "but found the auto industry expanding and got into manufacturing of a large variety of auto parts." Keith recalls Aaron starting out in the 1950s. "He was mainly into custom parts, but did also sell stock parts that he chrome plated."[1]

Aaron was approximately 55-60 years old when Keith first met him. "Black hair and trim." Keith recalls Aaron driving a used 5-year old Jaguar. "Strictly a point A to point B kind of car." He also recalls Aaron having a son. "When I met the boy in Aaron's office he was telling me of his great desire, and that was to build a car with all Fenton products on it." Keith don't believe the car ever came to fruition as the OHV engine took over the market.[1]

Keith remembered Aaron building a giant plant in Gardena. "He had a foundry, a polishing, and plating facility and an assembly area. The intriguing part of it all was his warehouse. It was bigger than all the rest combined." According to Christensen, it was a few football fields long, and three times as wide. "Five tier shelves ran through the majority of it."[1]

When Christensen stopped by to pick up wheels, Aaron would hunt him down in the warehouse and say, "Keith, come into my office. I want to show you a new wheel I am going to produce." According to Keith, Aaron was all business, no friendliness of sorts. "Never once saying I appreciate your input, or a thank you." Keith recalled that his office had new products strewn everywhere - "a real mess, but enlightening in what was coming up new!"[1]

"My gosh," Keith told Kustomrama, "out in the warehouse, there were boxed rims stacked on pallets up and down 70 % of the aisles. You couldn't get down the aisles or reach products on the shelves." Christensen asked him why he had the giant and mixed up inventory, and Aaron explained that he sold to large companies that had 100 or more retail stores, such as Sears, Montgomery Ward, and discount stores which at the time were Whitefront, Fedmart and such. "He used Montgomery Ward, as an example and I remember what he said really well, "He said, Keith, each time I bring out a new style of wheel there were five different bolt patterns, four different widths, and three different diameters at that time 13"-14"-15"." He told Keith that he would send six sets of each to each store and Montgomery Ward had over 110 stores. "He said, Keith, just do the math - If I have 20 different bolt patterns and rim widths - it is nothing to send 60 wheels to each store X 110 stores, that's a lot of wheels every time I bring out a new style wheel. He was right and I could now see why his aisles were full 10 high on each pallet and each pallet heading to a store somewhere."[1]

According to Keith, Aaron's method was just to produce tons of them. "There wasn't an inventory control. He gave me free rein to rummage around the warehouse and find anything I wanted. When I finally pulled the items, he insisted that I get him and he would come out and count and total it himself and I would pay him cash." Aaron never made a deal on price lowering no matter what Keith bought, so he started buying seconds, "a little chrome blemish, or a non polished spot on an aluminum wheel. Since I was already in the warehouse, I could cherry-pick what I bought. He always came out to count what wheels I purchased. White shirt. Tie and all. He would take the cash. Pocket it and go back to his office." Keith did benefit money-wise on that endeavor, as the seconds put him below the price market on other brands. "I did the same thing with Ray Bleiweis at Rocket. Same routine, except he invoiced everything." Keith remembers Aaron as a good businessman, "but he counted on increased production and volume to guide his enterprise. Not inventory control! He had volumes of wheels sitting everywhere."[1]

"A feature of all of this that was intriguing was over the piles of cases on the shelves that I climbed up to, standing on the pallets of rims, I would find items, that now would be collector's items. Such as chrome radio fronts for 1940 Fords, or hood ornaments for as far back as 1936. Chrome headlight and tail light rings for every Ford or Chevrolet ever built! Custom gear shift knobs, peddle covers for the pedals on the floor, aluminum valve covers, dual carburetor manifolds for flathead Mercury and Ford motors, and a lot more -"endless." At that time that I saw them, they weren't valuable, but think of present-day for people customizing cars."[1]

One time, as Keith was trotting along thru the warehouse with Aaron, they passed 2 workers leaning on a pallet full of wheels and talking. "Aaron did walk fast. All business. As we passed by, Aaron slowed his pace a little and said over his shoulder "You're fired!" And his fleeting remark was "Go into the office and draw your check," our pacer didn't slow," Keith recalled. On another adventure with him, Keith spotted a 1/2 dozen big polishing lathes out in the field next to his main building. "I had opened a polishing shop at my store, between the two buildings, Muffler and Chrome, so I asked Aaron if he wanted to sell them. He said "Yes," and off we go. He and I across his manufacturing area and out to the field. As we stood there in the weeds, I looked over and saw something shiny in the grass and walked over finding a pile of new wheels in the grass. The workers were stealing them from him at night. Boy, the ruckus started. He stopped the head of manufacturing and distribution and brought them out in the field, which by the way had a 6-foot chain-link fence. He read them a riot act! First time I had seen his temper. He ordered the fence raised to 8 foot and all weeds removed." Back to the big polishing lathe, "he gave me a price. I paid him cash and we walked off. Never one thank you! That was part of the business with Aaron. Keith was pleasantly surprised when he donated a set of wheels for his 59 sedan delivery, "but alterior motives were to get exposure in the market and he knew I took the panel to different car shows."[1]

Cars Featuring Parts Made By Fenton

Please get in touch with us at mail@kustomrama.com if you have additional information or photos to share about Fenton.