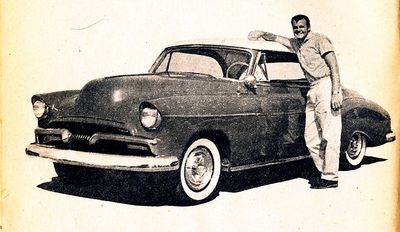 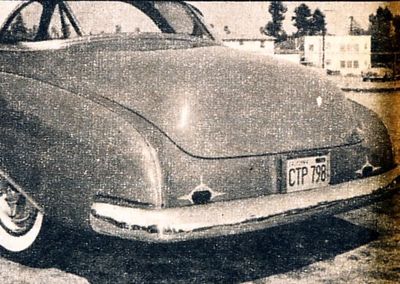 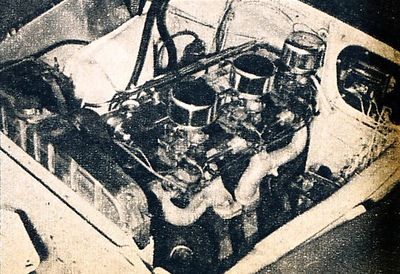 1950 Chevrolet Bel-Air owned and restyled by Roger Fleiss, of California. Roger's smooth Chevy was nosed, decked and shaved for door handles. The two-piece stock windshield was replaced by a one-piece 1950 Oldsmobile unit. Both bumpers were cleaned for guards and bolts. Up front, a 1955 Plymouth grille was installed, along with a set of 1955 Chevrolet headlights. These modifications rendered the whole appearance of the front, making it look much newer. The rear wheel openings were rendered by welding on flared panels from a 1955 Oldsmobile. The taillights were made from 1940 Oldsmobile components, surrounded by subtle pin-striping. The car was painted red, with the top done in white. The hubcaps were from a 1955 Dodge Lancer. One spotlight was installed on the driver's side.[1]

Roger enjoyed the low speed torque of the straight-six, so he rebuilt it to stock modifications, then added bolt-on modifications for better breathing. Fenton headers and a rare Harper triple manifold was installed to give better top end performance with good torque. He spent 2 1/2 year building his custom.[1]

Please get in touch with us at mail@kustomrama.com if you have additional information or photos to share about Roger Fleiss' 1950 Chevrolet.