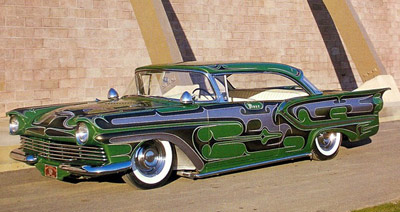 Jerry DeVito's 1957 Ford Fairlane of San Jose, California. The second version of Jerry's Ford, known as the Maze, was completed in 1958, featuring a radical scallop paint job by Bob Heinrichs.

Bob Heinrichs of San Jose, California is a legendary pinstriper and custom painter. According to custom painter Joe Crisafulli, Bob was a great stiper, straight and even. If Joe needed a car striped, he would pick Bob. In the 1950s and 1960s Joe Crisafulli was also pinstriping cars in the San Jose area. Joe worked on the west side of the city, and the only competition he had was Bob, who worked on the east side.[1]

In 1958 Jerry DeVito asked Bob if he could help him paint his 1957 Ford. In 2015 Bob told Kustomrama that Jerry’s ideas were always very spectacular. "He thought outside the box. We are old friends and I was always amazed at his ideas. I wasn’t painting cars full time yet in 1958 but I had been pinstriping cars for about 6 years when he asked me to do a wild paint job on his 57 Ford. He wanted a paint job like no one had ever seen. Since I was driving cement truck for a living I had to work on his car at night and it took awhile.

The first thing I had to do was set up my garage so I could do the work at home. My work on his car began with prepping the car before I began the laborious task of masking and laying out the tape. Mind you I had to lay out the design over the complete car – the roof, hood, trunk and sides. It took about 4 days of taping the design before I was ready to do the masking.

So here Jerry enters the picture… I took the weekend off and when I came home Jerry’s car was gone. I thought someone had broken into the garage and stolen the car. I called Jerry to see if he knew anything about it. Indeed he did! He had a hot date that Saturday night and he needed the car. So…he removed all the designs, tape and masking paper and enjoyed his car for the evening. He did offer to help me retape and remask the car.

Three weeks later the car was ready to show. Jerry called George Barris who came up to San Jose to take pictures of the finished product. Those photos ended up in a lot of the car magazines of the day."[2] Jerry told Bob that he wanted a wild paint job, and that's exactly what Bob gave him. The paint job on the second version of the Maze is in fact one of the most radical paint jobs of the 1950s.

Bob scratched his way trough. He had no money to buy any custom cars for himself, he just painted cars for everyone else. He stopped painting cars in the early 1960s, and he got a regular job driving a truck. In 1967, Bob opened up Heinrichs Custom Body and Paint Shop in San Jose, California. At the shop Bob customized and painted cars, lowriders, motorcycles, boats, rv's and vans. He retired after 37 years, and in 2005 he moved to Grants Pass, Oregon. In 2015, at age 82, he was still pinstriping.

Please get in touch with us at mail@kustomrama.com if you have additional information or photos to share about Bob Heinrichs.