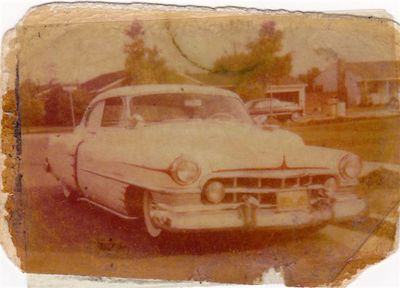 Ron Bianco's Cadillac. This was the first car that Joe scalloped. Photo courtesy of www.rodandwheelers.net. 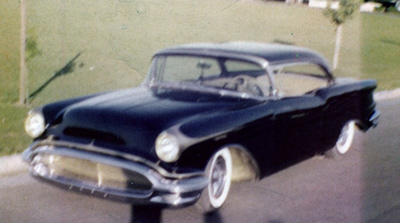 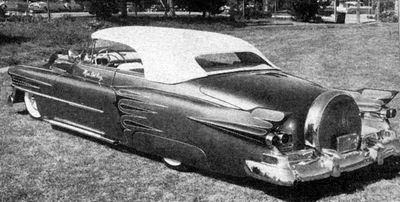 Phil Macchiarella's 1950 Plymouth four-door of Santa Clara, California was painted by Joe. The first version of the car was completed around 1955/1956. 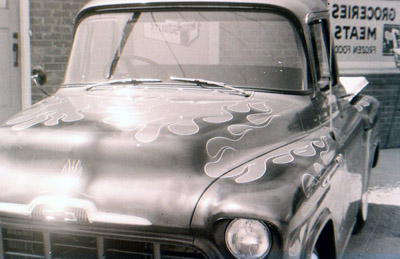 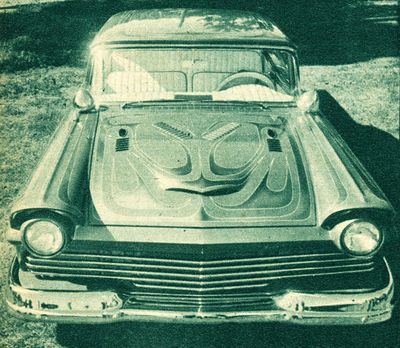 In 1957, while running J & J Auto Painting out of his dad' garage, Joe gave the first version of Jerry DeVito's 1957 Ford Fairlane a scallop paint job. 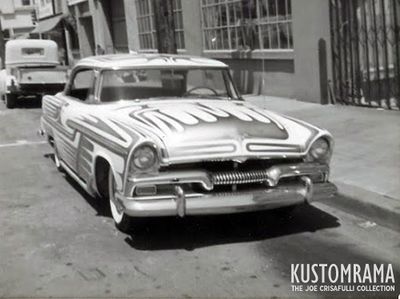 A 1955 Plymouth that Joe restyled while he was running River Body Shop in San Jose circa 1957 - 1958. The car belonged to a fellow member of the San Jose Rod and Wheelers. Photo from the Joe Crisafulli Scratchbook and Photo Collection. 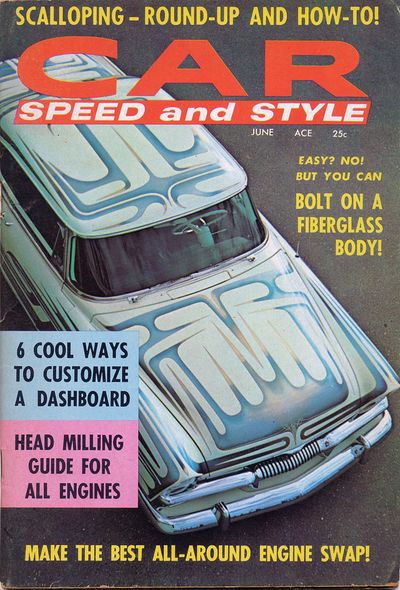 The River Body Shop Plymouth was featured on the cover of Car Speed and Style June 1958. 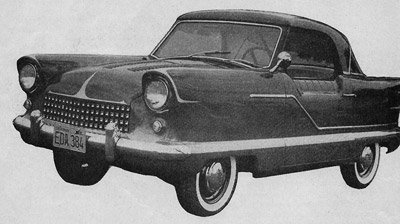 Joe Crisafulli's 1951 Oldsmobile. Joe restyled and painted the car himself late in 1959. 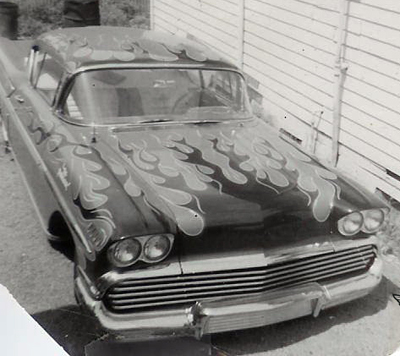 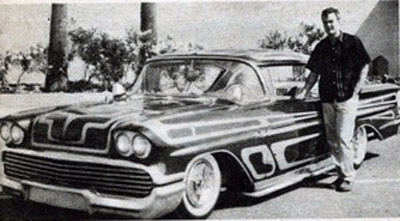 The second version of Chuck Burkart's 1958 Chevrolet Impala, featuring a scallop paint job that Joe Crisafulli laid in 1959. Chuck was also a member of the San Jose Rod and Wheelers. 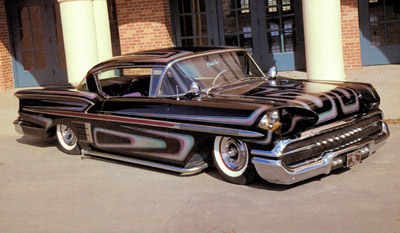 Frank Goehring's 1958 Chevrolet Impala was restyled by Joe at Flyers Body Shop. The build was completed in 1959. 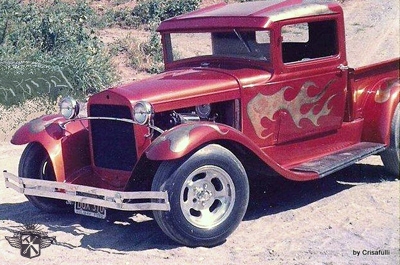 Joseph John Crisafulli of San Jose, California is a legendary custom painter, builder and a founding member of the San Jose Rod and Wheelers car club. The club was formed by Joe and five other members in 1954. In order to get in to the club, and hang a plaque on your car, you had to have something done to your car. Custom work or engine work. In the beginning, Joe believes he was the only one in the club that had a car that featured custom work. Joe had a 1947 Ford that Ken Conn had shaved the deck lid on, and Joe had installed 1949 Lincoln taillights on himself. After that they needed a dragster, so the club decided to rebuild the engine. Ken's dad had a Ford auto repair shop. With a rebuilt engine and tranny, the club were off to the drags at Little Bonneville in San Jose, California.[1]

While working on a farm in the country, a friend told Joe that a person in town was looking for help in a body shop. The guy was a Japanese named Flyer Tabata, and the shop was Flyers Body Shop. Joe remembers that Flyer, who was about five years older than Joe stood about five feet high and was all muscle. He also remembers that he used to ride his BSA bike down the street fifty mph standing on the seat with one hand on the handle bar. Joe started at Flyers as an apprentice painter. The shop closed down after about a year, but Flyer told Joe he would call him when he opened up another shop. In the meantime, Joe went to work for a local GMC dealer.[1]

In December of 1956, while working as an apprentice painter at the GMC truck shop, Joe bought a 1956 Oldsmobile. He was 20 years old at the time, and had saved for a long time just for the down payment. The truck shop let him use the torches at the shop to weld the hole in the hood after he had shaved it. He was not allowed to use the paint booth, so he gave the car a shiny black paint job with gold scallops in the family garage, on a cool summer night in 1957. The garage was a garage with a dirt floor and no doors. Joe recalls that it was Friday 11 pm when he finished painting the car, and that he drove it to work on Monday. Before the car was painted, Joe had lowered it and removed all moldings. The door handles were shaved and filled, and the original bar was removed from the grille. After removing the bar, a 1934 Chevrolet grille was installed inside the opening. Joe believes he traded the Oldsmobile for a 1957 Cadillac. After getting the Cadillac, he molded lowered and repainted it. One day a doctor drove by Joe's mothers house. He saw the Cadillac parked in front of the house, and stopped to ask if it was for sale. He had fallen in love with the car, and told Joe he just had to have it. The doctor came back with cash and the pink slip for his 1951 Oldsmobile. The 1951 Oldsmobile had all the bells and whistles on it,including a Continental Kit when Joe got. He removed all that.[1]

While working out of his dad's garage, Joe decided to start his own shop called "J & J Auto Painting". J & J stood for Joseph John. In his shop, Joe had a compressor made out of a refrigerator pump and a hot water heater tank. He did the body work in the garage, but painted elsewhere. Like Tony Alvez' 1950 Cadillac, that he painted on the lube rack in Fred Spitilary's Flying 'A' gas station. Tony won an award at the Oakland Roadster Show with the Cadillac after Joe had painted it. While running J & J Auto Painting, Joe also painted scallops on the first version of Jerry DeVito's 1957 Ford, The Maze.[1]

Joe had two Binks 19 with 66 SE and 66 SD air caps that he used for painting. The SE was a low air consumption cap that worked fine with the refer pump. The Binks were great for Lacquer, low orange peel. Joe did 75% of all his early custom jobs with the Binks. He also had a Devilibiss JGA. A great production gun that used over 13cf of air, so it was good for doing trucks and trailers at Flyers. Most of the flames and scallops were laid using the Binks. J & J Auto Painting never made it past Joe's dad's garage.[1]

River Body Shop was another one of Joe's adventures; "The shop was on River Street, with the river behind the shop. I was at that location for about one year. Did a lot of nice cars there. Then winter came and the river rise. It came through the back door to the street. The shop was full of mud, so I couldn't do anything but quit. The landlord said I could cancel the lease." Joe's brother, Larry, was a bodyman, and worked with Joe in the shop. Tony was another bodyman that worked at the shop.[1]

A year after Flyer had closed down his shop, he called Joe and told him he had more money. He had a shop built around the corner from where Joe lived, so Joe could walk to work. When Flyer opened the new shop he went to all the trucking companies and started to repair and rebuild truck bodies. This was big trucks, so most of the bodies were made of aluminum, so Flyer buys a welder that would do anything. Joe recalls that the thing was as big as a VW. It sat on the floor, and you couldn't move it. It was just Joe and Flyer in the shop, and Flyer asked Joe if he knew how to use it. Joe replied no, and Flyer told him they would learn together. As the shop didn't have a lot of work, Joe began to bring his friends cars in for customizing. Joe did a lot of cars while working for Flyer. He got paid by the hour. In 1959, while working at Flyers Body Shop, Joe painted a car almost every two weeks.[1]

One day, while Joe was working for Flyer, Bill Babb of Wirth's Body Shop stopped by. Babb was manufacturing and selling flexible bondo in addition to running the custom shop. Flyer was a hard Japanese to sell to, so Joe saw Babb a lot. Joe and Babb would bullshit about cars and painting, and one day Babb asked Joe to come over on a weekend to see his shop. Joe remembers that the shop did not look very good, but it was a fun shop, as they were always in a good humor. After visiting the shop, Joe started to paint cars for Wirth's Body Shop. Babb and Wirth did not tell Joe how to do the job, and they liked what he did. Joe got paid when the job was done, so he was satisfied on his side.[1]

In the 1950s and 1960s Joe Crisafulli was pinstriping cars in the San Jose area. Joe worked on the west side of the city, and the only competition he had was Bob Heinrichs, who worked on the east side.[1]

In 1976 Joe was living in Almaden, San Jose, in an old quicksilver mining town. The three rom house he was living in was an old miners cabin that had a large chicken coop in the backyard. There were no chickens in the coop at the time, and Joe used it as a paint booth.[1]

Please get in touch with us at mail@kustomrama.com if you have additional information or photos to share about Joe Crisafulli.