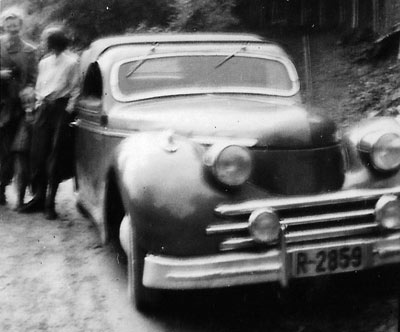 Alf Rasmussen's 1936 Ford of Bergen, Norway. Alf bought the chopped, channeled and sectioned car from a British or American pilot in Bergen in 1951 or 1952. The pilot had worked in the Independent Norwegian Brigade Group in Germany after WWII, and was now returning home to his girlfriend. 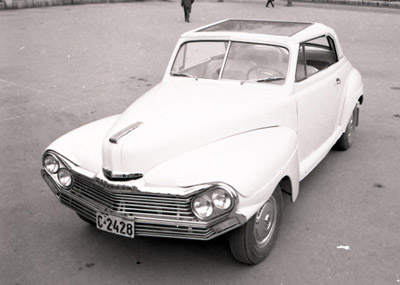 Per Ivar Kolgrov's 1948 Mercury Convertible of Oslo, Norway was restyled around 1963/1964. The car is known as the first custom cars of Norway. In 2009 the car was advertised for sale on AutoDB. At the time it was located in Bergen.

Bergen is a city and municipality in Hordaland on the west coast of Norway. One of the earliest custom cars of Bergen can be traced back to 1951 or 1952, when Alf Rasmussen bought a chopped, channeled and sectioned 1936 Ford from a British or American pilot that had worked in the Independent Norwegian Brigade Group in Germany after WWII. The car was sold in 1955, and nobody knows what became of it.[1]

Kjell Trellevik is another Norwegian hot rod and custom pioneer. Kjell was born and raised in Bergen. In 1959 he moved to Gothenburg, Sweden where he first was exposed for mildly restyled customs. In Sweden Kjell bought a Ford Crown Victoria that he began restyling; "I had big plans for that car, but I didn't have much time to work on it before I moved back to Norway in 1961," Kjell told Sondre Kvipt of Kustomrama in 2017. Back in Bergen, Kjell bought a 1940 Ford that he started hot rodding. "There was a small scene for restyled cars in Bergen back in those days. In addition to my 1940 Ford, my buddy Torolf Viken had a hot rodded 1939 Chevrolet Coupe with a Buick V-8 engine. There was also a 1940 Oldsmobile coupe, a 1939 Studebaker coupe, and a Buick coupe." Kjell believes that him and Torolf had the first hot rods in Bergen.[2]

Please get in touch with us at mail@kustomrama.com if you have additional information or photos to share about Bergen.