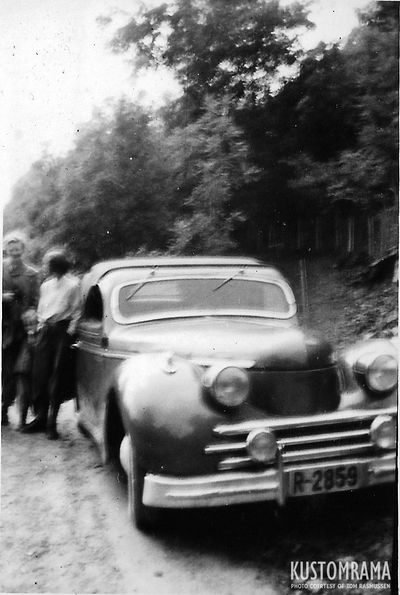 A photo of Alf's Ford taken in 1952. Photo courtesy of Tom Rasmussen. 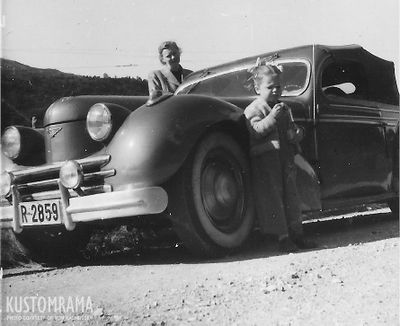 A photo of Alf's wife and daughter with the Ford. The photo was taken in 1953. Alf's son Tom is laying naked and toothless in a babybag in the backseat of the car when the photo was taken. Photo courtesy of Tom Rasmussen.

1936 Ford owned by Alf Rasmussen of Bergen, Norway. In May of 2016 Alf’s son, Tom, told Kustomrama that both his father and grandpa were crazy about Automobiles; “American made automobiles were dad’s favorite. He bought the car from a British or American pilot in Bergen in 1951 or 1952. The pilot had worked in the Independent Norwegian Brigade Group in Germany after WWII, and was now returning home to his girlfriend.” After WWII you needed a special permit to buy cars in Norway, as the Norwegian government wanted to reduce consumption of imported goods. As a result of this, there were only 18 cars per thousand citizen in Norway in 1948, and automobiles were considered luxury during this time. Alf was a secretary for the Norwegian Civil Defence, so he got a special permit to buy a car as he needed it for work purpose. Alf told Tom that their car was made from several types of cars. The Ford body had been chopped, channeled and sectioned, and the roof had been cut off, converting it into a convertible. The front bumper and grill looks homemade, and the headlights were sunken into the fenders. Tom believes his dad told him the transmission came from a French automobile. Tom’s mother wasn’t happy with all the attention the car created, so in 1955 they sold it and bought a Renault 4CV. A car that also had more space in the backseat.[1]

Who built this car? What happened to it after Alf sold it? Where is it now? If you have more info on this old Norwegian custom, please get in touch with us at mail@kustomrama.com.

Please get in touch with us at mail@kustomrama.com if you have additional information or photos to share about Alf Rasmussen's 1936 Ford.