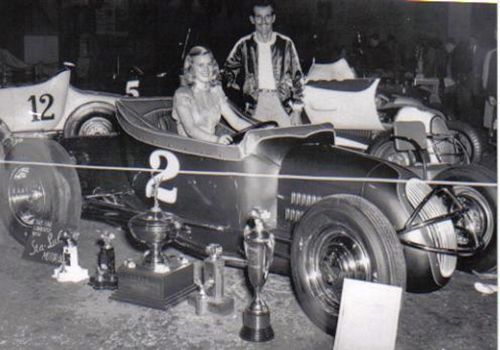 Larry Neves' Ford Model T at the 1950 National Roadster Show. The girl in the car is Miss California, Jone Pedersen. Larry's roadster came second to Bill NieKamp's 1929 Ford roadster for the America's Most Beautiful Roadster award at the show. 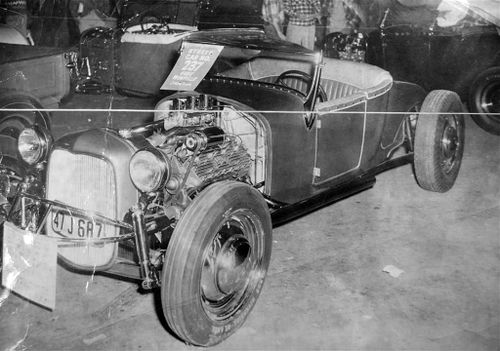 A photo of Gene Winfield's 1927 Ford Model T Roadster from the 1950 Oakland Roadster Show. This photo was advertised for sale on eBay in June of 2018. With a number 237, Gene must have been one of the late entries. 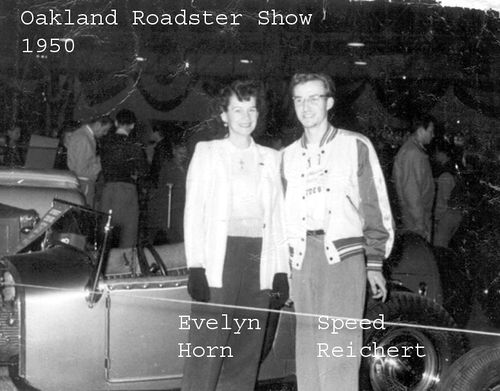 The first annual National Roadster Show was held January 19-22, 1950 at the Oakland Exposition Building in Oakland, California. Known as the Oakland Roadster Show, more than 25,000 persons visited the show during the four days. William A. NieKamp's 1929 Ford Model A Roadster was awarded as the first "America's Most Beautiful Roadster". Runners-up for the honor were the 1947 - 1948 championship roadster of Larry Neves of Oakland, California and the no. 100 entry of Fred Ige of Los Angeles. A total of 45 trophies were awarded in a ceremony. [1]

A show feature during the show was the construction of a roadster in 32 hours. The car, built under the direction of Ben Hubbard was started up successfully Sunday night. The exhibition also was marked by a Navy plane and engine display, an Oakland Police Department movie and safety exhibit, a showing of ancient automobiles and an electric train hobby display.[1]

Please get in touch with us at mail@kustomrama.com if you have additional information or photos to share about National Roadster Show 1950.