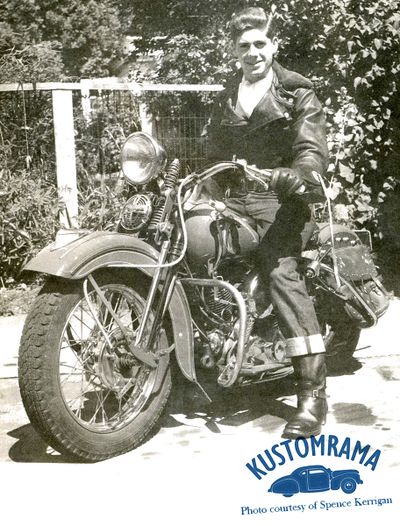 Bill Carash circa 1943. Bill's 1939 Harley-Davidson was originally equipped with a flathead 80 cubic inch engine. Bill replaced it with a 61 cubic inch OHV engine several years later. Bill still owned the Harley when he passed away in August of 1999. Photo courtesy of Spence Kerrigan. 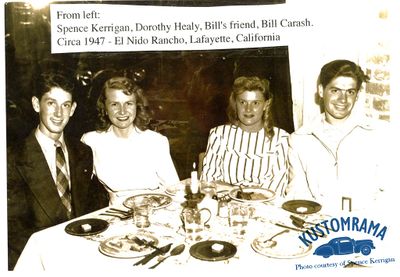 From left: Bill's buddy Spence Kerrigan, Dorothy Healy, another one of Bill's friends and Bill Carash. The photo was taken circa 1947 at El Nido Ranch in Lafayette, California. Photo courtesy of Spence Kerrigan.

Bill Carash's Roadster. The build was started in 1945, when Bill was 17 years old. It was done just in time for the 1950 Oakland Roadster Show, where it won an award for originality in the Street Division. 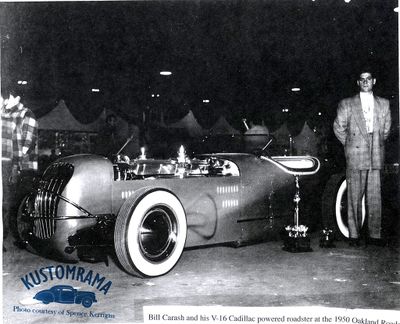 Bill with his price winning roadster at the 1950 Oakland Roadster Show. Photo courtesy of Spence Kerrigan. 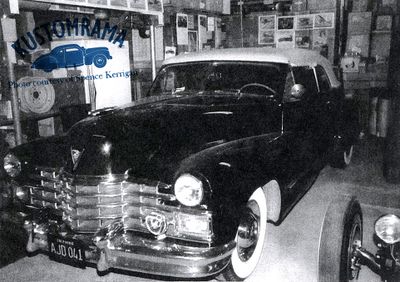 A photo of Bill Carash's 1941 Cadillac convertible taken in his Berry Creek shop circa 1992. Bill installed a new OHV V-8 engine in the car when Cadillac introduced their OHV V-8 engines. The car was in Bill's shop when he died in 1999. Photo courtesy of Spence Kerrigan. 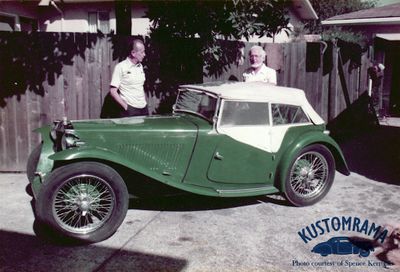 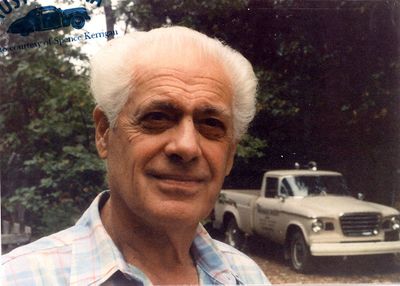 A photo of Bill taken in October of 1992. Photo courtesy of Spence Kerrigan. 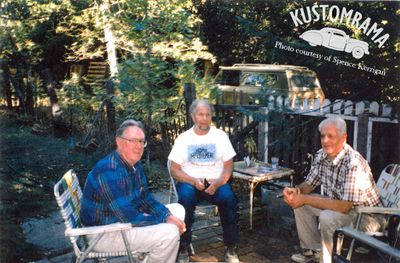 Bill Carash of Oakland, California was an excellent craftsman and an expert welder. Bill didn't join any car clubs. He was an active motorcyclist, and bought a 1939 Harley-Davidson 80 about the time he graduated from high school. Later on, the flathead engine was replaced by a 61 cubic inch OHV engine.[1]

In 1945, at age 17, he began to build a custom roadster around an enormous 1932 Cadillac V-16 engine. The car, known as the Bill Carash Roadster, was completed in time for the 1950 Oakland Roadster Show, where it won an award for originality in the Street Division. After the first roadster was completed, Bill bought a new surplus 1000 HP Allison 12 cylinder airplane engine intended for use in a P-39 airplane. Those WWII planes had engines behind the cockpit and a drive shaft to the propellor, that made adapting it fairly easy so he planned to build another car around this engine. He got an offer he couldn't refuse from someone who needed the engine for an airplane, so he sold it before the build was started.[1]

Spence Kerrigan, a friend of Bill that assisted Bill when he built the Cadillac powered roadster remembers that Bill was offended by the term "hot rod". To him it was a derogatory and synonymous with jalopy or what he described as a Model A Ford with a Ford V-8 engine and tail lights hung on with balling wire. Roadster was more correct for the type of car that interested him.[1]

Bill rand and operated an auto repair shop in Oakland together with his friend Dave Moore. Dave had a jalopy with a Cadillac V-12 engine. They ran the shop until they both moved to Berry Creek, California. In Berry Creek Bill and Dave were neighbors.[1]

Bill passed away of Laukemia August 25, 1999. At the time he was living in Berry Creek, California. When he passed away he had a huge collection of cars, and he still owned his Cadillac Roadster and the 1939 Harley-Davidson.[1]

Please get in touch with us at mail@kustomrama.com if you have additional information or photos to share about Bill Carash.