From Kustomrama
(Redirected from William A. NieKamp's 1929 Ford)
Jump to: navigation, search 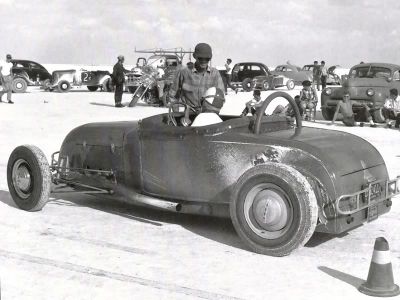 Dick King talking to the driver of the NieKamp roadster.[1] 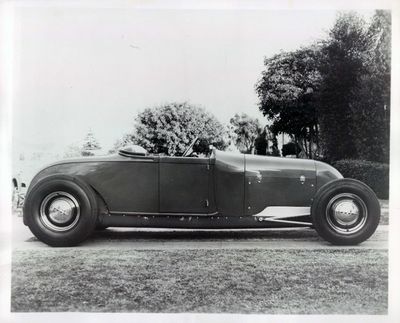 The NieKamp roadster as it appeared in 1953. 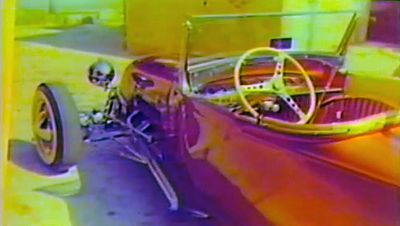 The Niekamp roadster as it looked after Larry Watson of Watson's House of Style had given it a fadeaway paint job for Delmar Brink in 1959. 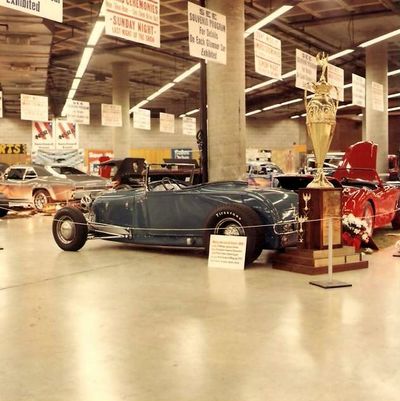 The NieKamp Roadster at the 1973 Grand National Roadster Show.[2] 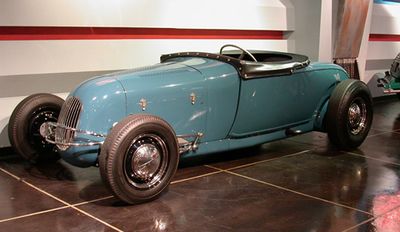 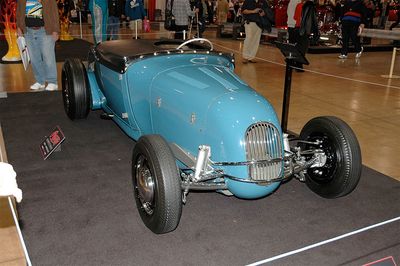 The Bill NieKamp Roadster at the 2009 Grand National Roadster Show.Photo by Howard Gribble 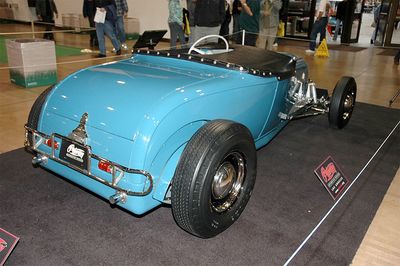 1929 Ford Model A Roadster built and owned by Bill NieKamp of Long Beach, California. According to Hot Rod Magazine March 1950, it took Bill more than thirteen months to complete the build. Working as a professional automobile painter during day, Bill figured he had devoted 6 hours a day, 365 days average time constructing the car. NieKamp used 1927 Essex frame rails on the roadster. He added a Model A rear crossmember and an inverted Model A crossmember for the rear engine support. A front crossmember was made from chrome-moly tubing with gusseted spring mount bracket. The front axle was from a 1939 Ford V-8 60, and it had been fit with earlier model spring perches. A 1931 Ford Model A rear spring was mounted to a 1939 Ford 3.54:1 rear end. The torque tube was shortened 18 1/8" to fit the 110" wheelbase. The drive shaft was from a Model A as well, and it had to be shortened and re-splined to fit the car. Teardrop fairings were built around the rear axle and spring assembly to reduce air turbulence. The Rear suspension employed two sets of shocks. A pair of Houdaille needle adjusted Fords controlled up and down movement, and tubular type Gabriels were mounted at 45 degree angle to control body sway. When Bill's roadster was featured in Hot Rod Magazine March 1950, it rolled on 15x5" Mercury wheels with Mobile 5.50 tires up front, and special 15x6" Riggs wheels in the rear. The brakes were 1941 Ford hydraulics, and the steering mechanism was mounted using 1935 Ford cross-steering gear box assembly. Bill installed the piece so that it was turned on its side (1/4 turn clockwise), and used an upright pitman arm. This permitted the drag link to ride in a level position with no bending necessary. The small trunk featured a 1928 Chevrolet gas tank. The deck latch was hand-made and remotely controlled. NieKamp's roadster was powered by a 1942 Mercury Flathead V-8 with stock bore and stroke. Heads were Evans, manifold Weiand, cam Winfield, ignition Kurten, and pistons were Thompson three-ring. Bill ported and relieved the engine himself. He did also build up the stock valve ends with Stellite. Electronic Balancing Co. of Long Beach balanced the engine.[3] Talented metalsmith Whitey Clayton of Clayton Metal Shop handcrafted a track-nose, hood and belly pan in aluminum for the car. The nose received a hand-made grille also by Whitey. In addition to this, it is also believed that Whitey did the vertical section that shortened the body.[4] The car was built from sections of four different 1929 Ford Model A bodies, including a coupe. The right door was made from an old coupe door. The interior was finished in blue leather trimmed with soft chrome strips and silver plastic. The minimalistic instrument panel featured three 1949 Plymouth instruments. The steering column shift and transmission were taken from a 1941 Ford.[3]

Bill's roadster was built for street and lakes use. A chromed 1929 Ford windshield and seal beam headlights were added for street usage. The roadster did also have two large snap-out plugs on each side of the belly pan where stack could be inserted in place of the asbestos wrapped M&M mufflers. Once completed, NieKamp's roadster won America's Most Beautiful Roadster at the first National Roadster Show in 1950.[3]

In 1958, Delmar Brink of Bellflower, California bought the roadster. Delmar was a high-school classmate of Larry Watson, so he brought it over to Watson's House of Style on Bellflower to have Larry paint it candy grape over platinum pearl. In 1959, Delmar brought the roadster back to Larry for a fadeaway paint job. Larry started at the track nose with a very deep candy apple root beer, and gradually faded the color all the way to the rear into a rich gold powder under base.[5]

Please get in touch with us at mail@kustomrama.com if you have additional information or photos to share about Bill NieKamp's 1929 Ford.