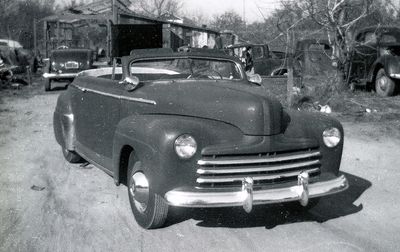 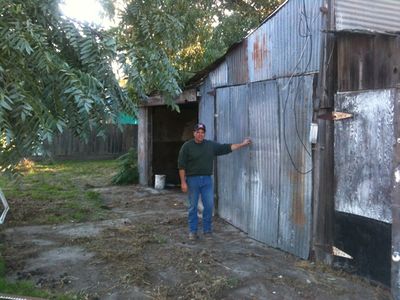 The old chicken coop as it looked in January 2011 when Albert Coito and his brother bought it. Albert is standing next to the old building in this photo. Photo from California Urban Prospectors.[1] 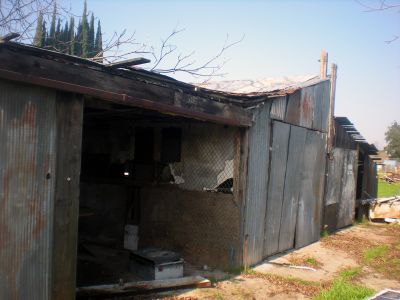 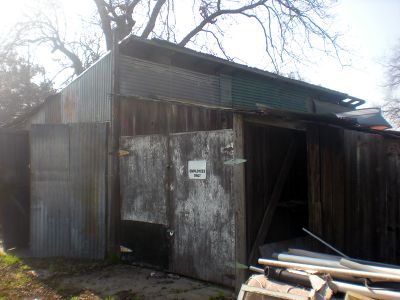 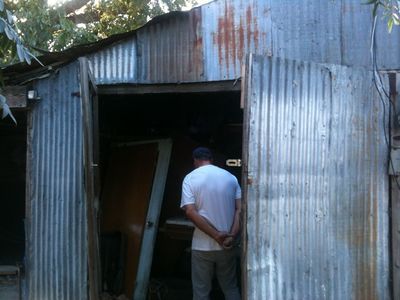 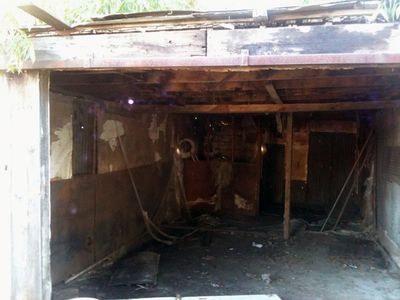 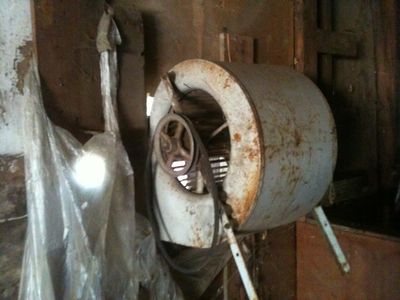 The original blower in the paint booth. Photo from California Urban Prospectors.[1] 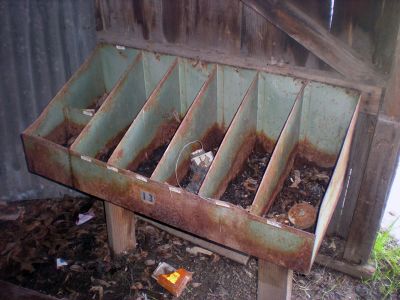 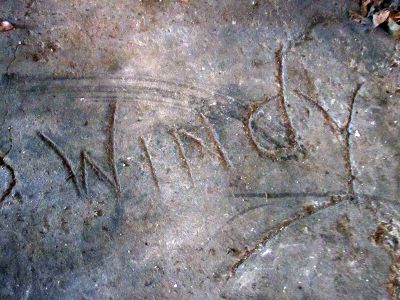 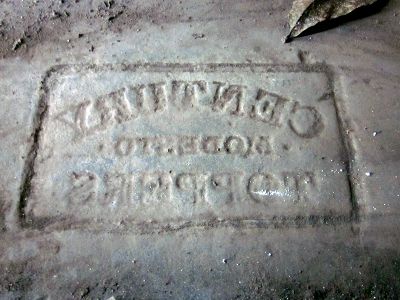 After returning from the Navy, Gene Winfield opened up his first custom shop in 1946. The shop was named "Windy's Custom Shop", and Gene opened it up in an old chicken house behind his mothers house at 1309 Figaro Avenue in Modesto, California. The "shop" was about 20 feet by 35 feet, and had a dirt floor. One of the first cars that Gene modified in the shop was his brother Frank Winfield's 1941 Plymouth. Working on his own and on his brothers car in the chicken coop, he started to get calls from friends wanting him to work on their cars as well. In the beginning Gene was just doing simple modifications such as lowering suspension and shaving emblems, but as business were picking up Gene also started doing more advanced work like changing grilles, modifying headlight and taillights, and eventually chopping tops. One of the first cars Gene did extensive custom body work on was Alvin Serpa's 1946 Ford Convertible.[2]

As business were picking up, Gene added on to the shop and doubled its size. Not long after expanding the shop Gene had so much work to do, so he had to hire some employees. He added on to the chicken house again, and built his own spray booth with a drain and lights on the sides. In late 1949, Gene closed his shop, and reported to the U.S Army. He was stationed at Fort Ord near Monterey, California, about two hours from Modesto. While on leave Gene would go to Modesto in order to work on and race his roadster. In late 1950, the army shipped Gene to Japan as a trained cook, but when he arrived, he was placed in charge of the battalion hobby shop instead. In Japan, Gene and three other GI's came together and rented a small shop in the city where they started building cars. After opening the shop, they hired a Japanese metal man. Not able to pronounce his name, the only called him "Hammer Happy". Hammer Happy earned $6 a day working for Gene and the other GI's. In the shop, they built 4 cars. The first was a little sports car with a Crosley engine. The second was a full-size sports car based on a 1939 Ford convertible with a loaded flathead and stepped frame, front and rear. The third car was a half-chopped and half-sectioned 1941 Ford coupe that they installed 1946 Ford] fenders on. Gene raced the 1941 Ford in the first stock car event ever held in Japan. The fourth car they built in Japan was a 1941 Ford convertible that they hand formed new front fenders, hood, and a grille for out of sheet metal. Working with the young Japanese craftsman, Gene learned how to do fine hammer-welding, sheet metal shaping and metal-finishing. In late 1951 Gene returned from Japan, and went back to work in the old chicken coop. Business was a little slow in the beginning, but eventually friends found out that Gene was back, and work started filling up.When Gene reopened his shop, he decided to change it's name from Windy's Custom Shop to Winfield's Custom Shop. Back in business Gene decided to focus on his business, and wasted no time getting back into racing.[2]

In 1953 Gene got married, and he stopped racing. He started to advertise in newspapers and magazines, and he got so much business that he couldn't handle it in his little shop. He found out that in order to attract a lot of work, it would be smart to move his business in to a larger city. He looked at Sacramento, San Jose, and Fresno before he decided to settle for San Jose. He found a shop were he could afford the rent, he purchased a license from the city, and went to the fire marshal for an approval. When the fire marshal found out that Gene was going to do bodywork in the old wood-frame building, he refused to give Gene a permit. Discouraged Gene returned to Modesto where he bought a shop at 452 Tully Road. After 9 years in the chicken house, Gene moved his business in to town in 1955. After Gene left the shop, the building wasn't used for many years. In the 1970s the Winfield family sold the property, and the new owner used the chicken coop for storage.[2]

In January 2011, the old chicken coop was sold to Albert Coito and his brother. At the time, the shop was about to be torn down. When Albert bought the shop they had delayed tearing it down for about a year. Albert jumped on the chance to make an offer in order to save the historical building, and luckily the owners agreed on the offer. The shop wasn't advertised for sale, but Albert knew of the shop still being there and decided to approach the owners of the property. After cleaning the shop up inside, Albert found Gene Winfield's name and the Century Toppers logo in the concrete. He contacted Gene about the shop, and got the full history of the building. Albert would like to see the old coop moved to a museum, but as none of the museums he has contacted has shown any interest, Albert and his brother are going to try to number each board and take it down piece by piece and have it moved to a small ranch owned by Albert's brother. He has a couple Hot Rods that he would like to have stored inside the old shop.[3]

Please get in touch with us at mail@kustomrama.com if you have additional information or photos to share about 1309 Figaro Avenue.