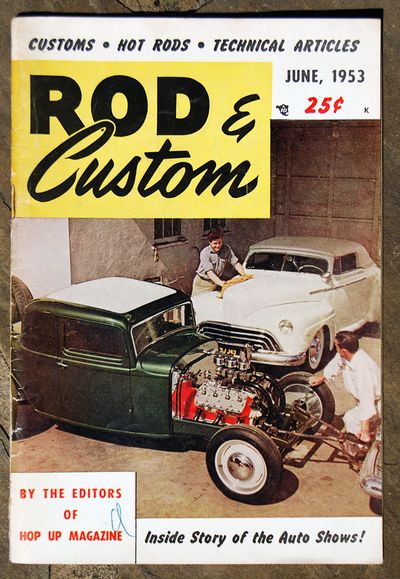 Al's Ford was featured on the cover of Rod & Custom June 1953, along with Lew Thompson's 1932 Ford Coupe. The photo shoot took place right after the 1953 National Roadster Show. 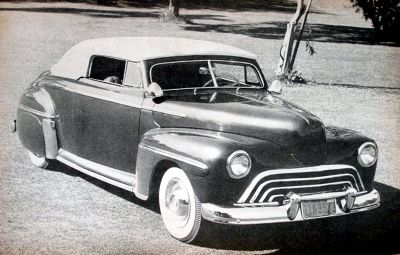 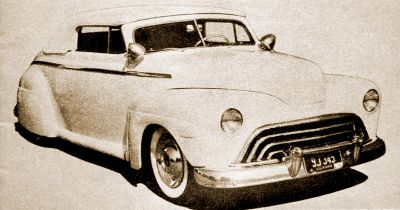 Alvin Serpa's 1946 Ford was the first car Gene Winfield did extensive custom bodywork on. When Alvin first brought his 1946 Ford Convertible to Gene Winfield, the top had been chopped by someone else in Turlock, California. Alvin wasn't satisfied with the chop, and asked Gene to chop it a little more. Gene also removed the rear quarter windows that came on post war Ford convertibles, since Al preferred the prewar '41 and '42 look without quarter windows.

Gene also frenched the headlights of the car, and he fit it with a grille from a 1946 Oldsmobile. He molded the front of the hood, and removed the raised portion. Al fitted the car with bumpers and guards from a 1949 Mercury that were narrowed to fit the width of the car. Handmade plastic lenses were put in the bullet portion of the rear guards as taillights. The side trim of Serpa's car came from a 1947 Ford. The box type fender skirts were taken from a 1941 Mercury. Al also had Appleton 112 spotlights installed on the car. Once completed the car was painted green and fit with a padded top from Hall Upholstery in Oakland, California.

In 1953, Al's Ford won its class at the National Roadster Show in Oakland, California. After the show, someone from Rod & Custom magazine contacted Al and fellow club member Lew Thompson about a photo shoot. Lew had won his class at the same show with his 1932 Ford 5 Window Coupe. Al was working on the day of the shoot, so Gene picked up his car. They met at the 76 service station where Lew worked for the shoot. One of the photos taken that day became the cover for the second issue of Rod & Custom Magazine.[1]

The car was later repainted in white.

Al sold the car to fellow club member Kenny Gardner. After Kenny sold the car, it eventually ended up in Springfield, Missouri.[1]

Please get in touch with us at mail@kustomrama.com if you have additional information or photos to share about Alvin Serpa's 1946 Ford.