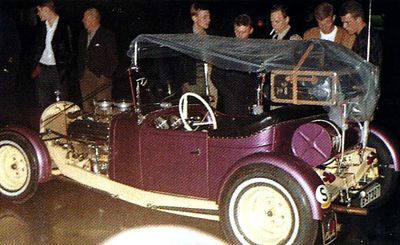 Palle prepared to start the trip 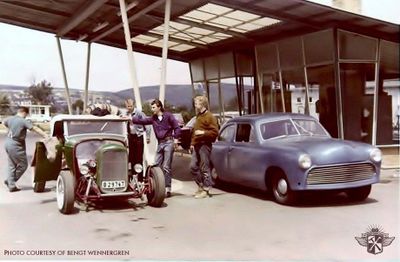 Bengt's Ford next to Lars Erik Ljungkvist's 1932 Ford Roadster during the roadtrip to Italy in 1964. Photo from The Bengt Wennergren Photo Collection. 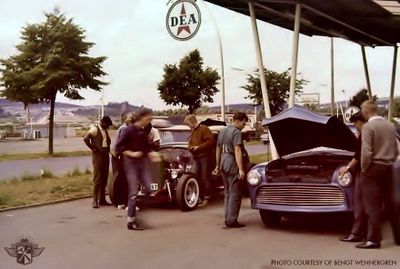 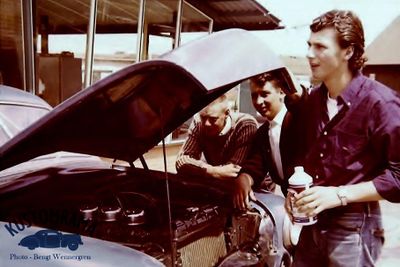 Bengt with a can of oil during a pit stop in Italy. Curious Italian teenagers are admiring the Swedish Metalflaked custom. Photo from The Bengt Wennergren Photo Collection. 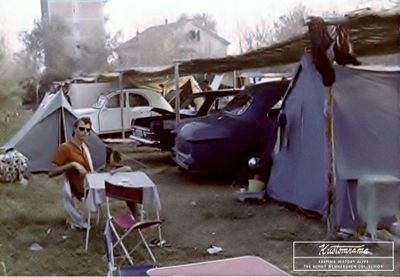 A rear end shot of Bengt's Ford from the trip to Italy. Photo from The Bengt Wennergren Photo Collection.

We are not sure how it all started, but some guys from the Stockholm area decided in 1964 to test out their cars on a longer trip.
The target was through Europe down to Rimini in Italy.


Most of the cars were newly built so this was a brave task to perform. Eight cars started from a gas station in Kungens kurva heading south on a rainy night;

Some episodes is on film in the "Flammor, Asfalt, Nagellack" production.


According to Bengt Wennergren his engine ran perfect all the way, and he remembers that it didn't use any oil at all. He got a bad noise in the drive-shaft though, and he had to replace one of the u-joints at a French garage using Ford Vedette parts.


In Freiburg, "Junken" broke his gearbox and traded his car for a Ford Sunliner. In the film you can see "Junken" remove the rear fenders on the -32 and throw them into some bushes!
The engine in the Sunliner also broke so the gang should swap engine in the car. [1]


Inge Ellburg broke his car somewhere on the way. He could get an Opel Rekord instead to continue the trip.


Another story from Bengt is that they camped on a hill somewhere in Germany. Palle was not quite sober so he wanted someone to take care of his car keys.
Palle came back after a while and wanted his keys back as a friend of him (a colored man he just met) should drive down to the local town.
He got the keys and the colored man started to drive backwards and hit into something. Palle got angry and drove himself to the town.
In a roundabout he didn't turn but went straight over, damaged the car and the engine got loose. The police came and Palle went to jail for a couple of days. Rumours also tell
he managed to bribe the local police and got to Monaco by plane as he was forbidden to drive his car in Germany! [2]


Maud Sandberg, the wife of Sven Sandberg has many memories to tell. Maud and Sven had driven earlier down to France (where the family had a house).
They drove down in Sven Sandberg's 1956 Ford purple custom car. Together was Lasse "Gringo" Johansson and Göran Silfors in Gunnar Johansson's 1932 Ford, owned by Bo Sandberg.


They all met up at the popular camping area at Cap d'Ail between Nice and Monaco and had real fun together.

Please get in touch with us at mail@kustomrama.com if you have additional information or photos to share about Trip to Italy.