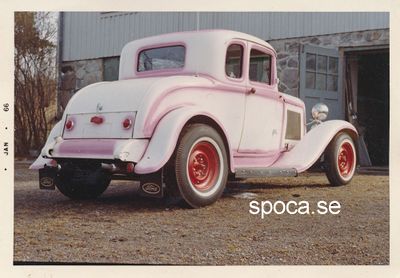 A photo of Gunnar's coupe. This is the same photo that was used in the souvenir program for the 1965 Hot Rod Show. Photo courtesy of Sven and Maud Sandberg, from Spoca.se. 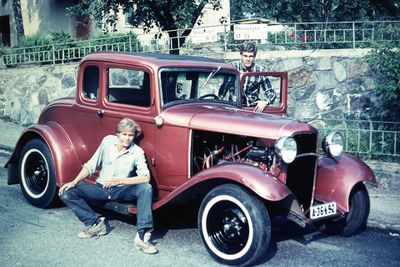 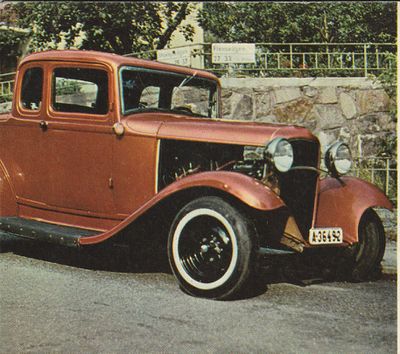 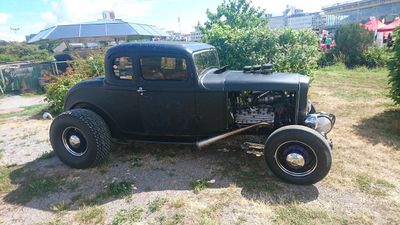 From 2018. Photo by Mats Wallander

This 1932 Ford Five Window Coupe was found at a yard on Värmdö by Janne Bellander in 1958. Janne bought it for 200:- but sold it soon to Peter Billing at Lidingö for 300:-!
As Peter already had a 1932 cab, his brother Göran took over the car. Together they put a 265" Chevy between the rails connected via an adapter to a 1939 Ford gearbox.
Stopping power was provided by 1947 Ford brakes. With black painted fenders and original red painted body the car could hit the street.
So this was one of the first Hot Rods 1959 in Sweden equipped with an overhead valve engine. Unfortunately, no pictures have been found from this period.

Next owner 1961 was Hasse Källman. He was able to keep and tune the car at Barkarby flygfottilj where he did his military service. When this period was over, he took it to his parents cottage in Tyresö where he and a buddy painted it white with purple shading, new 16" wheels with Moon caps, etc.


Unfortenately, Swedish police didn't like the car and harassed Hasse a lot, leading to selling the car to Bosse 'Gamen' Sandberg in 1963.[1]


In 1965 the car was shown at the first annual Hot Rod Show in Stockholm.[2]
Bosse also showed the car at Hot Rod Show 1966 Marmorhallarna equipped with Chrome reverse wheels and an improved paint job.


Summer 1966 the car got a new copper metallic paint and was driven on a holiday trip to the French Riviera by Tummen and Göran 'Sillen' Silfors.
After that, it was sold to Tommy Wikman in Bromma who exchanged the engine to a newer 327" and re-painted in green metallic by Ola Nigell.

More owners over the years

1972, the car was owned a period by Alf Jakobsson in Norrköping but went back to Stockholm and Stefan Bergqvist in Farsta. Again, the car is re-painted in silver metallic with black fenders. New interior upholstery by famous Tore Ström.
The car was shown and awarded at Hot Rod Show 1976 Marmorhallarna and two years later at Hot Rod Show 1978 Sollentunamässan. [3]


Around 1978 the car changed owner again, to Anders 'Walle' Wallin in Årsta. "Walle" mounted a 3" dropped Superbell tube axle, but kept the original steering box and split V-member. New plans appeared for "Walle" so later that year it was sold to Magnus Jansson in Linköping (without engine).

Magnus Jansson in Linköping immediately started to modify it. The top was chopped and he installed a 100 hp flathead from 1946, prepared by Lasse Andersson in Vikbolandet. To set the traditional look the car was painted solid blue with red steel wheels and Moon hubcaps.

Since October 1982 the car is owned by Perry Ahlgren in Stockholm. He had just sold his Oldsmobile 1958 and was looking for a traditional Hot Rod. Big credits to Perry to share all history facts of the car!


One of the first wise things Perry did to the car was to mount a 4-link to the tube front axle, and a Mustang steerbox. After that the engine got a small overhaul with a hi-rise manifold, two Strombergs etc. The car was displayed at Hot Rod Show 1983.
Between 1986 and 1992 the car went through a total rebuild including frame reinforcement, Halibrand Quickchange rear end etc. When the car hit the streets again, Perry realized more power was needed. The block was bored and also stroked using a Mercury crankshaft. A rare Cyclone manifold together with three progessive Stromberg 97 was mounted.


This was obvious not enough for Perry so he managed to get an even rarer Italian-made SCoT roots-type blower. Home made drive pulleys for 2-3 psi charge. Later in 2007 the blower drive ratio changed to get 6-7 psi leading to a breakdown of the old -39 transmission.


A Ford C4 replaced the gearbox and a Ford 9" rearend was installed using K-members instead of the Halibrand. (Which was very noisy in the drivers compartment due to the straight gearwheels).


Perry is a true Hotrodder who really use the car and is not afraid to use the throttle when challenged!


Note: So who the heck is "Gunnar Johansson"? The true amusing story is that Bosse 'Gamen' Sandberg owned several cars at the time, making the tax authorities suspicious. In the program for Hot Rod Show 1965 it looked better with another fictive name as owner of the car ...

Please get in touch with us at mail@kustomrama.com if you have additional information or photos to share about Gunnar Johansson's 1932 Ford.