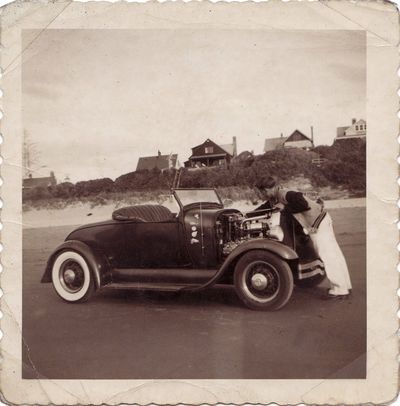 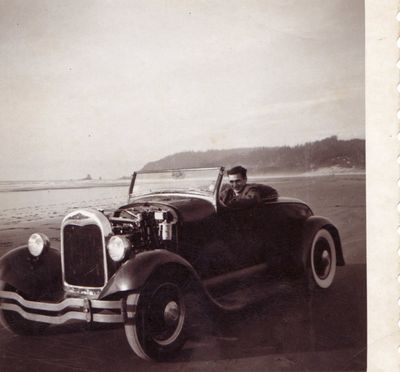 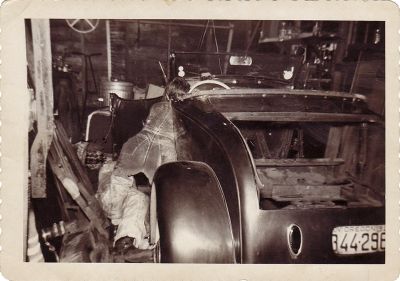 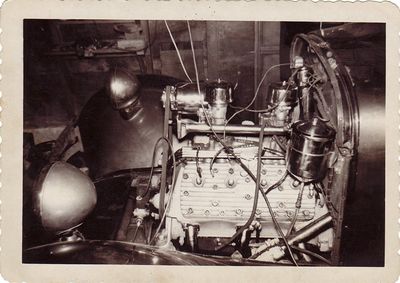 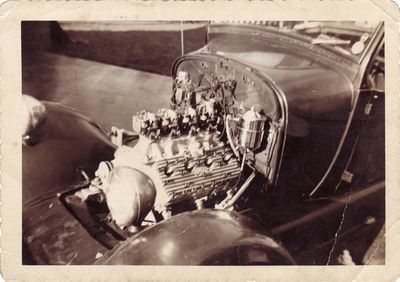 The Schnell 4x2 induction setup installed on the Mercury flathead. 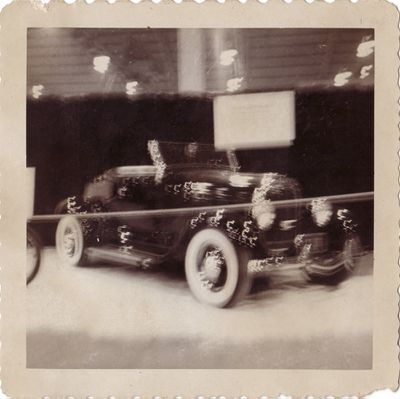 1929 Ford Model A Roadster owned and restyled by Pacers of Portland member Thor Sanden of Portland, Oregon. Thor's Model A V8 roadster was originally built and owned by a friend and fellow high school class mate named "Lefty" Howell in 1946 or 1947. Thor had a dark blue 1938 Plymouth Convertible in high school but after a trip to Los Angeles, California in November 1951 to the "Hot Rod" exhibit at the GM Motorama 1951 Show at the Pan Pacific he just had to have a roadster. Click here to see Thor's photos from the trip. Thor bought Lefty's old roadster in 1952 or 1953 and began making it his own.[1]

Thor turned to the top "hot rod" engine builder in the city of Portland, Bill Schnell Sr, to build up the Merc flathead V8. The end result was a full race 296 ci "stroker" 59 series Merc flathead with Jahns pistons, an Isky full race cam, Edelbrock heads and a Navarro dual carb intake topped with a pair of Stromberg 97s. The Navarro intake was later replaced with a 4 carb full race intake designed and cast by Bill Schnell Sr himself with 4 of the 97s on top. As you can see on the pictures the engine was also equipped with a chromed alternator and a chromed oil filter was mounted on the firewall. The Merc flathead was backed up by a 1939 Ford top loader and a 1940 Ford rear axle with hydraulic brakes on all 4 wheels.[1]

The roadster had a full fendered body with unique features such as a chopped and slanted windshield, filled cowl, fenders, hood and radiator shell as well as "dipped" doors. This was popular in the 1930s and 40s in an attempt to make their cars look more like European "sports cars" of the period. This feature was unique to Thor's car and was the only one with that styling feature that anyone in the early local drag scene remembers. The car also sported independent fender mounted headlights and a 2 inch drop along with its black interior and "metallic plum" paint job. In the rear the car was fit with 1939 Ford taillights, and a recessed license plate.[1]

The fate of Thor's roadster is unknown, but his grandson Clayton Paddison believes that he may have had the roadster as late as the early 1960s when it was apparently dismantled. Thor took the roadster and his 1940 Ford coupe with him when he moved into his new apartment following his discharge from the U.S. Army in 1958. The Schnell 4x2 induction setup and the original Dash from the car survive today in Clayton's possession and will be reinstalled on the replica of the his Grandfather's '29 roadster that he is currently working on.[1]

Please get in touch with us at mail@kustomrama.com if you have additional information or photos to share about Thor Sanden's 1929 Ford.