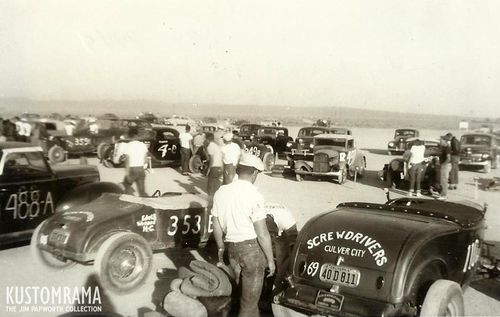 Jim’s roadster and a Screwdrivers '32 roadster at a dry lakes event in 1948 or 1949. Photo courtesy of Jim Papworth. 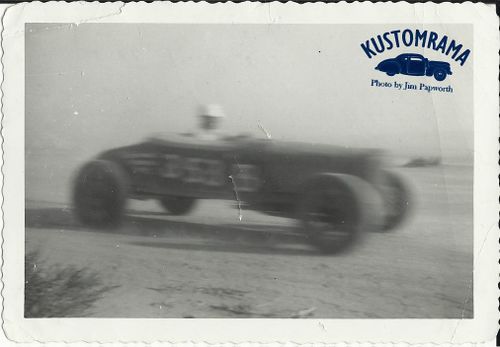 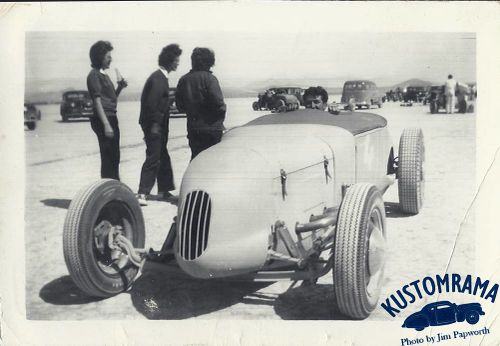 A photo of Ed Olson in Chuck Quesnel's 1927 Ford Model T roadster. Janet Olson is the girl behind the car in the jacket. According to the caption on the back, this photo was taken at a 1950 Rosamond event. Photo courtesy of Jim Papworth. 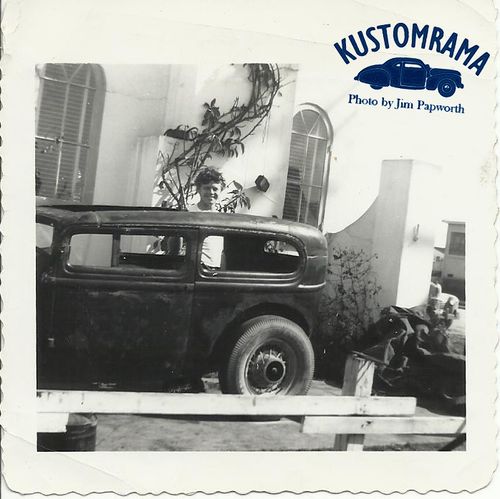 A photo of Jim Papworth working on his 1932 Ford tudor sedan in his driveway. Jim ran the sedan in the B-Class in 1950. It was chopped and fully fit with a belly pan. Photo courtesy of Jim Papworth. 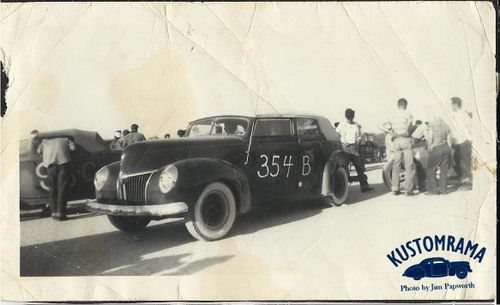 Bob Calahan's 1939 Ford convertible sedan at a dry lakes event. The top has been chopped, and the car has been fit with a padded top. Other modifications includes removed running boards. The number on the doors indicates that the car has been raced at the event as well. Bob was Jim Papworth's partner in the 1932 Ford tudor sedan. Photo courtesy of Jim Papworth. 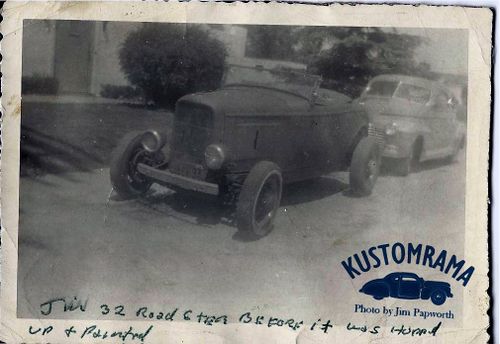 A photo of Jim Papworth's 1932 Ford Roadster. The roadster was Jim's first car, and he bought it in 1947. He ran it without fenders and running boards. The windshield was chopped, and it featured a shortened front bumper. The cowl lights and door were shaved, and headlights from another car were mounted lower down up in the nose. Jim' eventually sold the car and bought a 1932 Ford 3-Window coupe instead. When Jim bought the car, it was powered by an engine that was later than a 1937 Ford, as it had center head water take offs. The car was in gray primer, and Jim told Kustomrama in 2013 that he did nothing to improve it while he owned it. Photo courtesy of Jim Papworth. 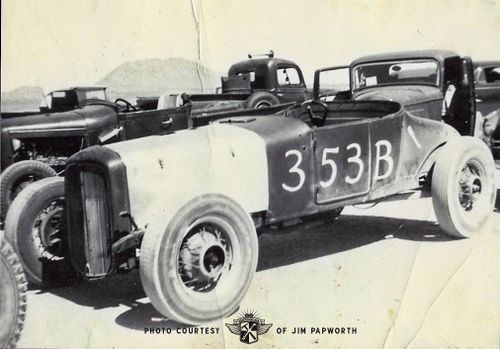 A photo of Jim Papworth's 1927 Ford Model T Roadster. Jim bought the roadster in 1948. It was already channeled when he bought it. It came without an engine and transmission, so he built an engine and a transmission he could use for street racing. Later on he decided to modify it for dry lakes racing. Jim ran the roadster in 1948 and 1949. Top speed in 1949 was 129.56. Photo courtesy of Jim Papworth.

Jim Papworth was a member of the Culver City Screwdrivers. He joined the club in 1948, and was active until the late 1950. Jim's first car was a 1932 Ford highboy roadster that he bought in 1947. It was in gray primer, and Jim did nothing to improve it. Jim's next car was a 1932 Ford 3-Window coupe. It had no fenders and a dropped axle, making it hard to handle at fifty and above, so he sold it and bought a channeled 1927 Ford Model T Roadster in 1948. The car came without an engine and transmission, so he built an engine and transmission he could use for street racing, a big deal at the time. Later on he decided to modify it for dry lakes racing. Jim ran the roadster in 1948 and 1949. Top speed in 1949 was 129.56. After the Model T followed another 1932 Ford, as Jim bought a 1932 Ford two door sedan. The car came stock off the showroom floor. Jim's last car a 1934 Ford 5-Window coupe that he bought in 1950. He pulled the engine out of the Model T roadster and installed it in the coupe. He had Sandy Belond build headers for the coupe, as it was his date car.[1]

Please get in touch with us at mail@kustomrama.com if you have additional information or photos to share about The Jim Papworth Photo Collection.