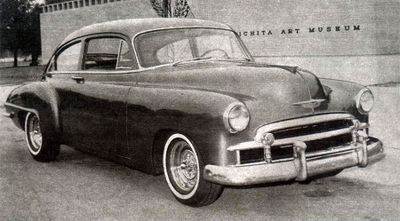 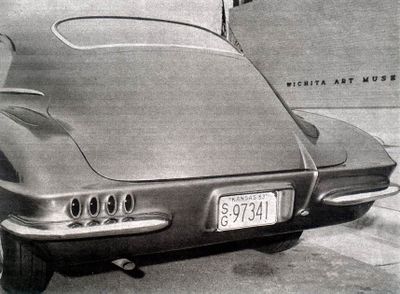 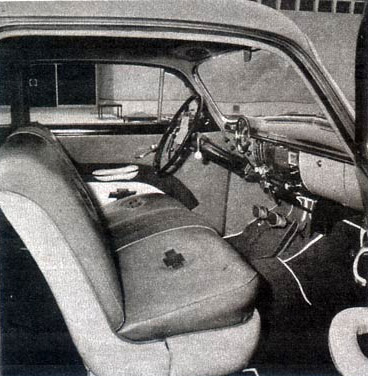 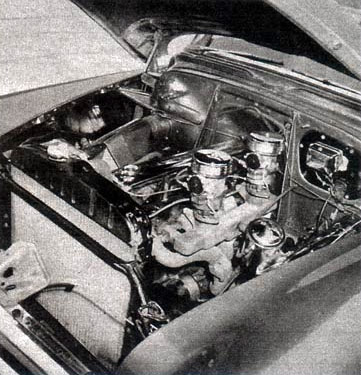 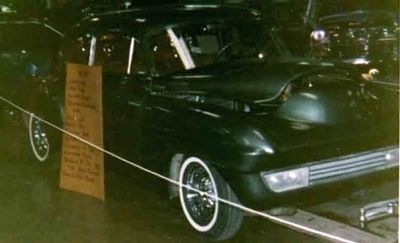 The car as it looked after the front end was restyled. Photo by Dave Stuckey, provided by Carnut.com[1] 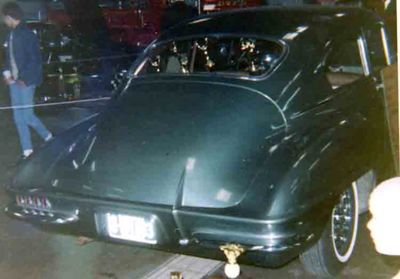 1950 Chevrolet Fleetline restyled by Stuckey Kustom for Ronnie Knepp of Wichita, Kansas. After the car was totaled, Ronnie decided to have it restyled instead of returning it to its original shape. The car was replaced from the quarter panels and forward. The first version of the car, as it appeared in Rod & Custom September 1964 maintained a stock front end, but with a one-piece windshield from a 1950 Oldsmobile. The rear end received asymmetrical styling by installing 4 taillights on the left side of the car. The taillighst were hand formed from Lucite. The car was fit with a rolled rear pan hand formed by Dave Stuckey. Split bumpers from a 1960 Chevrolet Corvette were installed in the rear pan. Small back up ligts were located to the right of the offest licens plate housing. Once the bodywork was done, the Chevy was painted crystal green. Inside the car was upholstered by Paul Mantz in tan and brown Naugahyde. Power came from a 1957 Chevrolet engine that was bored .080 over. The heads were ported and polished, and two Rochester carburetors were mounted on a Fenton manifold.[2]

After the car was featured in Rod & Custom September 1964 the front end of the car was heavily restyled.

Tony Wonsetler of Hutchinson, Kansas owned the car from 1968 to 1970 or 1971. In 2015 he told Kustomrama that he had totaled his 1962 Dodge Polara when his dad found the Chevrolet in Greensberg, Kansas; "He found it in a barn I think he said. I bought it sight unseen, dad drove it to Hutchinson where we lived. The split manifold would rattle the windows, and I rattled a lot of them. I had to sell it to go to school. It was not easy to drive on the highway and the front lights were for looks only, you couldn't see at night more than 20 feet."[3]

Please get in touch with us at mail@kustomrama.com if you have additional information or photos to share about Ronnie Knepp's 1950 Chevrolet.