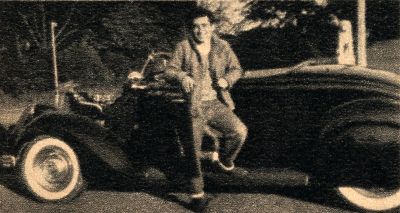 Ron's roadster as it appeared when it was featured in Rods and Customs May 1953.

1935 Ford roadster owned by Seattle Kustom Club member Ron Weiskind of Seattle, Washington. Ron's roadster was fit with fenders, hood and grill from a 1936 Ford. The dash was from a 1940 Ford, and the bumpers were taken from a 1949 Plymouth. Power came from a 1946 Mercury V8 that had been ported and relieved. The bore was 1/4" over stock and the stroke had been increased by 5/16". The engine did also sport big valves, a Winfield 3/4 cam, a Spaulding dual ignition and a chopped flywheel. Zephyr gears were actuated by a column shift, and stopping power came from hydraulic brakes. Ron's roadster was featured in the "our readers' customs..." section in the first ever Rod & Custom magazine, published as Rods and Customs in May 1953.[1] As the first three or four issues of Rod & Custom basically contained unused material from Hop Up magazine, these readers rides also came from Hop Up. This version of the car featured no hood, at least one spotlight, fender skirts and Sombrero type hubcaps.

Please get in touch with us at mail@kustomrama.com if you have additional information or photos to share about Ron Weiskind's 1935 Ford.