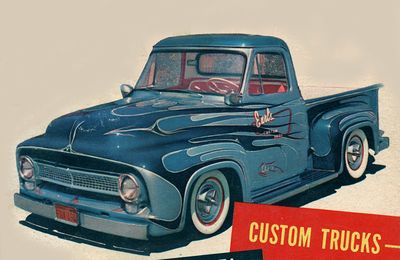 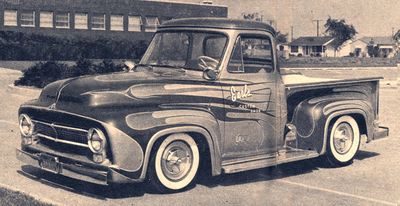 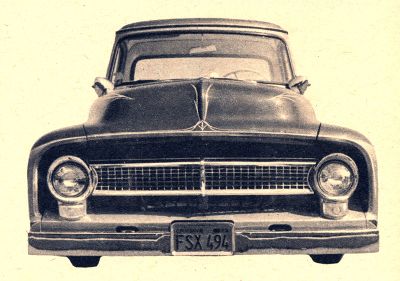 At the Compton Drive-In. Photo by Colin Creitz 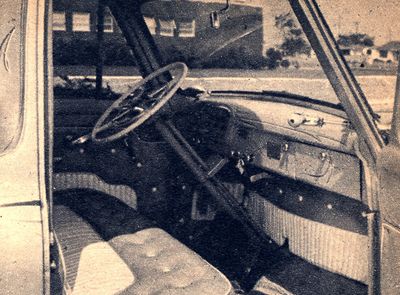 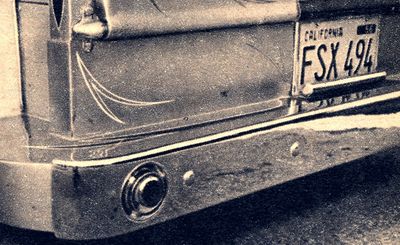 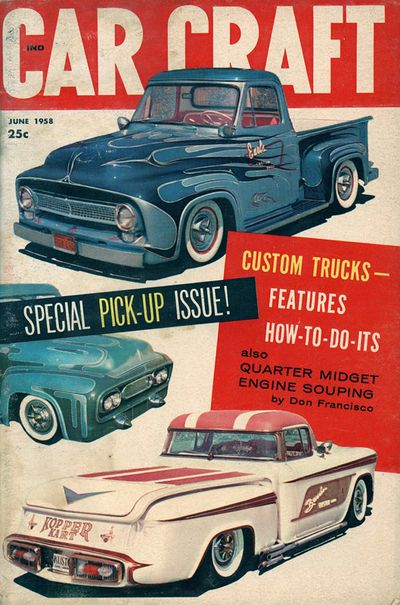 Richard's pickup on the cover of Car Craft June 1958 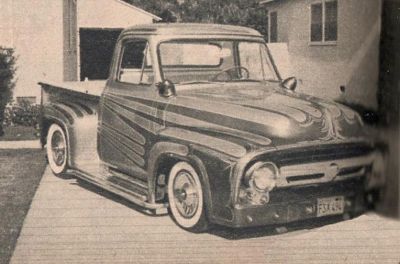 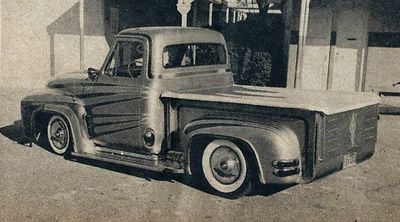 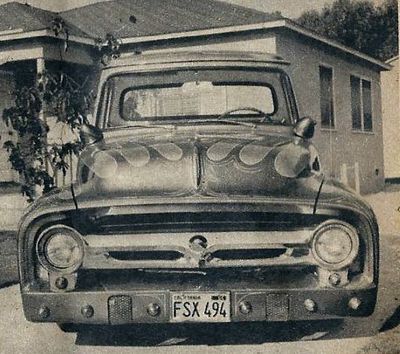 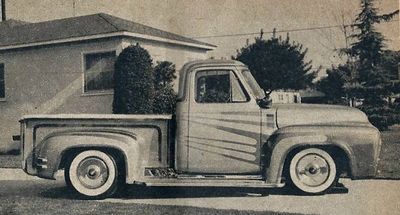 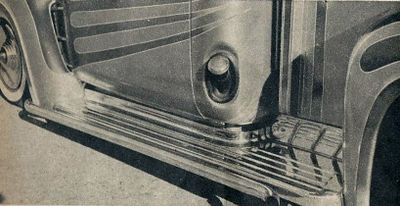 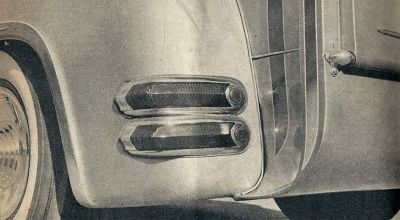 1955 Ford F-100 Pickup restyled by Earl's Custom Shop for Richard Axcell of Lynwood, California.[1] The stock grille was replaced by a 1955 Ford passenger car grille set between 1955 Oldsmobile headlights. The stock front bumper was retained, but the bolt holes were filled. A special built one-piece gravel pan was made to fill the gap between the rear bumper and the bed. Buick portholes were used to route the exhaust through the bumper. 1941 Chrysler taillights were mounted horizontally on the rear fenders. The truck was lowered by dropping the axle and reworking the front spindles. Dearched springs were used in the rear. Richard's truck was painted in a 3-tone blue flame job. Chrome running boards and reworked Buick flippers were also added. The filler panel between the bed and running boards featured Cadillac trim bars. Gaylord's Kustom Shop upholstered the car in tucked and rolled pink and white Naugahyde. The kick panels were also upholstered in the same theme.[2]

By 1959, when the car was featured in Rod & Custom January 1959, it was restyled by Earl's Custom Shop, Barris Kustoms, and Richard himself.[3] The beautiful grille insert was removed and replaced by a stock grille which was combined with the 1955 Oldsmobile headlights and fit with accessory bullet spinners. The bumpers were removed and the lower front panel was fit with dual inserts of expanded metal and six bullet spinners. The exhaust pipes were routed out behind the front wheels and were following the running boards. Air scoops were made in the front fenders and trimmed with three trim teeth. The 1941 Chrysler taillights were removed as well, instead twin 1950 Mercury units were installed on each side.[2] The rear end was rolled by adding a curved pan down from the base of the gate. Eight chrome strips were mounted horizontally on the tailgate to increase apparent width. The body was painted Rust with pink, gold and copper scallops by Dean Jeffries. A new tarp cover was made to harmonize with rest of the exterior with incorporated scallops.[3]

Please get in touch with us at mail@kustomrama.com if you have additional information or photos to share about Richard Axcell's 1955 Ford.