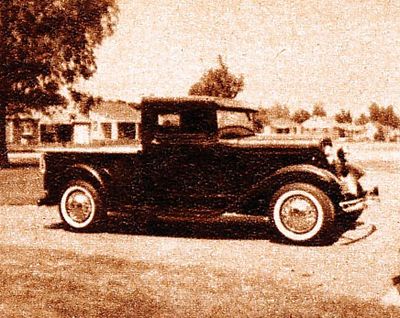 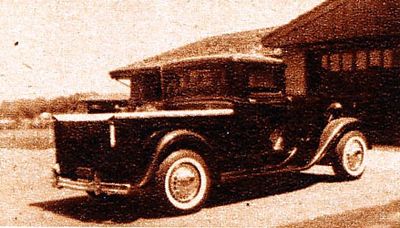 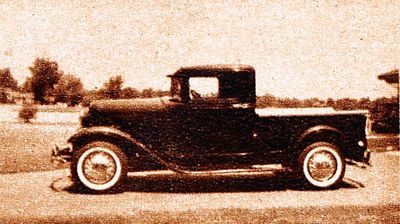 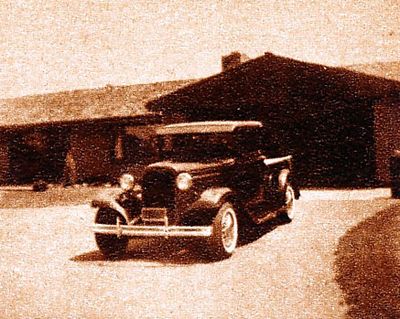 1934 Ford pickup owned and built by R. J. Gross of Englewood, Colorado. R. J. Spent 15 months transforming his worn out Pickup truck to a shining hot rod! The top was chopped 4 inches, and the bed was shortened thirteen. The engine was a 59AB Ford block with Edelbrock heads and three-carb manifold. The camshaft was a Winfield unit, and the crank was stroked 1/4". The block was ported and relieved to add efficiency. The ignition contained a Ford 11-A distributor. It had Belond headers with dual pipes and mufflers. The majority of the running gear hailed from a 1940 Ford, as was the steering wheel. All four wheels were from a 1947 Mercury, fit with 6.00-15 tires. When Gross took the car to the drags, he used 6.50-16 in the rear for better gear ratio. The upholstery was done by Englewood Upholstery Company in gray and white Naugahyde. The floor carpet was gray as well. The body and paint work was carried out by R. J. with the help from Kenny Tanaka of Denver, Colorado. The lacquer paint job was a combination of 1947 Chevrolet maroon with a quantity of Gold Flake.[1]

Please get in touch with us at mail@kustomrama.com if you have additional information or photos to share about R. J. Gross' 1934 Ford.