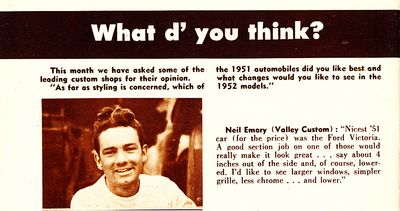 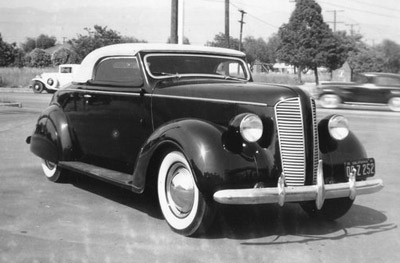 Neil Emory's 1937 Dodge Convertible of Burbank, California, was started in 1940 and completed in 1941. Built in his shop class at Burbank High, Neil kept the car for a couple of years before selling it in 1943. 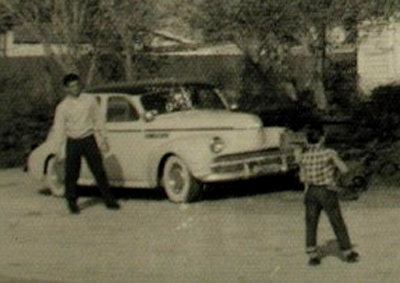 Neil Emory's 1940 Buick Super sedan was restyled around 1949/1950. Being busy running his own shop and raising 3 young boys, Neil could only spend a few hours a week restyling his own cars.

Neil was born in Burbank, California. Growing up, he used to hang around local garages to watch men at work. One of the shops he used to visit was coachbuilder Howard Darrin's shop in Hollywood. He also used to ride his bike over to Pasadena to the Bohman & Schwartz garage. He couldn't get inside these shops, but he peeked through windows and fences. In the 7th grade, Neil took classes in carpentry, metal-working, and auto shop. Before the war, Neil hung out at a garage building midget racers doing gofer chores no one else wanted. The garage was next door to CoachCraft. And that was no accident. The garage had a common wall with CoachCraft, and there was a door between the two, so Neil now had access to the CoachCraft Shop, and could slip in there to watch the masters at work. [1] In his younger days, Neil earned his pennies washing and gassing-up cars for the bigwigs at the Warner Brothers Studio where he sold newspapers. During his high school days, Emory and a buddy ran a gas station where he tinkered with cars for his friends and teachers. During this time he built his first custom, a 1937 Dodge Convertible.[2]

Neil was a member of the Throttle Stompers Auto Club.[1] After graduating, he briefly worked for Douglas Aircraft company before joining the Navy. In 1943 he had a son, Gary, and he decided to sell the Dodge and buy a 1936 Ford 3-Window Coupe. The '36 was stock with wide whites and Hollywood moons with flippers. He was in the Navy customizing his officers' cars and had no time to customize his own cars.[3]

When he returned from the Navy, Neil began to work for a Burbank body shop. The job at the body shop gave Neil all the experience he needed in order to open up his own shop. He became tired of straightening fenders and wanted to reshape them instead, giving the cars fresher more exclusive styling, so in 1948 Neil and his brother-in-law Clayton Jensen opened Valley Custom together. Neil was the body man, while Clayton had mostly mechanical background.[2]

Please get in touch with us at mail@kustomrama.com if you have additional information or photos to share about Neil Emory.