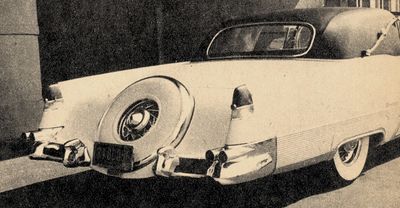 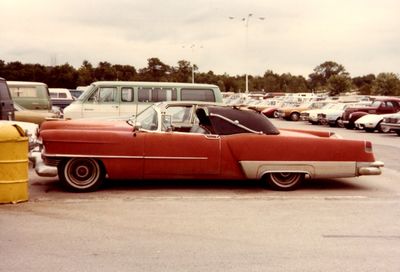 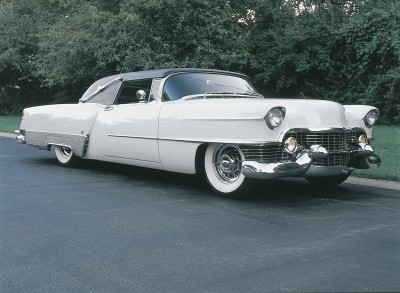 The restored version of the car. 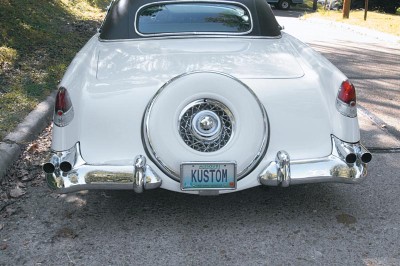 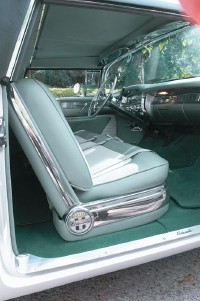 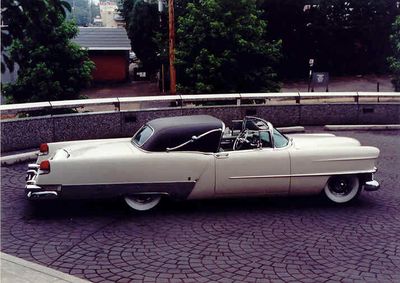 Photo courtesy of Sleds in September. 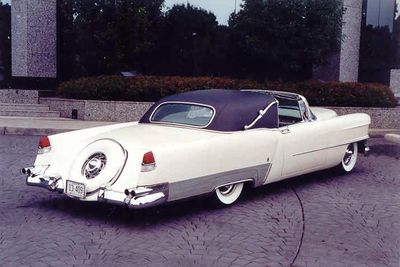 Photo courtesy of Sleds in September.

1954 Cadillac Eldorado restyled by Barris Kustoms for Milton Melton of Beverly Hills, California. In 1954 Milton, a middle aged supermarket executive bought a brand new 1954 Cadillac Eldorado for $5738. He drove it straight away to Barris Kustoms for a custom treatment. The windshield was chopped 1.75 inches. Barris cut down the side windows and fabricated the frames for the vent windows. The upper half of the body was sectioned 3 inches by removing metal from the hood, top of the doors and rear fenders. Integral scoops were made on both sides. The deck lid was reshaped into a pancake style opening. The rear fenders were extended 20 inches and the taillights placed in the fins were sunken into the body. The rear fenders were restyled by adding chrome trimmed air scooped and fabricating 1954 Packard style bulges at the leading edges of the fenders. A continental kit was molded and sunk into the rear below the deck lid opening. Four exhaust pipes were routed through the 1955 Pontiac split bumper. Barris cut down the front seat and added pleated upholsterey to the dash pad.[2]

The car was then sent off to Bohman & Schwartz where it received a two-piece Landau-trimmed top. The top was made by using oak frame covered with sheet metal upholstered with padding. The top was done in "sedanca de ville" style similar to town cars of the early 1900s. The rear half was bolted to the body while the other part was easy to remove. Once complete, Bohman & Schwartz painted the car white. The car made its debut at the 1955 International Motor Review in Los Angeles, where it was a hit with its smooth white body and black-trimmed top and chrome wire wheels.[2]

In 1978, Kurt McCormick found the car listed on Hemmings. He bought it unseen for $2500. The car was not touched untill 1993, when Kurt decided to restore the car back to its former glory. The car was updated with a 1960 Cadillac 390 mill bored up to 396 cubic inches. The upholstery on the dashboard was removed and the car was lowered 2.5 inches.[2]

Please get in touch with us at mail@kustomrama.com if you have additional information or photos to share about Milton Melton's 1954 Cadillac.