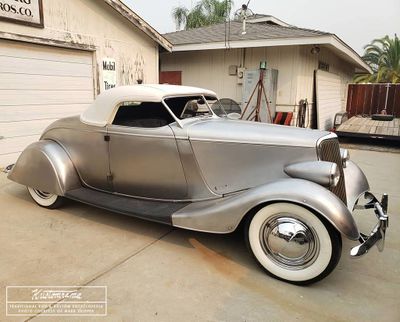 A photo of Wes Collins' 1934 Ford Roadster. The car Mark is recreating. This photo shows the car as it appeared in the souvenir pictorial for the 1950 National Roadster Show. 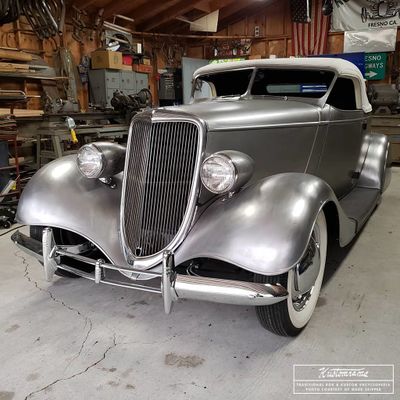 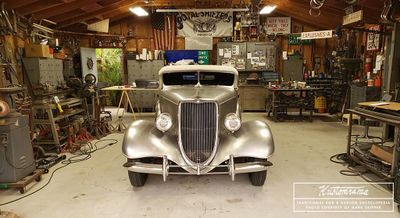 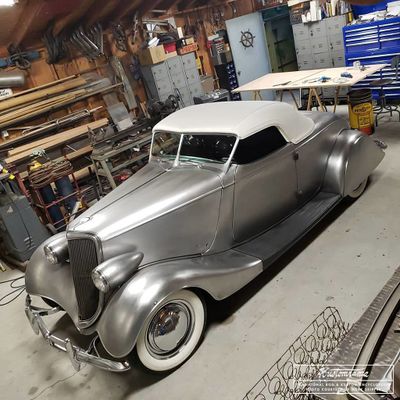 A photo of the roadster taken September 18, 2020. The glass is now mounted in the windshield frame that Mark fabricated. Photo courtesy of Mark Skipper.

1934 Ford Roadster owned and restyled by Royal Shifters President Mark Skipper of Fresno, California. Mark went the custom route with his roadster, turning it into a recreation of Wes Collins' 1934 Ford Roadster. A well known and lost California custom with roots going all the way back to the 1940s.

Mark got the idea for the build after reading The Rodder's Journal 51. Inside that magazine, he saw what he thought was the most perfect pre-war custom. Thinking he would never own a model 40 roadster due to financial reasons, he eventually lost interest in the build. "Then my friend Jason Whipple in 2020 sold me his dad's 34 phaeton," Mark told Sondre Kvipt of Kustomrama, "and BINGO, I am going to sell some other cars and cut this phaeton up and build my Wes Collins roadster." Mark found out that the phaeton was Australian and very rare, so he scrapped the idea and bought a new Steve's Auto Restorations roadster body..."the rest will be history I suppose."

Please get in touch with us at mail@kustomrama.com if you have additional information or photos to share about Mark Skipper's 1934 Ford.