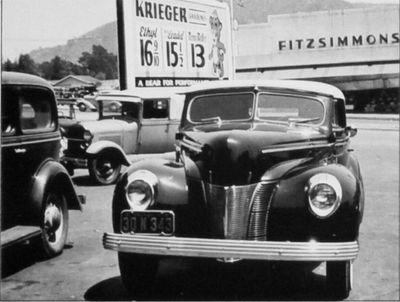 These two photos of Link's Ford was published in Rods and Customs May 1953, the first issue of Rod & Custom Magazine, in a story by Spencer Murray on pre-war customs. 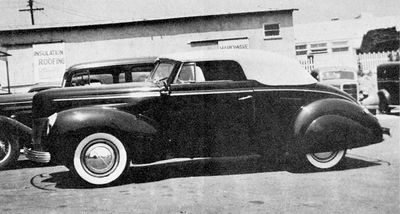 1940 Ford Convertible owned and restyled by Link Paola of Glendale, California. Link bought the car in 1939 when he was working in the body shop of a Ford dealership in Glendale, California. Back then the new models were delivered to dealers before they were released to the public so the dealers had time to arrange showroom layouts and plan the big opening day. The Ford dealer where Link worked got a load of 1940 Ford models about a week or ten days early. One of these was a convertible which Link fell in love with, and he convinced the dealer to sell it to him. He did, and Link began customizing the Ford after the agency closed each night. He was always known as a fast worker and it only took a couple of days to do the metalwork and chop the windshield. In addition to chopping the top, Link nosed and decked the car, removed the running boards and installed ripple bumpers and single bar Flipper Caps. Link also took the car to Carson Top Shop for a padded top. In those days it took about 4 days if you made a reservation. When he got it back he painted it maroon. He finished it up - without the dealer knowing what he'd done - and on the day the '40 models were displayed for the first time Link parked his in front of the agency. Link's car drew a larger crowd then the stock '40s inside and Link was fired right on the spot. After being fired, Link opened up his own shop, Link's Custom Shop, at 3451 No. Verduco Road in Glendale, California. It was located right across from that same Ford agency.[1]

In 1953 two photos of Link's Ford was printed in the first issue of Rod & Custom Magazine, in a story by Spencer Murray about pre-wat customizing. According to the story the car had been restyled early in 1941, Spence has later said that this was wrong, and that the car was restyled late in 1939.

Please get in touch with us at mail@kustomrama.com if you have additional information or photos to share about Link Paola's 1940 Ford.