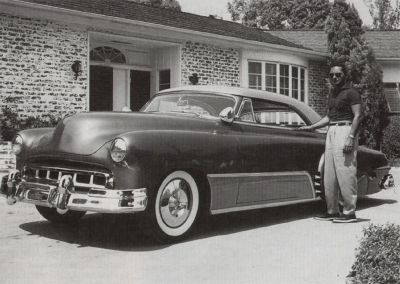 Larry with his 1951 Chevrolet 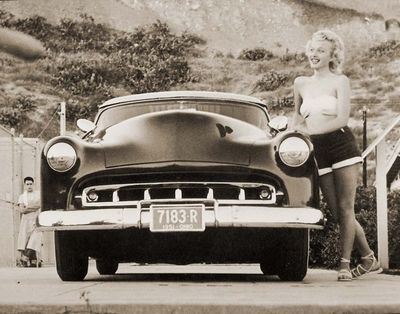 Larry Ernst's 1952 Ford Convertible. Restyled by Clarkaiser Custom Shop, the first version of the car, named "Pharaoh's Pacer", was completed in 1955. Larry was a Roman Catholic priest who later became a monsignor.

Larry was a roman catholic priest of Toledo, Ohio who later became a monsignor. He was known for always being well dressed and articulated. As a priest, owning a radical and famous custom car apparently put him at some odds with senior members of the church. Customs were resembled with youngsters and a wild life style, not a priest in his 40's. Often when his cars was featured in different magazines, he would let his friend in Pharaohs car club pretend to be the owner. And when he was out driving, it was important that the church visitors did not see him.[1] As the story goes, Ernst was asked to park his cars around the block from the Catholic Charities Mission in Toledo, Ohio where he worked so it would not offend members of the congregation or make it seem he lived a better life than he should.[2]

Larry had a burning passion for customs and car design. He even had family relations in Fisher Body. With such genes, it's not strange why Larry designed his own cars and let different custom builder make his sketches to life. Larry kept his passion for fine automobiles all his life, even though his work had a higher priority. His last car was a Pontiac Grand Am, raked with wide wheels. He managed to live long enough to see both his Barris built 1951 Chevrolet and his 1952 Ford restored to the way he owned them.[1]

A near friend of Larry was Harry Bradley. When Larry laid on his deathbed, Harry showed him a drawing of his old Chevrolet surrounded with clouds.[1]

Please get in touch with us at mail@kustomrama.com if you have additional information or photos to share about Lawrence J. Ernst.