From Kustomrama
(Redirected from Klas and Fredrik Wallin's 1932 Ford)
Jump to: navigation, search 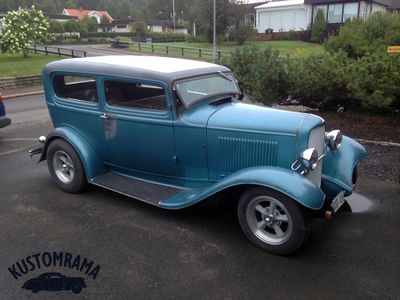 The Ford as it sat in 2013, when Klas and Fredrik bought it. Photo courtesy of Fredrik Wallin. 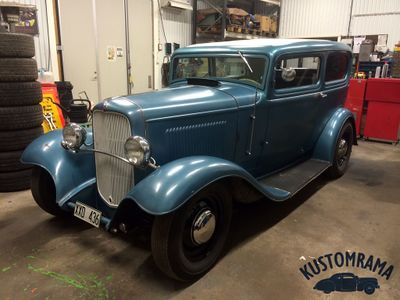 Klas and Fredrik replaced the old American Racing wheels with a set of 16 inch steelies that they fit with Firestone tires. This gave the car a brand new appearance. Photo courtesy of Fredrik Wallin. 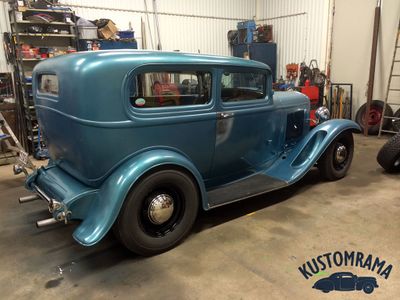 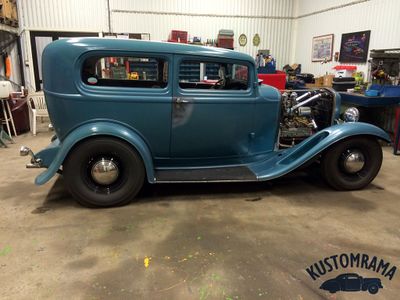 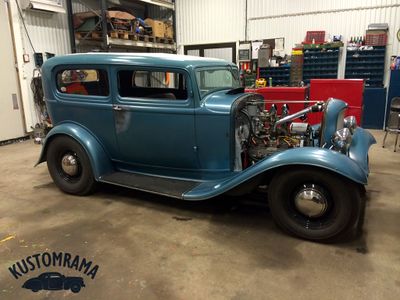 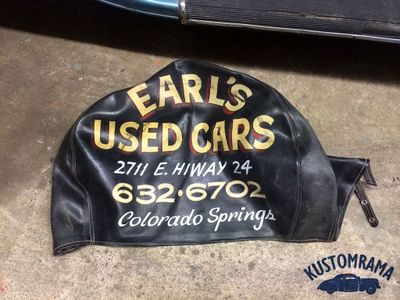 The spare wheel tire cover that sat on the car when Klas and Fredrik bought it. Photo courtesy of Fredrik Wallin. 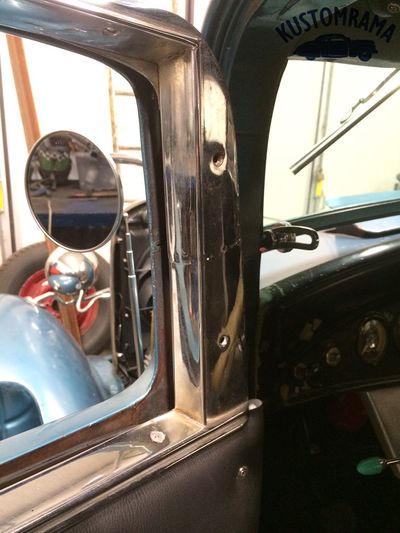 The old welds from the chop can be seen under the window frames. Photo courtesy of Fredrik Wallin. 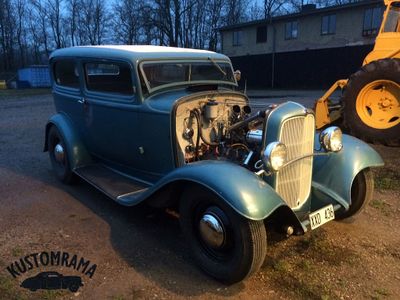 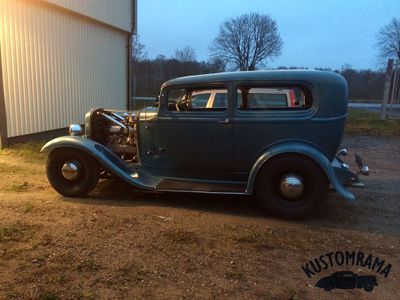 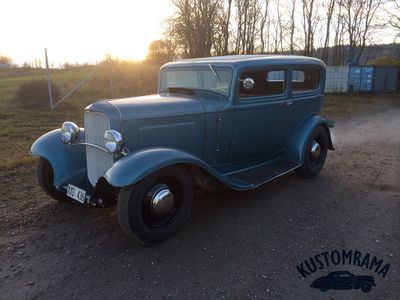 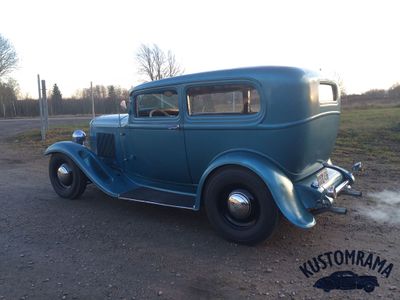 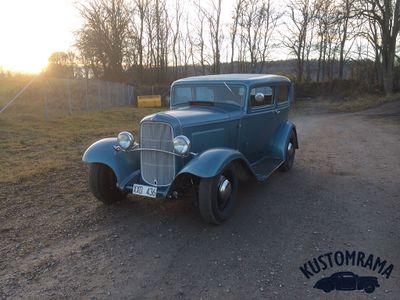 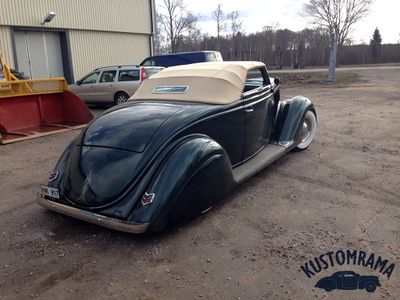 In 2013 Klas and Fredrik traded the '32 for a street rodded 1936 Ford cabriolet. The '36 came with a hight tech modern Corvette engine, and the father and son duo decided to turn it into a traditional custom. The '36 build was completed in the Summer of 2014. Photo courtesy of Fredrik Wallin. 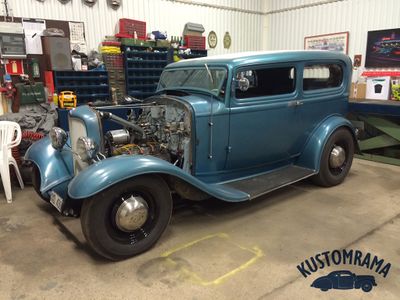 Klas and Fredrik old the '36 in the autumn of 2014 so they could buy the tudor back. This photo shows it after they fit it with 1947 Mercury hubcaps. Photo courtesy of Fredrik Wallin. 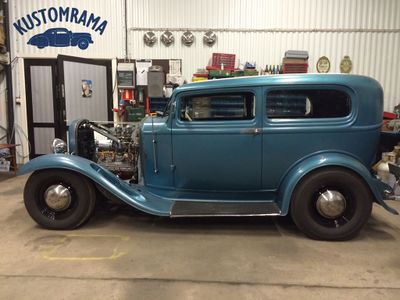 1932 Ford tudor sedan owned by Earl Bailey of Colorado Springs, Colorado. In 2015 Dave Pareso told Kustomrama that he remembered the car from when he moved to Colorado Springs in the 1960s; "It sat up here at Bailys Auto Lot. It was gone for years before I found it parked in the garage of the son that owned the car lot."[1] It ended up at Pikes Peak Motors, where J.R. Ballinger of Colorado Springs bought it. The door handles were shaved when J.R. got the car, so he decided to put them back on. He also replaced the 3 speed transmission and the Lincoln rear end with a 1966 Ford Bronco rear end and a Chevrolet S-10 transmission.[2]

J.R. Ballinger ended up selling the car to a guy from Grums in Sweden. When he sold it, it ran older American Racing Torq Thrust wheels. In 2013 Klas and Fredrik Wallin of Falköping, Sweden bought the tudor as a father-son hot rod. When Klas and Fredrik bought the car, they were told that it had been built in the US in 1957. Back then, the car had been chopped and hopped up with a Flathead V-8 engine. When Fredrik and his father got the car, it had a spare-wheel on the front fender. The wheel had a cover that said "Earl's Used Cars - Colorado Springs". It came with a 1946 Ford flathead engine that was hopped up featuring Edelbrock heads and an Eddie Meyer intake with two Stromberg 97 carburetors. The engine was hooked to a 4-speed transmission and an Oldsmobile rear end. Smaller chromed headlights were installed on a dropped original headlight bar. The top was chopped around 3 inches, and a 4 inch dropped axle gave the car a forward rake. 1940 Ford brakes provided stopping power. Inside, it featured Stewart-Warner gauges and a shiftknob from an old Indian motorcycle. It ran the older American Racing wheels that J.R. Ballinger had replaced, but these were quickly replaced with a set of 16 inch steelies that they fit with Firestone tires.[3]

Later on the same year, Fredrik and his father received an offer to trade the tudor for a 1936 Ford cabriolet that a friend had. They agreed to trade. The '36 had been built as a street rod, and it came with a hight tech modern Corvette engine, so the father and son duo decided to turn it into a traditional custom. The '36 build was completed in the Summer of 2014. They always missed the '32, so they sold the '36 in the autumn of 2014, and bought the '32 back. Back in Wallin's possession, the tudor was fit with a set of 1947 Mercury hubcaps.[3]

When Fredrik Wallin started to drive the tudor, he was told that the car was once owned by Dean Moon. This was an unconfirmed rumor, so he contacted Kustomrama for assistance. Fredrik knew the car came from Colorado, but not much more, so we ran it in the Kustomrama Lost and Found section. It didn't take many days before Dave Pareso got in touch with us. Trough Dave we were able to get in touch with former owner J.R. Ballinger. J.R. told us that when he cleaned out the car he found old receipts from California; "The gas station the receipts came from was located on the same street as the old Moon Speed Shop. The son of Earl also stated that his dad had some old tire covers that said Moon Speed Shop on them. The gas price was less than a quarter gallon." Based on this we believe the car came from California. We are still researching the history of the car, so if you have any info to share about this old hot rod, please get in touch with us at mail@kustomrama.com.

Please get in touch with us at mail@kustomrama.com if you have additional information or photos to share about Earl Bailey's 1932 Ford.