From Kustomrama
(Redirected from American Racing)
Jump to: navigation, search 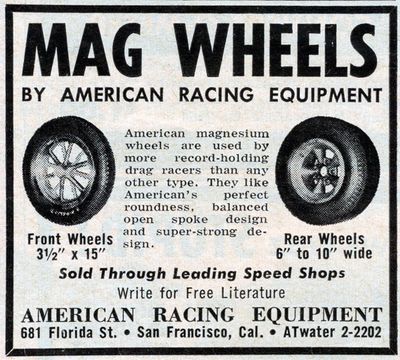 An early ad for "Mag Wheels by American Racing Equipment" from Hot Rod Magazine August 1960. The first wheels were only available as 14" magnesium wheels. 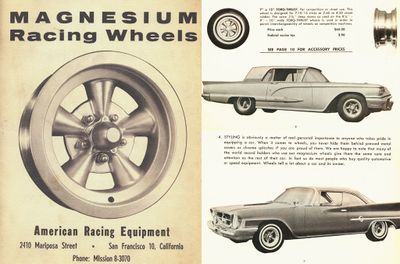 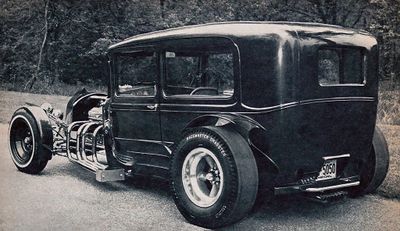 Back in 1963, when Bob Hagerty built his 1931 Ford Model A Tudor Sedan, he ordered a pair of Torq-Thrust wheels for the rear of the car. "I can't remember how much they cost. I bet it took every dime I could save," he told Kustomrama in 2020. The wheels ran M&H Blackwall piecrust slicks. Click here to check price and availability for the same wheels on Amazon.com.

By 1962 Torq-Thrust wheels had started popping up on the streets, and a couple of hot rods and customs running American mags attended the 1962 Grand National Roadster Show. The first Torq-Thrust wheels were only available as 14” wheels, and in 1962 a magnesium 7" x 15" Torq-Thrust wheel for competition or street use can be found in American Racing Equipment catalog for "Magnesium Racing Wheels." Designed for 7.10/15 slicks or 7.60 to 8.20 street rubber, the wheels were priced at $65.00 each.

Aluminum wheels for the mass market

As the popularity of the Torq-Thrust wheel increased, Palamides and Ellison followed up with a lower cost aluminum version of their wheel. A good alternative to have for the mass market. Since then, the iconic wheel has rolled on to become one of the most popular brand names throughout time, and Hot Rod Magazine even named the Torq Thrust wheel itself "One of the top 20 speed parts that changed the world." The one-piece cast wheel was very suitable for the drag race market, and shortly after, a variety of models quickly hit the market. Baja, Libre, 200S (known as the “Daisy” and infamous from the cult movie Two Lane Blacktop), Silverstone, and Vector.

The best wheels on the market

Keith Christensen recalls American Racing as a wonderful company that had one of the best quality control wheels on the market. "The machining, drilling of lug holes and valve stem holes was held to the highest standards of quality. To own a set of American Racing wheels was indeed a feather in your hat, as they were expensive. People, quite often, would take them out and have them fully polished, a labor-intense process, but then you were "top turkey". Everyone would ooh and aah when they saw those wheels on your car."[1]

Please get in touch with us at mail@kustomrama.com if you have additional information or photos to share about American Racing Equipment.