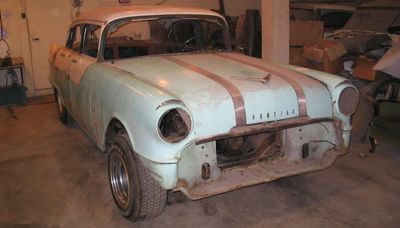 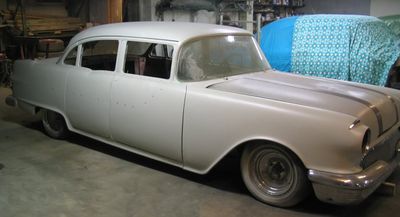 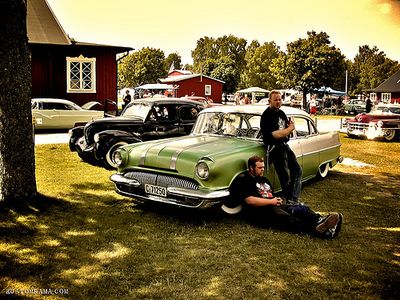 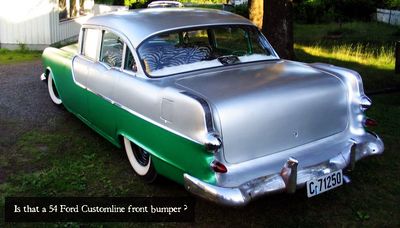 The Mad Marsian next to the car that would become Ole Kristian Espeland's 1956 Ford. 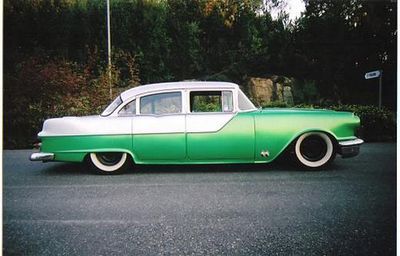 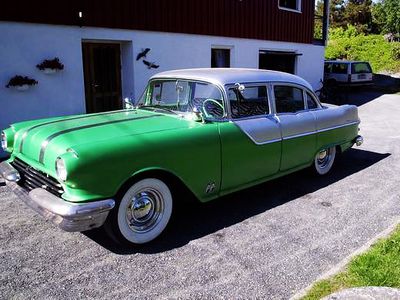 As it appeared on AutoDB for the first time in 2006. 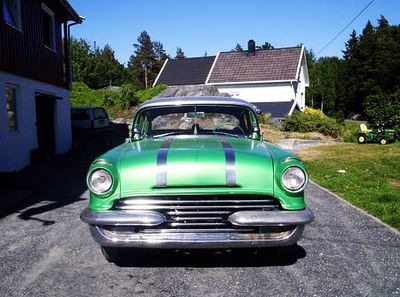 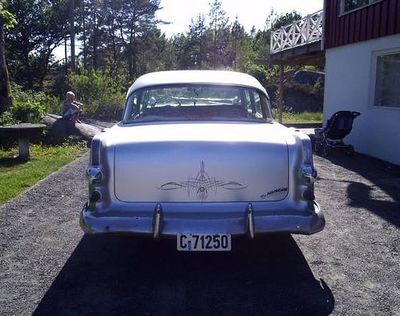 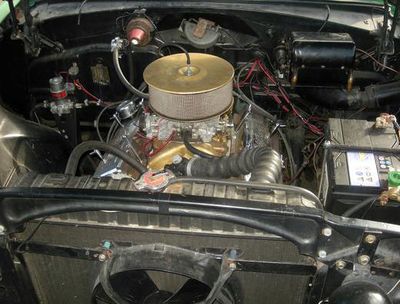 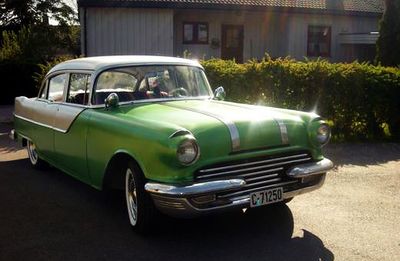 From the second time it was advertised on AutoDB, in 2009. 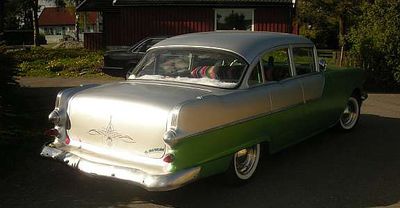 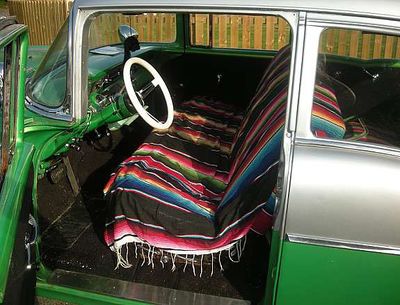 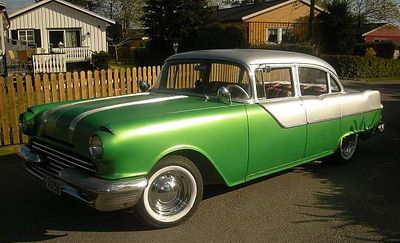 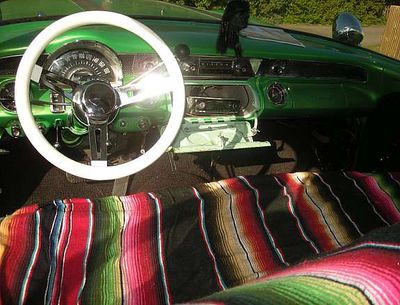 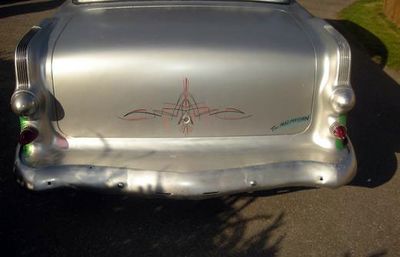 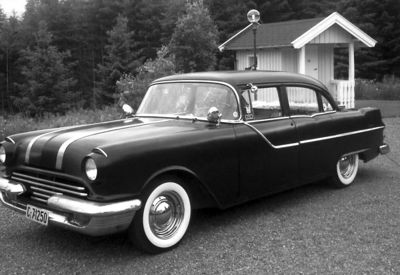 As it appeared when Morten Nygård advertised it on AutoDB July 2012. 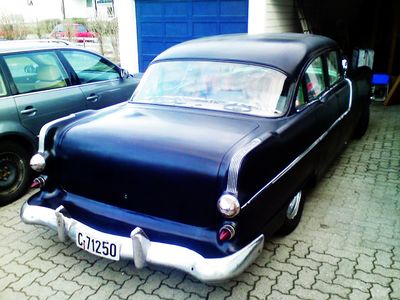 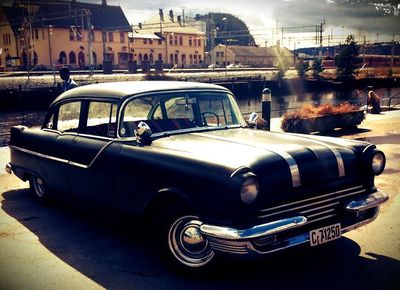 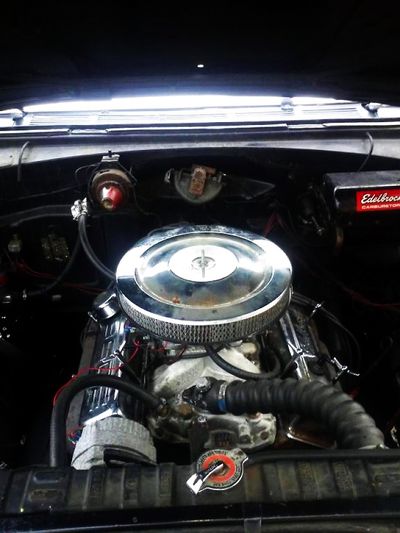 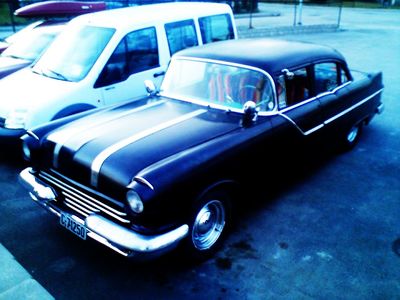 1955 Pontiac Chieftain restyled by Coupe Devils member Kjetil Kvipt of Sandefjord, Norway. The car was registered for the first time in Norway on March 22nd, 1968. Kjetil bought the car for 5000 norwegian kr. The only reason why he bought the car was because he needed its rear bumper for his 1953 Ford. The car was in bits and pieces when Kjetil bought it. Kjetil and his brother Sondre Kvipt spent a whole day assembling it before they could move it. Kjetil managed to give the car a new chance. He lowered the car by installing 4 inch lowering blocks and new springs. The headlights and grille shell were frenched. The stock grille was replaced with grille bars from a 1954 Buick. The hood was shaved for its ornament and peaked. The body was decked and shaved for door handles. The taillights were replaced by chrome bullets, and he inserted 1959 Cadillac tailights were the back-up lights were originally located. The rear bumper was replaced by a front bumper from a 1953 Ford Customline. The interior was re-upholstered with zebra skin. The car sported its stock engine. The car was sold in 2003 for 60 000 kroner.[1]

The car was for sale on AutoDB in 2006. The 1954 Buick grille was replaced by a tubular grille, and the bias-ply was swapped for a set of radials on chrome reverse rims. The stock Pontiac engine was no longer there as well, however, a Chevrolet 305 hooked to a 350 transmission was installed. Dummy-spots were added as well. It was for sale on AutoDB once again, in 2009. The car had not changed much since last time, except for the Zebra interior, which was replaced by a black velvet upholstery. By 2011, the car had been painted flat black.[2]

Morten Nygård of Rindebu bought the car in 2012. He bought a set of new bias-ply tires, and used it as his daily-driver. Morten advertised it on AutoDB on July 23, 2012. The asking price was 70 000 norwegian kroner. It it does not get sold, Morten is planning on painting it green and silver as it was in its hay-days, or just paint the top purple with flake. However, it got sold in September.[3]

Please get in touch with us at mail@kustomrama.com if you have additional information or photos to share about Kjetil Kvipt's 1955 Pontiac.