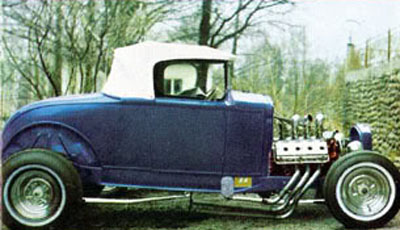 Jonas' roadster as it appeared on the cover of the souvenir program for the 1965 Hot Rod Show in Stockholm. 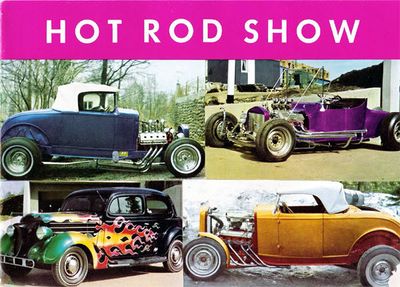 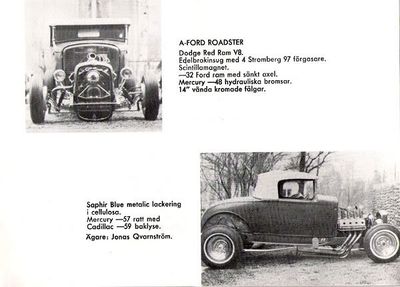 Another photo and some info on the roadster from the 1965 Hot Rod Show program. 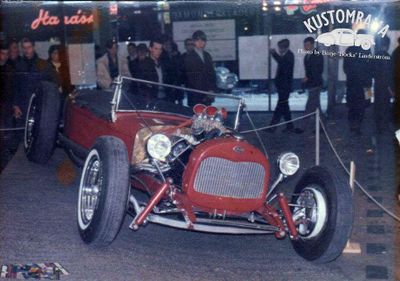 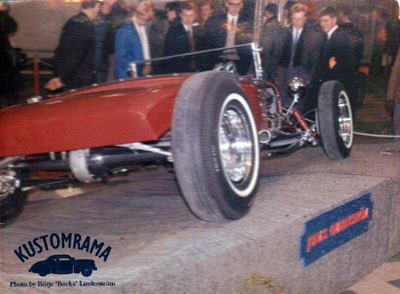 A rear end shot of the Orange Fink from the same show. Photo from The Börje "Böcka" Linderström Photo Collection. 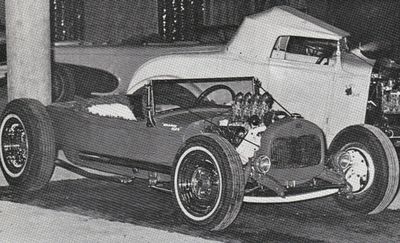 A photo of the Orange FInk next to the Early Bird at an indoor car show in a parking house in Masthugget, Göteborg in October of 1966. Photo courtesy of Start & Speed Magazine.
File:Jonas Qvarnström.jpg
Jonas Qvarnström and Matti Johansson 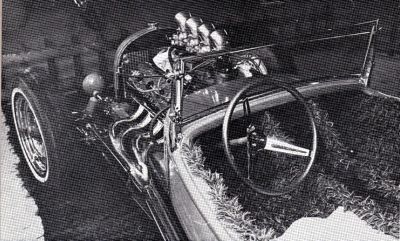 The shaggy interrior was completed the day before this photo was taken. Photo courtesy of Start & Speed Magazine. 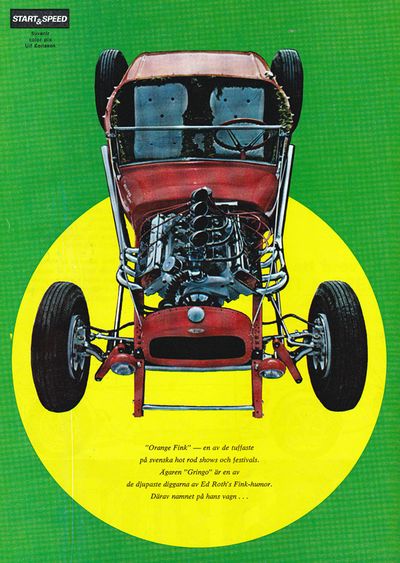 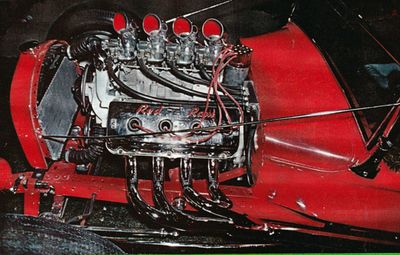 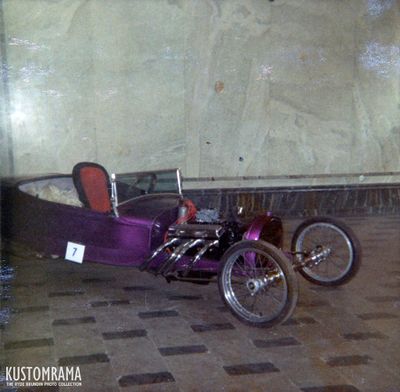 1931 Ford Roadster originally owned and built by Jonas Qvarnström of Sweden. Jonas started the build with a pile of parts that came from several cars from different decades. In 1965, an early version of the roadster was shown at the first Hot Rod Show in Stockholm. Photos printed in the souvenir program from the show, shows the roadster without hood and fenders, installed on a 1932 Ford frame. Painted Saphir blue metallic, Jonas had installed a hopped up Dodge Red Ram Hemi engine in the car featuring a 4-pot Edelbrock intake manifold, four Stromberg 97 carburetors and a Scintilla-Vertex Magneto. A dropped axle lowered the car up front. Hydraulic brakes from a 1948 Mercury had also been installed along with 14" chromed and reversed wheels, a 1957 Mercury steering wheel, a 1932 Ford grille shell, and 1959 Cadillac taillights.[1] According to Start & Speed Nr. 3 1967, the project was sold to Matti Johansson, who continued the transformations by sectioning the body radically. This was not quite the case. In an interview Matti did with Håkan Lindell in 2012, he told Håkan that he never owned the roadster, he just did a lot of work on the car for Jonas.[2] During the sectioning, the firewall was narrowed. The under-progress show rod swapped hands before it was completed, and Jonas sold it Lars-Erik Johansson of Stockholm in 1966. Lars-Erik, also known as "Gringo", completed the build, and transformed the old roadster into a creation known as the "Orange Fink". After Lars-Erik got the car, he redid the cockpit in order to make the radical roadster comfortable to drive.[3]
The car later was teared down and pieces spread to different owners.

In 1966 the Orange Fink was show at the Hot Rod Show in Stockholm. A tarp covered the cockpit on the car at the show, as the interior was not done yet.

In 1967 the Orange Fink was featured in Start & Speed Nr. 3 1967. The photos used in the story were taken at the 1966 Masthugget Hot Rod Festival, held October 26-30 at BP Bilpark Masthugget in Gothenburg, Sweden. According to the magazine, the engine was a 241 Dodge Red Ram V-8 engine. The engine had been painted white, but it was still fit with four Stromberg carburetors, chromed and painted air-intake scoops, and a Scintilla-Vertex Magneto. The monster of an engine was hooked to the stock 1932 Ford transmission. In order to lower the car, the 1932 Ford frame had been kicked up 6-8 inches in the rear. A sectioned grille-shell from a Model A Ford replaced the 1932 Ford grille that Jonas ran on it. Future plans at the time included a more radical engine, a 1955 Ford rear-end, and a Model A rear spring. Hydraulic brakes from a 1947 Ford had been installed at the time. Up front, Lars-Erik wanted to replace the 1932 Ford axle with a tube axle. He had also plans for more modern Volvo disc brakes. The reworked cockpit was upholstered in moss-green long-haired rugs. The seats were white and black bucket seats. A centre-console featured three gauges, a tachometer, an oil-pressure gauge and a water-temperature gauge. According to Start & Speed Nr. 3 1967, the Orange Fink was the lowest show rod of Sweden at the time. Gringo was a huge fan of Ed Roth, something the name of the car reflected.

Please get in touch with us at mail@kustomrama.com if you have additional information or photos to share about Lars-Erik Johansson's 1931 Ford.