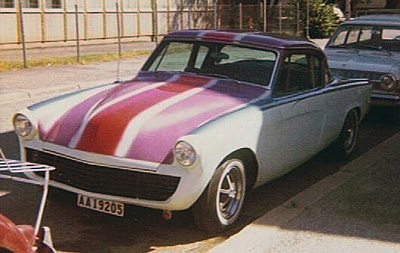 Håkan Lindell's 1953 Studebaker. Håkan began customizing the Studebaker in 1964. The build was completed in 1967.

Håkan Lindell was born March 11, 1948 in Stockholm, Sweden. In 1956/1957 he moved to Ventura, California with his mother. Around 1963/1964 he bought his first car, a 1947 Pontiac four door for 4.00 USD. In June of 1964 Håkan moved back to Sweden. He moved in next door to Hans Broberg in Enskedefältet in Stockholm, Sweden. Hans, an active hot rodder at the time, introduced Håkan to many Swedish hot rod and custom builders in the Stockholm area. Later on in 1964 Håkan bought his first car in Sweden from Hans, a 1953 Studebaker.[1]

Håkan met his coming wife Eva at a party in 1965. He enrolled at carpenter school, and started to customize his Studebaker the same year. While working on the Studebaker, he also bought his first everyday driver, a VW. Håkan spent his days in Sweden having fun, attending hot rod shows and helping other people with their custom jobs. Håkan and his buddy Einar Siim even helped Bosse "Gamen" Sandberg customize his Jaguar E-type. It didn't take long before Håkan started trading cars back and forth, owning cars such as a Volvo, a 1953 Chevrolet 2 door, a 1961 MG, a 1957 Chevrolet, a 1961 Lincoln Premier, a 1956 Ford Crown Victoria, and a 1958 special fiberglass body sports car. In 1968 Håkan and Eva moved to Västerås, Sweden with Einar Siim. Einar brought his 1961 Chrysler 300G Convertible, while Håkan and Eva brought the customized Studebaker. Einar's 300G was said to be the 300G that Greta Garbo gave her boyfriend. The same year he bought a 1966 Opel Rally that he used as an everyday driver. The Opel was traded for a 1963 Dodge GT in 1970. In 1971 he moved on to Norrköping where he took over Old Champ Pub and Restaurant. In Norrköping Håkan bought a mint 1967 Chevrolet Caprice two-door hardtop. In 1973 he moved back to Stockholm, and a Volvo Duett was bought and used as a moving van. On the second night in Stockholm the Caprice was stolen. The insurance money was then spent on a 1965 Ford Mustang fastback. After the Mustang followd a 1968 Chevrolet Camaro convertible, a 1971 Ford Mustang Boss 351 H-O and a 1973 Pontiac Trans-Am with a really souped up motor. In 1975 Håkan opened up a garage and paint shop named American V-8. After opening up the shop he built a custom 1965 fastback. In 1977 he went to California. In California he bought three 1959 Chevrolet El Camino's and a 1958 Ford Ranchero that he imported to Sweden, painted and sold. In 1978 he started going to Keiserlautern in Germany with his firends Pierre and Peter to buy vehicles from US based soliders.[1]

In 1980 Håkan and Eva and their son Ronney moved to California. In California they bought a 1957 Ford Thunderbird and a 1929 Ford Model A Roadster. The following year Håkan bought a 1963 Chevrolet Impala SS convertible to Eva as a Christmas present. They also bought a limousine for fun. Since then they have owned several limousines, as they opened up a limousine-company called Eva's Limousine Service. In 1986 the Model A roadster, the Thunderbird and the Impala were sold so Eva and Håkan could buy their first house. Since then they have had several cars such as a chopped 1934 Ford 5-Window coupe, a 1955 Ford Crown Victoria glass top, a 1964 Chevrolet Corvette Stingray, a 1957 Ford Ranchero and many many more. In 2012 they still owned several of the cars. Some were restored, and some were being restored.[1]

Please get in touch with us at mail@kustomrama.com if you have additional information or photos to share about Håkan Lindell.