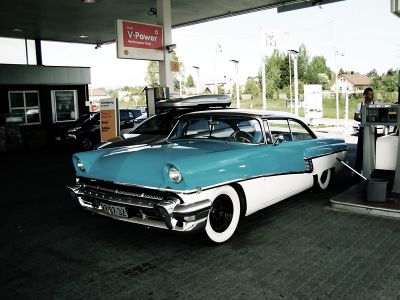 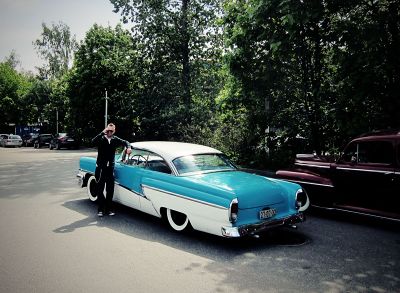 Jon with his Merc, on the way to the third annual Coupe Devils Rod & Kustom Bonanza. Notice the Firestone 7.10-15 with slimmer with walls. Photo by Olav Kvipt 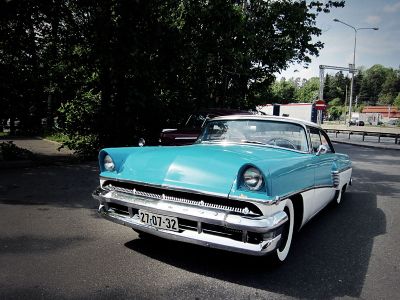 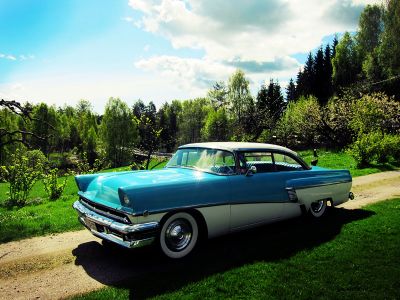 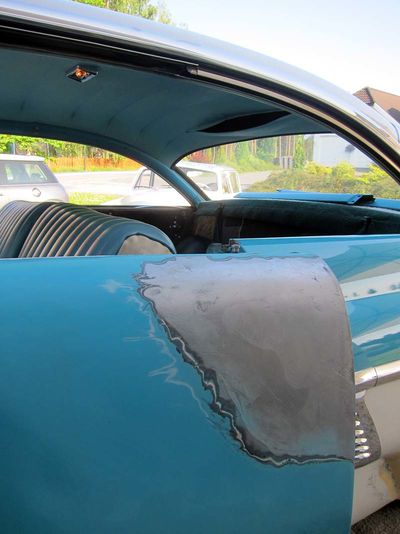 July 2013, Jon Hegnastykket and Olav Kvipt redid the custom work by only using lead instead of bondo. Photo by Olav Kvipt. 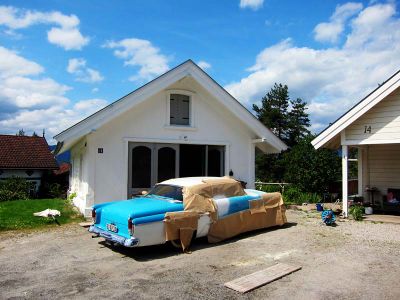 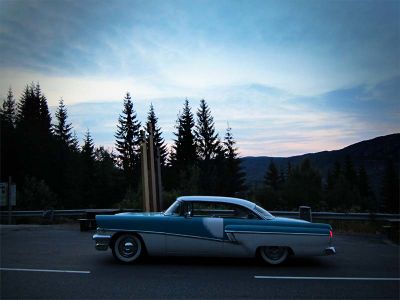 Olav driving home to Fyresdal on sunday to finish the bodywork. Photo by Olav Kvipt. 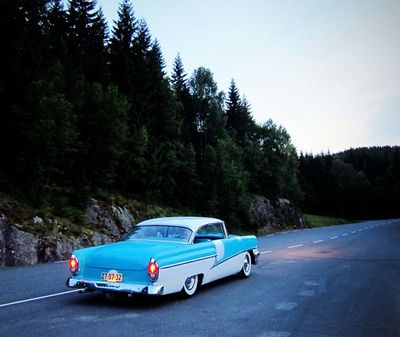 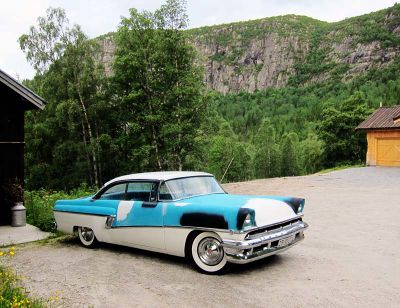 At the Kvipt Ranch, tuesday morning, July 9th, 2013. Most of the bugs cleared out. Photo by Olav Kvipt. 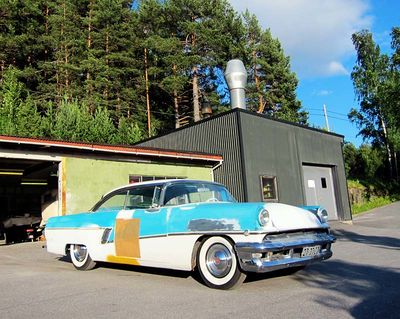 Tuesday evening at Momrak Verkstad, all the bugs cleared out. Photo by Olav Kvipt. 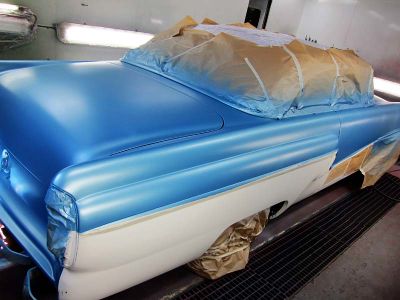 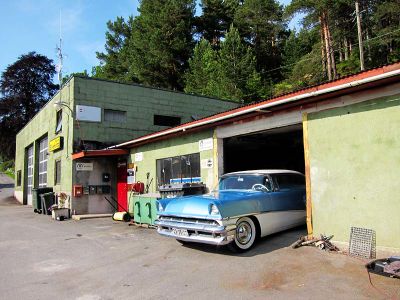 Wednesday evening, July 10th, assembled and ready to deliver it back to Jon. Photo by Olav Kvipt. 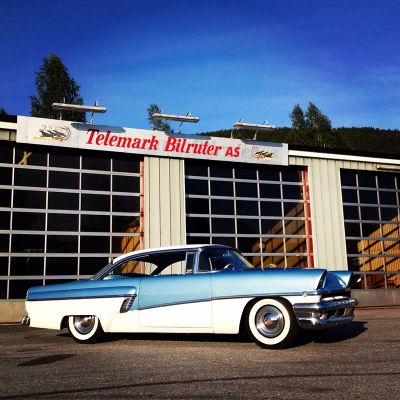 In front of Telemark Bilruter AS, Vrådal, Telemark. Photo by Olav Kvipt. 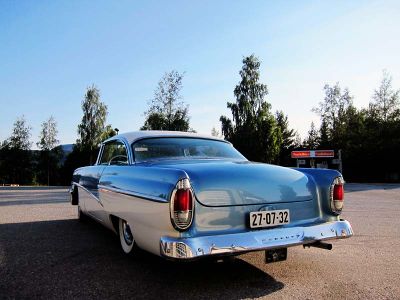 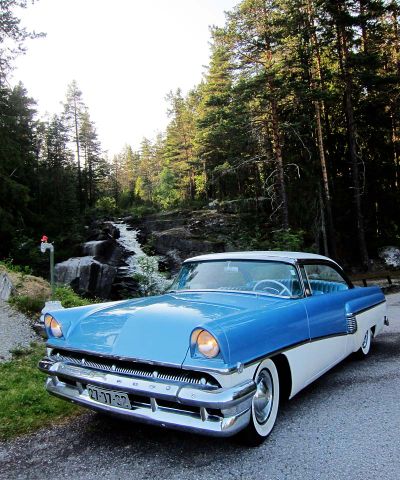 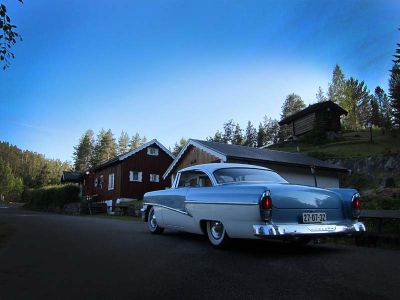 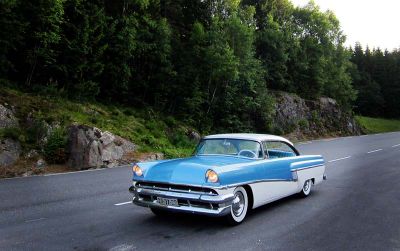 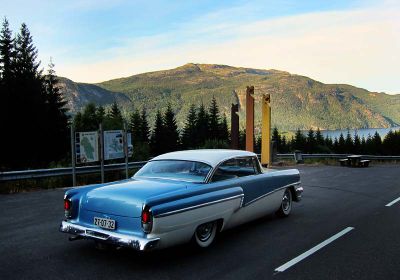 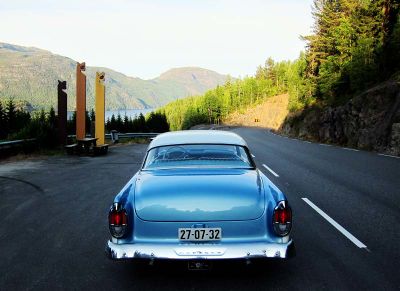 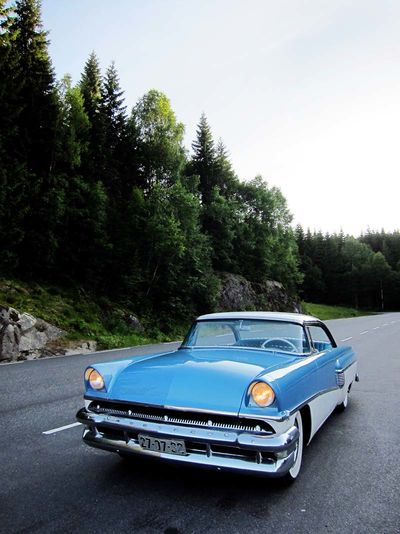 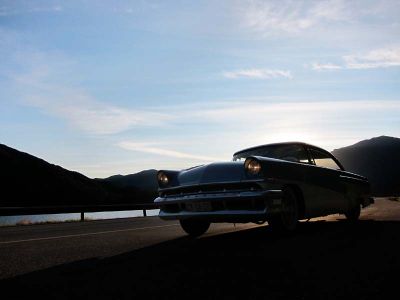 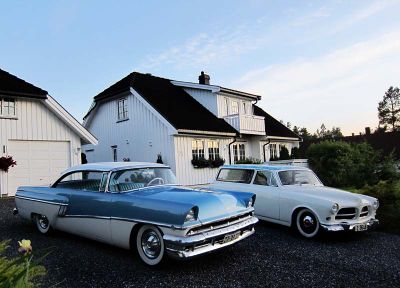 Next to Olav Kvipt's 1967 Volvo Amazon. Photo by Olav Kvipt. 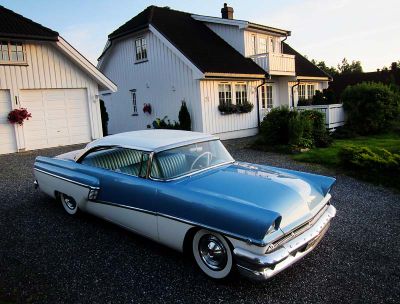 1956 Mercury Monterey 2-door hardtop owned and restyled by Coupe Devils member Jon Hegnastykket of Bø i Telemark, Norway. The Merc was sold new in Florida where it remained until the mid 1980's, when it was imported to Oppland, Norway. It was original painted dark blue, with turquoise and white upholstery, but it was given a new two-tone paint job sometime before it came to Norway in 1988. The car was is a very nice condition, with freshly upholstered seats when it came to Norway. It was put in storage in 1989. Coincidentally in 2008, one of Jon's neighbor worked with the guy who owned the Merc. Jon asked if it was for sale, and so it was. He went to see it, and bought it immediately. After 20-year in storage, the car had not taken any damage from it since it was a warm storage, with little moisture.

The first summer, Jon lowered it by installing lowering blocks in the rear and cutting the coils up front. He had laying around a set of Firestone 7.00-15 tires with wide white walls which was intended to use on his 46' Buick, he installed these and used it throughout the season. By the spring of 2009, Jon had nosed, decked and removed the door handles and emblems from the car. Unfortunately, the starter gave up before the first annual Coupe Devils Rod & Kustom Bonanza.[1]

In 2011, it hit the streets with fresh Firestone 7.10-15 tires, 1956 Packard hubcaps and a new exhaust system. Jon did not like the big bumper guards, so he removed them and installed a grille from a 1956 Mercury Medalist. In 2012, Jon painted the steering wheel white.[1]

On friday, July 6th 2013, Olav Kvipt spent the weekend at Jon's place. They were curious about tinkering with lead, and wanted to try it out. Jon had shaved the door handles, nosed, decked and removed the emblems on the Merc once before, but used bondo. They found each grinder and removed the bondo and filler, then the duo redid the custom work the following saturday with lead. The stainless steel protectors located in front of the rear wheel openings were removed, along with the driver's mirror. When it was time to paint it on saturday, Kjetil Kvipt stopped by and suggested to repaint the whole car instead of spot painting it. Olav was working at Momrak Verkstad at the time and offered to drive the car home to his place and clear out rest of the bugs and rust after work, and paint it when finished. He drove it home the following sunday, and sanded it down on monday, fixing paint chips, waves, cracks and rust along with Jon. On tuesday, Olav did rest of the sanding and masked it in. On wednesday July 11th after work, Olav gave it a new two tone paint job, consisting of Chevrolet white and Fiat 737 Azzuro Fizzaro Blue. After assembling, he drove it to Bø i Telemark to deliver it back to Jon Hegnastykket. This version of Jon's Mercury made it's debut at the 5th annual Coupe Devils Rod & Kustom Bonanza at Blaker, just outside of Oslo July 13, 2013.

Please get in touch with us at mail@kustomrama.com if you have additional information or photos to share about Jon Hegnastykket's 1956 Mercury.