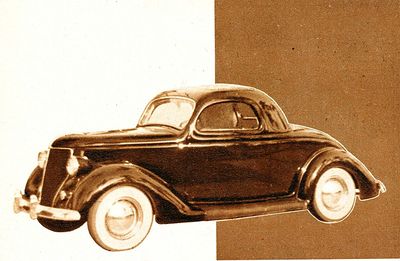 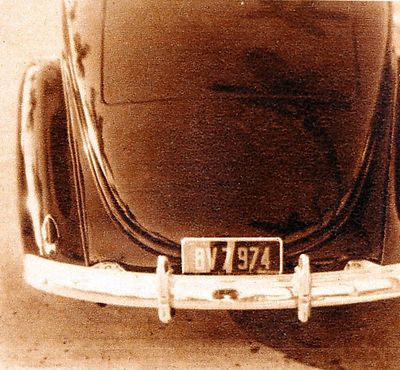 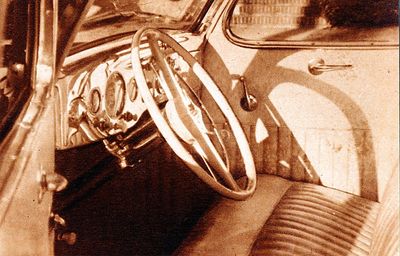 1936 Ford 3-Window restyled and owned by Jim Lewis of Orange, California. Jim was a mechanical student of Institute of Technology in Pasadena, and spent two years making his Ford to become a real eye-catcher. He removed the spare tire cover, and smoothed the rear fenders by relocating the gas filler pipe inside the trunk. The taillights were removed, and 1939 Studebaker President units were installed instead. The door handles were removed, and the doors were electrically operated. Plain hood sides were used as well to achieve a cleaner appearance. The dip-center 36 bumpers were swapped with a set of 1948 Ford bumpers. The bumper brackets were plated as well. The hood nose piece was given a fling out the back door and a smooth one, conforming to the smooth body lines Brownie's Body Shop in Buena Park, California applied a flawless black enamel paint job on the car. Plain disk hubcaps and wheel rings trimmed the car.[1]

Inside the car, the dash, steering column and its support, brackets, and window frames were chromed plated. Jim Berry of Santa Ana, California stitched up a nicely white upholstery. Headliner, package tray behind the seats, firewall, kick panels and even the glove compartment were pleated. A white 1949 Mercury steering wheel really wrapped up the deal.[1]

A 1948 Mercury engine nestled under the hood, with Edelbrock heads, a Weiand dual manifold, and a Winfield 3/4 camshaft. The engine block was ported and relieved for more punch as well, and featured adjustable tappets, Lincoln valve springs, and a Mallory ignition. The engine was fully balanced as well. An Auburn clutch was used, bolted to the 22 lbs flywheel. A transmission from a 1940 Ford was used. The gear ratio was 3.78, and the rear tires were 6.00-16. In order to brake the hot engine, hydraulic brakes from a 1941 were installed. The car made 76mph at the drags, however the most striking part is, it only cost Jim less than $1000 to build![1]

Please get in touch with us at mail@kustomrama.com if you have additional information or photos to share about Jim Lewis' 1936 Ford.