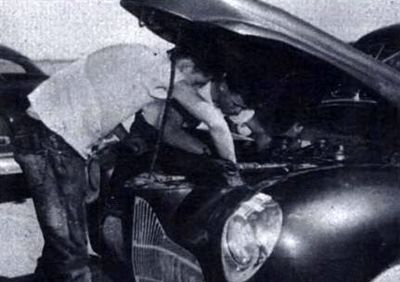 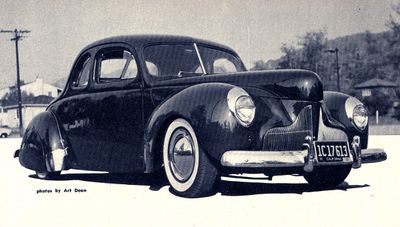 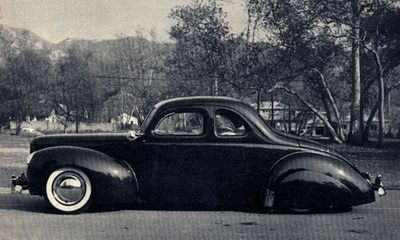 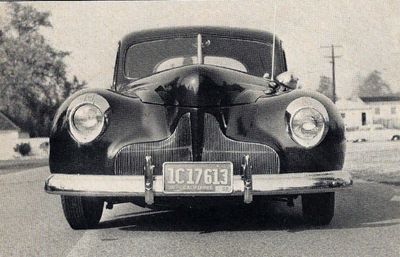 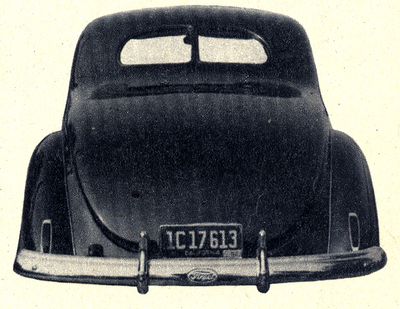 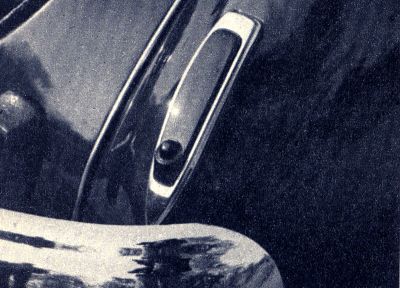 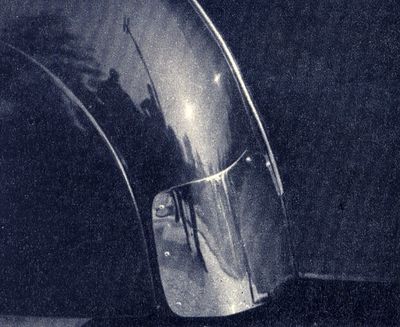 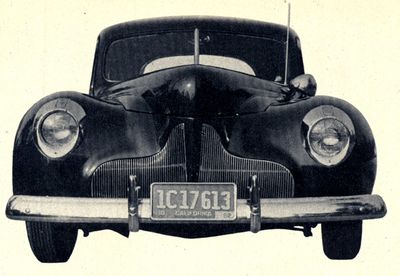 1940 Ford Coupe originally owned by Jim Chapkis of Los Angeles, California. While Jim owned the coupe, it was featured in Hop Up October 1951 and Trend Book 105 Restyle Your Car. In 1953 the coupe was featured in Hop Up again. By then it was owned by Revelle Harrison of Glendale, California, a student at Glendale High.[2] According to the story, Revelle's Ford was channeled 7 inches. Both front and rear fenders were raised. The front fenders were raised about 4 inches, and the rear fenders approximately 3 inches. The front fenders had to be raised in order to give clearance to the front wheels, especially when turning corners. The rear fenders were raised to balance the appearance. After raising the front fenders 4 inches, the hood was sectioned 4 inches. The chrome strip that ran down the center of the hood was removed in the same operation, and the holes were filled and smoothed. The front was altered to fit a 1939 Buick grille, and all seams were molded in. In order to keep seating room the top was kept stock. The chromed side trim and door handles were shaved for a cleaner appearance. The running boards were removed and chrome plated rock guards were mounted on the rear fenders to protect the fenders from dirt and gravel. The guards were hand formed and bolted on to the fenders. Chrome fender beading was inserted between the fenders and body in place of the original fender welt. The fenders skirts were taken from a 1940 Buick Torpedo. The stock taillights were replaced by 1941 Studebaker Champion taillights that were flipped before installation. The deck lid was shaved and the license plate relocated on a bracket behind the rear bumper. Both front and rear bumpers were 1947 Ford units. Once the bodywork was done, the car was painted in a ruby maroon lacquer by Larry Ackley. Rubbed and polished to a sparkling finish the car was accented by whitewall tires and chrome ripple discs. A single spotlight was also mounted on the driver's side. Revelle's coupe functioned as a daily driver and was fit with a stock engine from a 1949 Mercury.[2] The seats were lowered 3 1/2 inches in order to maintain good visibility. Seats, doors and kick panels were upholstered in red and white.[2]

December 1957, Revelle's old coupe was featured on the cover of Rod & Custom. By then it was owned by Richard Stockton. Since its last magazine feature, the 1940 Buick Torpedo fender skirts had been removed.[3]

Please get in touch with us at mail@kustomrama.com if you have additional information or photos to share about Jim Chapkis' 1940 Ford.