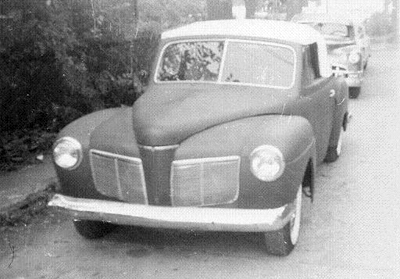 Jack Telnack's 1941 Mercury Convertible. The build was started in 1954 and completed in 1955. After the build was completed, Jay moved to California, attending the Art Center Design School. He sold the car in California in the latter part of the 1950s.

Jack Telnack was born in 1937 at Dearborn's Henry Ford Hospital, his father was a power-plant worker at Ford Motor Company's giant River Rouge factory complex. As a boy he met old Henry Ford himself when the legendary mogul visited a neighbor family. He also remembers many youthful hours spent gazing at the shiny new cars on display in the old Ford Rotunda, and being shooed away from unauthorized visits to the company proving grounds.[1]

After his training at the Art Center Design School in Los Angeles, Telnack began working as a designer for Ford in 1958, and became the head stylist of the Lincoln-Mercury Division in 1965. In 1966, he became the chief designer of Ford's Australian branch and served as the Vice President of Design for Ford of Europe in 1974. He was the former global Vice President of Design of the Ford Motor Company from 1980 to 1997 .Telnack retired from his post at the end of 1997, and was replaced by J Mays.[2]

Telnack and his team of designers were responsible for ushering a new era of aerodynamic design to America's mainstream marketplace. Cars like the 1979 Ford Mustang, 1983 Ford Thunderbird, 1984 Ford Tempo and Lincoln Mark VII were moderate successes that showed Ford's intention to change their traditional design language for a more contemporary, European style.[2]

Telnack's team of designers, known collectively as "Team Taurus", were responsible for the 1986 Ford Taurus: a car widely acknowledged as the main reason why Ford Motor Company's turnaround strategy was successful during this period. The Taurus' wind cheating design language influenced everything from the Ford F-150 to the Lincoln Town Car in the 1990s.[2]

Lesser known cars like the 1986 Mercury Sable boasted a wind cheating drag coefficient of 0.29. The Sable's light bar grille continued to be a Mercury design hallmark for the next decade. Telnack also helped shape the 1989 Ford Probe and 1993 Lincoln Mark VIII. Toward the end of his career, Telnack worked on the ovoid themed Taurus from 1996. While criticized widely and deemed too radical for the market's tastes, Telnack also created the "New Edge" style that brought about cars like the 1996 Ford Ka, Ford GT90 concept car and influenced the design of the 1998 Ford Focus.[2]

Please get in touch with us at mail@kustomrama.com if you have additional information or photos to share about Jack Telnack.