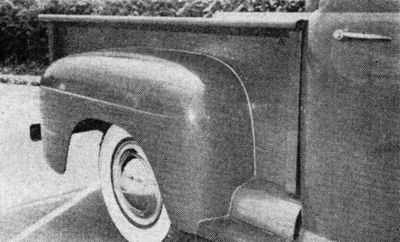 1941 Ford owned and restyled by Jack Rushton of Montebello, California. The top on Jack's truck was chopped three and a half inches before a 1941 Ford passenger car front clip was modified to fit the body. The front clip featured a nosed hood and frenched headlights.. The car was de-chromed but the handles were kept.[1] A 1948 Ford pickup bed was mounted on the frame. The rear-fenders from the passenger car were widened by grafting sheet metal to the fender's inner edges. The gas fill pipe was placed in the the left rear fender, and the gas tank was mounted under the rear of the bed.[2] A pair of 1941 Chevrolet taillights were installed below the tailgate. Once all the bodywork was done, Jack's pickup was painted green and fit with dual spotlights.[1]

The car was sold to Tacoma, Washington in the 1960s, and Dick Page remembers seeing it parked at a service station near his home in Tacoma. By then the truck had been painted red. The car was still located in Tacoma in 2012, but it has been changed a lot since it first was built.[3]

Please get in touch with us at mail@kustomrama.com if you have additional information or photos to share about Jack Rushton's 1941 Ford.